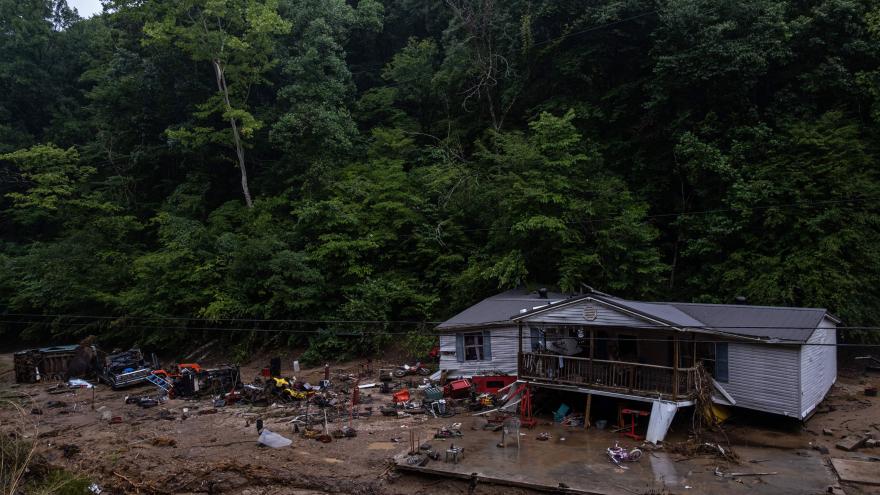 (CNN) -- Rescue workers searching for hundreds of missing people in flood-stricken Kentucky have been hampered by the devastation left behind -- unable to access areas left isolated after floodwater washed away bridges and inundated communities, with even more rainfall forecast for Monday.

The death toll rose Monday to 30, Gov. Andy Beshear said at a news conference in Frankfort, adding, "There are hundreds of unaccounted for people, minimum."

"We just don't have a firm grasp on that. I wish we did -- there are a lot of reasons why it's nearly impossible," he said.

While reading a breakdown of those killed in each county during a news conference Sunday, Beshear became visibly emotional when he reached the four children dead in Knott County. They were identified to CNN by their aunt as siblings Chance, 2; Nevaeh, 4; Riley Jr., 6; and Madison, 8.

"It says 'minors,'" the governor said looking at the list. "They are children. The oldest one is in second grade," Beshear said.

The children -- described as sweet, funny and lovable -- died after the family's mobile home flooded last week, forcing them to seek shelter on the roof, their aunt, Brandi Smith, told CNN Friday.

"They were holding on to them," Smith said of her sister and her partner. "The water got so strong it just washed them away."

The governor believes recovery crews are "going to be finding bodies for weeks," he told NBC's "Meet the Press" on Sunday, "many of them swept hundreds of yards, maybe a quarter-mile plus from where they were last."

There was some good news Monday: Cell service is returning in some of the state's hardest-hit areas, the governor said, which may help people connect with loved ones they've yet to contact.

The flooding swelled over roads, destroyed bridges and swept away entire homes, displacing thousands of Kentuckians, the governor said. At least 150 displaced people are being housed in state parks, he said Monday.

Floodwaters also knocked out vital power, water and roadway infrastructure, some of which has yet to be restored.

In Perry County, as many as 50 bridges are damaged and inaccessible, according to county Judge Executive Scott Alexander.

There remains a slight risk of excessive rainfall throughout the region Monday, according to the National Weather Service, and with the ground already saturated, more rain could bring yet more flooding.

"If things weren't hard enough on the people in this region, they're getting rain right now," Beshear said Monday.

A flood watch is in effect across parts of eastern Kentucky, including the communities of Jackson, Hazard, Pikeville, West Liberty and Morehead.

Overnight Monday into Tuesday morning, the area could see a line of heavier rain and the chance for severe thunderstorms with a threat of damaging winds and more flash flooding.

Temperatures are then expected to rise, hitting the mid-80s and near 90 on Wednesday and Thursday, per the weather service, but it will feel much hotter because of the humidity. The heat indices -- the temperature it feels like when heat is combined with humidity -- are expected to peak around 100 degrees in some places, leaving rescue crews and displaced people facing oppressive heat as more than 14,000 customers remain without power.

As the climate crisis fuels more extreme and frequent weather events, several areas of the US are currently experiencing flash flood risk, including swathes of the desert Southwest, Knoxville, Tennessee, and Tucson, Arizona.

Region in desperate need of resources

Kentucky State Police are still actively searching for missing residents in several counties and ask that families inform law enforcement if their loved one is unaccounted for.

Meantime, state officials are immediately focused on getting food, water and shelter to the people who were forced to flee their homes.

Power outages and storm damage left 22 water systems operating in a limited capacity, a Sunday news release from the governor's office said. More than 60,000 water service connections are either without water or under a boil advisory, it said.

Officials overseeing the recovery efforts say bottled water, cleaning supplies and relief fund donations are among the most needed resources as the region works toward short and long term recovery. FEMA is providing tractor trailers full of water to several counties.

"A lot of these places have never flooded. So if they've never flooded, these people will not have flood insurance," the mayor of Hazard, Kentucky, Donald Mobelini told CNN on Saturday. "If they lose their home, it's total loss. There's not going to be an insurance check coming to help that. We need cash donations," he said, referring to a relief fund set up by the state.

Beshear established a Team Eastern Kentucky Flood Relief Fund to pay the funeral expenses of flood victims and raise money for those impacted by the damage. As of Sunday morning, the fund had received more than $1 million in donations, according to the governor.

The federal government has approved relief funding for several counties. FEMA is also accepting individual disaster assistance applications from impacted renters and homeowners in Breathitt, Clay, Knott, Letcher and Perry counties, the governor said, noting he thinks more counties will be added to the list as damage assessments continue.

Though the recovery effort was still in the search-and-rescue phase over the weekend, Beshear said in a news conference Saturday that he believes the losses will be "in the tens if not the hundreds of millions of dollars."

"This is one of the most devastating, deadly floods that we have seen in our history," Beshear said told NBC on Sunday. "It wiped out areas where people didn't have that much to begin with."

And it wasn't just personal possessions washed away by the floodwaters. A building housing archival film and other materials in Whitesburg, was impacted, with water submerging an irreplaceable collection of historic film, videotape and audio records that documented Appalachia.

The beloved media, arts and education center, Appalshop, held archival footage and film strips dating as far back as the 1940s, Appalachian filmmaker Mimi Pickering told CNN, holding the stories and voices of the region's people. Employees and volunteers were racing to preserve as much material as they could.

"We're working as hard and fast as we can to try to save all that material ... The full impact, I don't think has totally hit me yet. I think I don't really want to think about it," Pickering said. She noted the Smithsonian and other institutions have reached out offering assistance.

The extensive loss Kentuckians are suffering will likely also take a mental toll, Frances Everage, a therapist and 44-year resident of the city of Hazard told CNN. While her home was spared, she said some of her friends have damaged homes or lost their entire farms.

"When you put your blood, sweat and tears into something and then see it ripped away in front of your eyes, there's going to be a grieving process," Everage said. "This community will rebuild and we will be okay, but the impact on mental health is going to be significant."