Kentucky Derby will run without fans in the stands 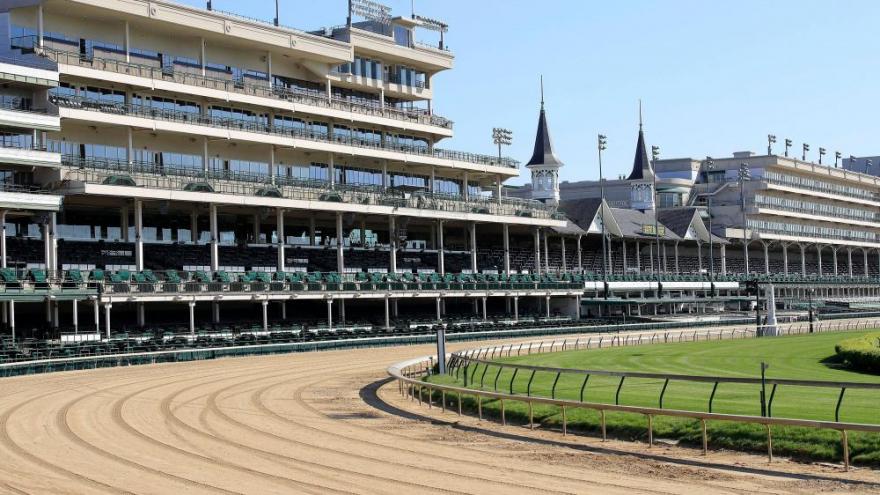 A view of the twin spires and empty grandstand from the first turn at Churchill Downs in Louisville, Kentucky, where the Kentucky Derby is run.

(CNN) -- Just over a week after announcing that the Kentucky Derby would allow fans in the stands to witness the 146th edition, organizers have changed their minds.

The rescheduled Run for the Roses will now be held without spectators.

Churchill Downs originally said it would allow 14% capacity at the racetrack (some 23,000 fans) for the Triple Crown race that was postponed from the first Saturday in May until September 5.

"The Kentucky Derby is a time-honored American tradition which has always been about bringing people together," the Churchill Downs Friday announcement said. "However, the health and safety of our team, fans and participants is our highest concern."

"Churchill Downs has worked diligently over the last several months to plan a safe Derby with a limited number of spectators in attendance. We were confident in the plan, but dedicated to remaining flexible using the best and most reliable information available. With the current significant increases in Covid-19 cases in Louisville as well as across the region, we needed to again revisit our planning.

"We deeply regret the disappointment this will bring to our loyal fans."

Kentucky Gov. Andy Beshear supported the decision, saying, "The virus is still aggressively spreading in Kentucky, and the White House has announced that Jefferson County and the City of Louisville are in a 'red zone' based on increases in cases ... I applaud Churchill Downs for continuing to monitor the virus and for making the right and responsible decision."

The Belmont Stakes, one third of the Triple Crown, took place without spectators in attendance on June 20 in Elmont, New York.

The Preakness Stakes is slated for October 3 at Pimlico Race Course in Baltimore, Maryland.

It's uncertain if fans will be allowed for the Preakness. The race website says tickets have temporarily been taken off sale because of uncertainty about capacity.