Kentucky Derby: How to watch and major storylines 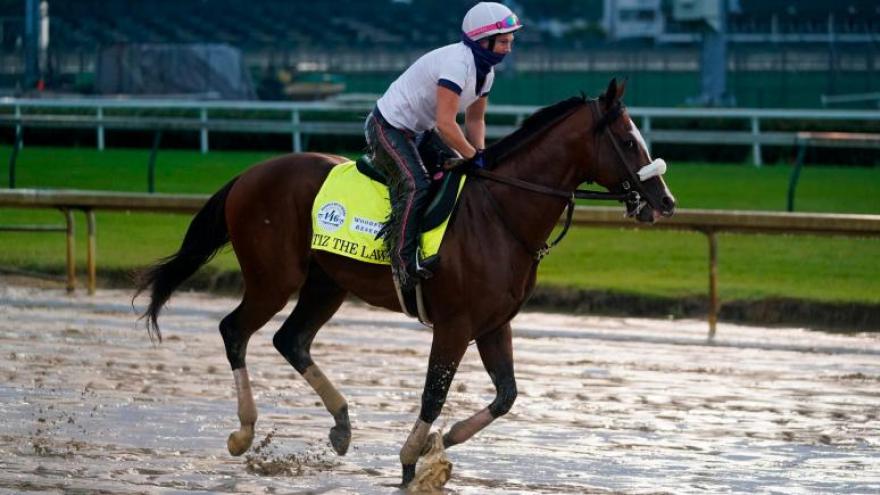 Tiz the Law won the Belmont Stakes and is making a run for the Triple Crown.

(CNN) -- The 146th running of the Kentucky Derby, typically the first leg of the Triple Crown of horse racing, takes place this Saturday, September 5.

Traditionally, the race has been held on the first Saturday of May, but the coronavirus pandemic forced race organizers to postpone the contest.

The Belmont Stakes, usually the final race of the Triple Crown, was held before the Kentucky Derby this year, on June 20, with Tiz the Law crowned the winner.

The Kentucky Derby, one of the longest-running sporting events in the US, will be a very different experience this year, as organizers will not allow spectators at Churchill Downs.

Event organizers originally planned to allow spectators at 14% capacity, which amounts to about 23,000 fans. However, the organizers changed course and say they "deeply regret the disappointment this will bring to our loyal fans."

"The Kentucky Derby is a time-honored American tradition which has always been about bringing people together," the organizers said in a press release. "However, the health and safety of our team, fans and participants is our highest concern. With the current significant increases in Covid-19 cases in Louisville as well as across the region, we needed to again revisit our planning."

"The virus is still aggressively spreading in Kentucky, and the White House has announced that Jefferson County and the City of Louisville are in a 'red zone' based on increases in cases," Beshear said. "I applaud Churchill Downs for continuing to monitor the virus and for making the right and responsible decision."

NBC will begin airing coverage on Saturday, September 5, at 2:30 p.m. ET on NBC, the NBC Sports app and on its website.

While pre-race coverage begins in the early afternoon, post time for the main event is set for 7:01 p.m. ET.

Tiz the Law is the favorite in the field, which started at 18 horses and dropped to 16 after two late scratches. The New York-bred horse dominated the Belmont Stakes, and a win at the Kentucky Derby would bring him and trainer Barclay Taggs one step closer to winning the Triple Crown.

If Tiz the Law wins the Derby, he would be the first horse to break from his starting position at post 17 to take the race, according to Churchill Downs.

There have only been 13 Triple Crown winners in horse racing history, with Justify being the last horse to accomplish the feat in 2018.

Art Collector, King Guillermo and Finnick the Fierce are out

Art Collector was one of the favorites heading into the race, but an injury will not allow him to participate at the Run for the Roses.

Art Collector "nicked the bulb of his left front heel with a hind hoof while galloping," according to a release.

"He grabbed himself yesterday morning training," trainer Tommy Drury said. "It was still very sensitive this morning. When I took my thumbs to palpate the bulbs of his heels, you could still tell it was pinching him. I had to make a choice. Your horse has to always come first. To run in a race of this caliber and trying to compete against the best 3-year-olds in this country, you've got to be 110 percent."

King Guillermo came down with a fever, and trainer Avila Juan Carlos tweeted that he will not be running in the race. King Guillermo was slated to start at post 6.

Authentic could challenge Tiz The Law

Authentic will be coming out of the gate racing right next to Tiz the Law. Despite the unfavorable position, Authentic is an 8-1 favorite to win the Derby.

The horse recently won the Haskell Stakes and has Hall of Fame trainer Bob Baffert in his corner. Baffert trained American Pharoah and Justify, the last two thoroughbreds to win the Triple Crown.

However, it is a slave song that was inspired by the novel "Uncle Tom's Cabin." Considering the social unrest taking place in Louisville and across the country, there have been calls to break tradition and stop singing the song.

"After careful consideration, My Old Kentucky Home will be played this year prior to the @KentuckyDerby," a spokesman for Churchill Downs wrote in a tweet. "However, the 100-year tradition of singing the state song of Kentucky has been thoughtfully & appropriately modified & will be preceded by a moment of silence and reflection."

A rendition of the song will be played solo by bugler Steve Buttleman instead of the University of Louisville's marching band, a spokesman confirmed to CNN.