Kenosha shooting suspect called a friend to say he 'killed somebody,' police say, and then shot two others 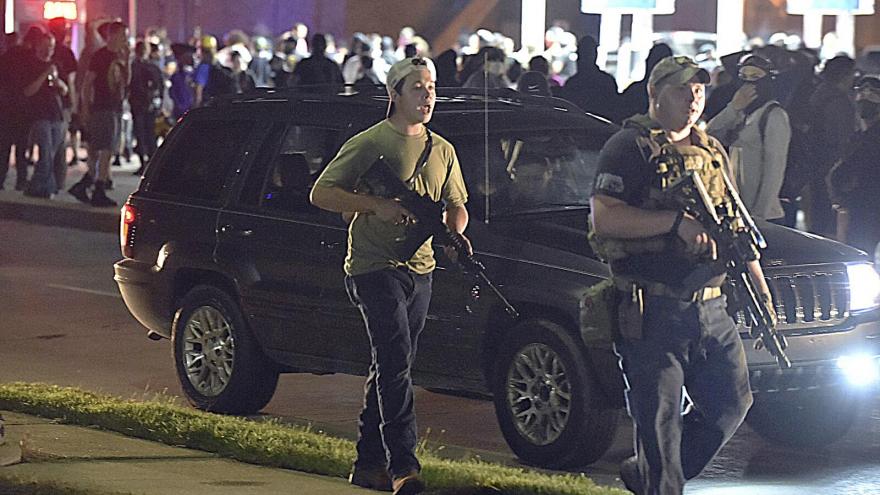 Kyle Rittenhouse, left, with backwards cap, is shown on Aug. 25, the night of the shooting, in Kenosha, Wisconsin.

(CNN) -- Just before midnight Tuesday, a young male clutching a long rifle wandered around the dark streets of Kenosha in a backward baseball cap and a green T-shirt.

Protesters in the Wisconsin city were demanding justice after an officer shot local resident Jacob Blake seven times in the back while his children watched from his car. As the 29-year-old Black man fought for his life at the hospital following the Sunday shooting, people marched, chanted and asked why for three days. At times, demonstrators and armed civilians faced off.

Then things took a deadly turn.

The teenager with the long gun scuffled with people near a car dealership and opened fire, allegedly killing two people and wounding a third, a criminal complaint says. Even as police and emergency vehicles raced to the scene and chaotic videos of the fatal encounter appeared on social media, the armed suspect walked past a group of officers unnoticed. He was arrested 30 miles away in Antioch, Illinois.

Kyle Rittenhouse, 17, is facing charges that he allegedly killed Anthony M. Huber and Joseph Rosenbaum. Before the shooting, he told a journalist who was trailing him that he was a trained medic, a criminal complaint says.

In a brief video hearing Friday, an Illinois judge agreed to postpone a decision on whether Rittenhouse would be extradited to Wisconsin until at least September 25. Rittenhouse did not appear at the hearing, which lasted only a few minutes.

An attorney representing Rittenhouse says his client was acting in self-defense when he opened fire.

In a statement to NBC News attorney John Pierce said, "This was classic self-defense and we are going to prove it. We will obtain justice for Kyle no matter how hard the fight takes or how long it takes."

How the deadly confrontation started

About 11:45 p.m. Tuesday -- hours after the 8 p.m. curfew -- Rittenhouse was walking down the streets near the car dealership holding what investigators later determined to be "a Smith & Wesson AR-15 style .223 rifle," the criminal complaint says.

Social media accounts believed to belong to him portray a young White man with an affinity for guns who supports "Blue Lives Matter" and President Donald Trump. A video posted on a Snapchat account believed to belong to him placed him at the scene of protests Tuesday night. The clips show a few seconds of the point of view of someone carrying a long rifle and police announcements can be heard over loudspeakers.

At those demonstrations, the complaint states, Rittenhouse clashed with people gathered near the car dealership for reasons not specified. Rosenbaum was unarmed and threw an object that appeared to be a plastic bag at him and missed, according to the complaint.

Rosenbaum and the suspect moved across the parking lot and appeared to be in close proximity when loud bangs suddenly rang out and Rosenbaum fell to the ground, according to the complaint.

As Rosenbaum lay on the ground, the suspect made a call on his cellphone and said, "I just killed somebody" as he ran away, the complaint alleges. His friend received a call from him at 11:46 p.m. saying that he shot someone, an investigator says in the complaint.

Another video shows the suspect running from the scene followed by people in hot pursuit.

The suspect tripped and fell as people chased him down, and as he lay on the ground, a second person identified as Huber approaches him with a skateboard in his right hand, the complaint says.

"When Huber reaches the defendant it appears that he is reaching for the defendant's gun with his left hand as the skateboard makes contact with the defendant's left shoulder. ... The defendant rolls towards his left side and as Huber appears to be trying to grab the gun. the gun is pointed at Huber's body. The defendant then fires one round ... Huber staggers away, taking several steps, then collapses to the ground," the complaint says.

After shooting Huber, the suspect points his gun at a third male approaching the suspect, later identified as Gaige Grosskreutz, the complaint says. He was shot in the right arm and takes off in the opposite direction screaming for a medic while the defendant walks away, the complaint alleges.

Rittenhouse was able to leave the shooting scene still armed because he walked toward officers with his hands up, Kenosha Police Chief Daniel Miskin said during a media briefing on Friday.

There were a lot of people with weapons, "and unfortunately, a lot of gunfights," Miskinis said.

Officers were driving into "a shots fired complaint, not a shooting, not a person down complaint. We have had many of those over the course of this unfortunately," Miskinis said.

"They're responding to that, they see somebody walking towards them with his hands up, that too isn't out of the ordinary given how events have been going on," said Miskinis. "We have armed individuals out protesting or simply walking around exercising (their) right."

Rittenhouse is facing two felony charges of homicide in the death of Rosenbaum and Huber, and a felony attempted homicide charge in Grosskreutz's incident. Court records show he's also being charged with possession of a dangerous weapon while under the age of 18, which is a misdemeanor.

Grosskreutz's attorney, Kimberley Motley, told CNN Friday there were many unanswered questions in this shooting. In the criminal complaint against Rittenhouse, prosecutors said that Grosskreutz was armed at the time of the shooting, but the complaint did not mention whether police had recovered a firearm believed to belong to Grosskreutz. Attorneys representing Rittenhouse have claimed he was acting in self-defense.

"I think the question that really should be asked is why didn't anyone arrest Mr. Rittenhouse that night?" she said, adding that neither she nor her client believe Rittenhouse acted alone. "Why did Mr. Rittenhouse come wearing an armed weapon with gloves on with the intent, I believe, to shoot people?"

Wisconsin is an open-carry state, but children under age 18 are not allowed to carry weapons openly in public.