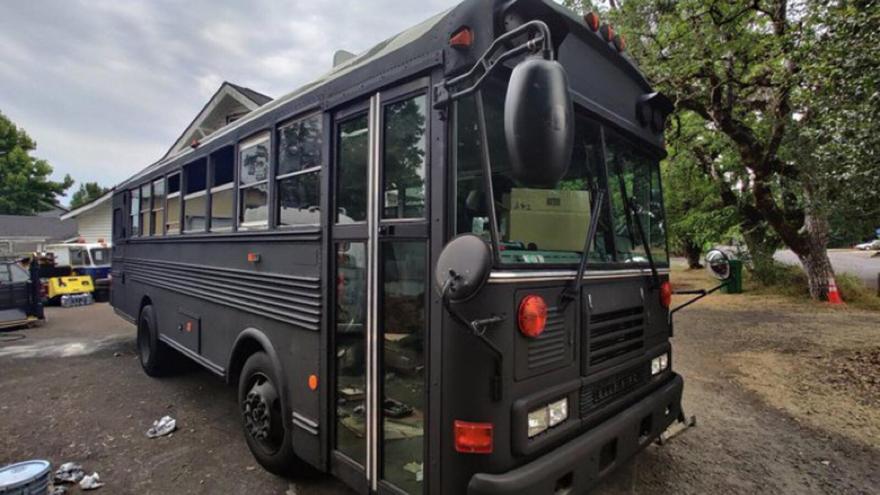 Volunteers with the organization Riot Kitchen were arrested at a gas station in Kenosha, Wisconsin, on August 26.

(CNN) -- Nine people who were arrested by police in Kenosha, Wisconsin, last week after their vehicles aroused suspicion, were volunteers on their way to deliver food to protesters, according to group organizers.

Leaders from Riot Kitchen, a group formed to feed protesters in Seattle in the aftermath of George Floyd's death, told CNN that volunteer crew members had been planning to join a caravan headed to help feed demonstrators at Friday's March on Washington when they were arrested at a Kenosha gas station on Wednesday.

The leaders who spoke to CNN asked that their names not be published out of concerns for their safety.

At the time, volunteers were refueling vehicles and getting gas for the generator they use for cooking, the organization said in an August 28 statement on Twitter.

"Our crew was arrested by officers who did not identify themselves with drawn guns," the statement read. "Our volunteers were thrown into holding cells and kept for hours without water or blankets and denied phone calls to their loved ones."

It is unclear why the volunteers ended up in Kenosha. They have since been released, Riot Kitchen said.

The Kenosha Police Department did not immediately respond to CNN's request for comment.

However, the police department said in a news release on August 27 that officials had arrested nine people on August 26 for disorderly conduct after being tipped off about "suspicious vehicles with out of state plates meeting in a remote lot."

The department said that officers located the vehicles -- a black school bus, a bread truck and a tan minivan -- and began surveillance with the assistance of US Marshals. Police then followed the vehicles to a gas station, according to the news release.

"Police observed the occupants of the black bus and bread truck exit and attempt to fill multiple fuel cans," the news release states. "Suspecting that the occupants of these vehicles were preparing for criminal activity related to the civil unrest, officers attempted to make contact and investigate."

The officers exited their vehicles and detained the people inside the bus and bread truck, the department said. Police said that the minivan attempted to drive away, but that officers stopped the vehicle and forcibly entered it, arresting those inside.

Police said there were "helmets, gas masks, protective vests, illegal fireworks and suspected controlled substances" inside the vehicles. Riot Kitchen said that the gear was intended as protection for serving large crowds.

"We reject all claims that our crew was there to incite violence or build explosives," Riot Kitchen said in its statement. "Our nonprofit organization has always been and always will be about feeding people."

Riot Kitchen directed further questions about the incident to its statement posted on social media.

The news comes after the police shooting of Jacob Blake, a 29-year-old Black man, which prompted days of protests and civil unrest in Kenosha.

Two protesters have been killed, as police continue to garner scrutiny over the incident.

Kenosha police officers arrested a total of 175 people last week, the department said in a statement posted to Twitter.

That number includes people from 44 different cities and that 102 people "listed addresses from outside Kenosha," the department added.

Additionally, Kenosha Police say that more than 20 firearms were taken and 3 vehicles were towed as part of active investigations.

CNN affiliate WISN-TV reported that officers or federal agents seized a U-Haul truck loaded with snacks, drinks and medical supplies on August 26 and arrested a driver and passenger inside.

The supplies had been sent by Zao MKE Church in Milwaukee, Pastor Jonah Overton told CNN.

Community members in Kenosha had learned of the church's efforts to aid protesters and contacted the church, saying they had rented a U-Haul vehicle that could take supplies to protesters in Kenosha, Overton wrote in an email to CNN.

The U-Haul arrived in the afternoon on August 26 and church members loaded it up with water, Gatorade, fire extinguishers, first aid supplies, face masks and megaphones, Overton said.

"The purpose of those supplies was to provide humanitarian support to protestors in the form of food, water, first aid, and safety/protective materials," Overton said.

"The law enforcement agents rammed their vehicle into the U-Haul before driving it away. The driver was briefly detained, we have since learned that the passenger was not. Neither are members of Zao MKE Church. They have not received any of the supplies back."

Kenosha Police Chief Daniel Miskinis said he wasn't aware of the incident when asked about it at a news conference on Friday.