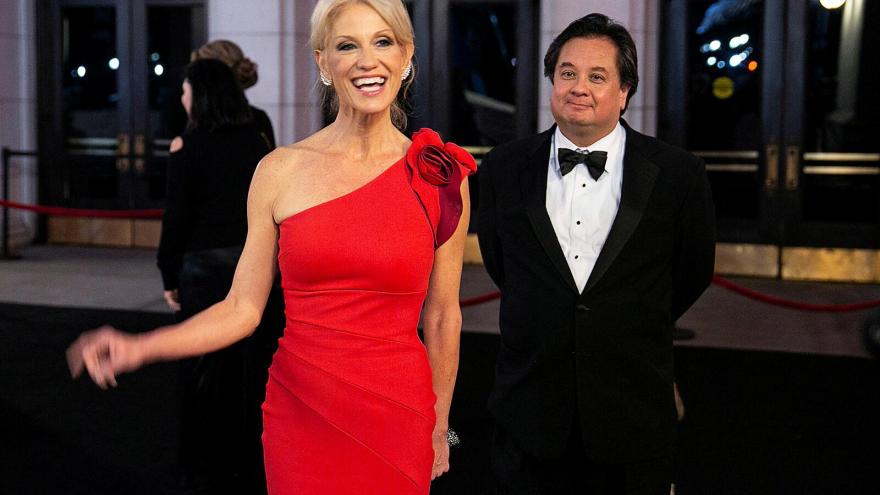 (CNN) -- White House counselor Kellyanne Conway announced Sunday evening she will leave her post at the end of the month while her husband, George Conway, said he was withdrawing from The Lincoln Project, both citing a need to focus on their family.

"I will be transitioning from the White House at the end of this month. George is also making changes," Kellyanne Conway said in a statement.

"We disagree about plenty but we are united on what matters most: the kids. Our four children are teens and 'tweens starting a new academic year, in middle school and high school, remotely from home for at least a few months. As millions of parents nationwide know, kids 'doing school from home' requires a level of attention and vigilance that is as unusual as these times."

George Conway tweeted minutes earlier that he was withdrawing from The Lincoln Project -- a group formed by anti-Trump Republicans -- to "devote more time to family matters."

One of the Conways' high school-aged daughters has generated attention on social media about her family and their political views over the last several months.

The Sunday evening announcement marks an abrupt end to Kellyanne Conway's high-profile time in the White House where she earned a reputation as one of the President's fiercest -- and most controversial -- defenders. She landed her position in 2016 after becoming the first female campaign manager to win a presidential race.

But political tension with her husband had spilled into public view in recent years.

A Washington lawyer who was considered for multiple Justice Department posts early in Trump's tenure, George Conway quickly emerged as a prominent critic of the President.

He's previously said that Trump is "guilty" of being unfit for office, called for Congress to remove the "cancer" of Trump from the presidency and openly questioned the President's mental health.

His opposition took on new meaning when he joined The Lincoln Project.

Each of the Lincoln Project principals had aligned themselves with the "NeverTrump" movement in the 2016 election and have been outspoken critics of Trump and the Republican Party ever since.

Earlier Sunday, George Conway had said in a tweet thread "I *may* be taking a Twitter hiatus soon" before listing out some of his critical op-eds about the President.

Still, Kellyanne Conway maintained in her statement Sunday that "the incredible men, women and children we've met along the way have reaffirmed my later-in-life experience that public service can be meaningful and consequential."

"For all of its political differences and cultural cleavages, this is a beautiful country filled with amazing people. The promise of America belongs to us all," Kellyanne Conway said.

She also stressed that the decision "is completely my choice and my voice."

"In time, I will announce future plans. For now, and for my beloved children, it will be less drama, more mama," she said.

This story has been updated Monday with additional details.