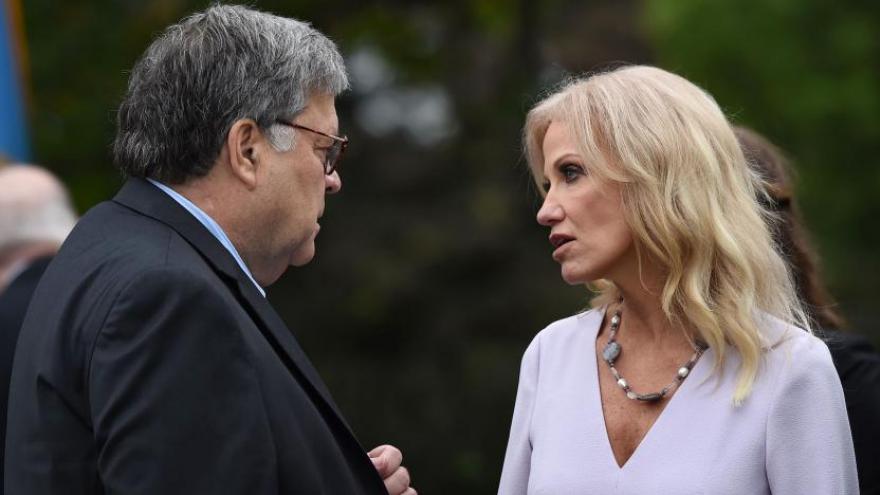 Former White House counselor Kellyanne Conway announced Friday night that she has tested positive for coronavirus. This photo shows Conway speaking with US Attorney General William Barr at the White House in Washington, DC, on September 26, 2020.

"Tonight I tested positive for COVID-19. My symptoms are mild (light cough) and I'm feeling fine. I have begun a quarantine process in consultation with physicians," Conway tweeted. "As always, my heart is with everyone affected by this global pandemic."

Many of the guests for Trump's announcement that he was nominating Judge Amy Coney Barrett arrived at the event with masks on, but as the Rose Garden event got underway, masks were virtually nonexistent.

Some of the Trump administration's top health officials, as well as other attendees, were seen not wearing masks or social distancing at the highest-profile event at the White House since the Republican National Convention in August.

Conway also had interacted with Trump and other advisers since Saturday, CNN has reported, participating in debate prep sessions with the President on Sunday and Monday, people familiar with the matter told CNN.

Kellyanne Conway's husband, George Conway, appeared to weigh in on the news with a jab at the President.

"I can relate," he tweeted Friday night of a news story about frustrated Secret Service agents asserting that the President's actions have put them at risk of catching coronavirus.

Kellyanne Conway had announced in August that she would leave her post at the end of the month, while her husband said he was withdrawing from his work on the anti-Trump Republican group The Lincoln Project, both citing a need to focus on their family.

Her departure marked an abrupt end to her high-profile tenure at the White House, where she earned a reputation as one of the President's fiercest -- and most controversial -- defenders.

Conway came to the President's defense when he repeatedly used racist rhetoric when referring to the coronavirus, and she spun the federal response to the pandemic in order to present the administration in a positive light.

She landed her position in 2016 after becoming the first female campaign manager to win a presidential race, asserting during her remarks at the National Republican Convention this August that "President Trump helped me shatter a barrier in the world of politics, by empowering me to manage his campaign to its successful conclusion."

But she also faced controversies. Last year, the US Office of Special Counsel recommended that she be removed from federal service, saying she had violated the Hatch Act on numerous occasion and erred by "disparaging Democratic presidential candidates while speaking in her official capacity during television interviews and on social media."

Political tension with her husband had also spilled into public view in recent years. A Washington lawyer who was considered for multiple Justice Department posts early in Trump's tenure, George Conway quickly emerged as a prominent, outspoken critic of the President.

He's previously said Trump is "guilty" of being unfit for office, called for Congress to remove the "cancer" of Trump from the presidency and openly questioned the President's mental health.

But Kellyanne Conway has pushed back. Last year, after her husband's tweets cast doubt on Trump's mental state, she told reporters that "no, I don't share those concerns."

The President himself took a more lighthearted approach. Asked about a critique that George Conway issued last November, Trump made clear where his allegiance stood.

This story has been updated with more details and background information.