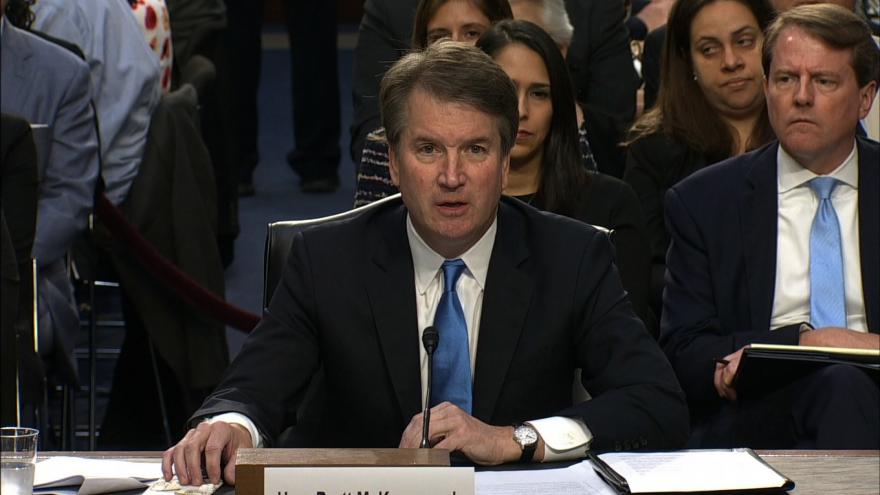 WASHINGTON (AP) — Christine Blasey Ford wants the FBI to investigate her allegation that she was sexually assaulted by Supreme Court nominee Brett Kavanaugh before she testifies at a Senate Judiciary Committee hearing next week, her lawyers said in a letter to the panel.

The lawyers wrote that Ford, who is now a college professor in California, wants to cooperate with the committee. But in the days since she publicly accused Kavanaugh of the assault when they were teens at a party 35 years ago, the lawyers said, she has been the target of "vicious harassment and even death threats." Her family has relocated, they said.

An FBI investigation "should be the first step in addressing the allegations," the lawyers wrote in the Tuesday letter, which was obtained by The Associated Press.

The development came after President Donald Trump showered sympathy on his embattled nominee and as Senate Republicans and Democrats fought determinedly over who should testify at a high-stakes hearing on the allegation just six weeks before major congressional elections.

Trump has already rejected the idea of bringing in the FBI to reopen its background check of Kavanaugh. Should he order such a review, it would likely delay a confirmation vote until after the election. Republicans hope to have Kavanaugh confirmed by Oct. 1, the start of the next Supreme Court term.

In a tweet Tuesday night, Trump wrote: "The Supreme Court is one of the main reasons I got elected President. I hope Republican Voters, and others, are watching, and studying, the Democrats Playbook."

Meanwhile, Republicans are suggesting that Ford, whose allegations have upended Kavanaugh's nomination — the committee's vote was already pushed from Thursday to likely next week — will have one chance to testify, and one chance only.

"Monday is her opportunity," Senate Majority Leader Mitch McConnell, R-Ky., said Tuesday, a line that was echoed by other Republicans throughout the day.

McConnell expressed confidence that Kavanaugh would be confirmed. "I'm not concerned about tanking the nomination," he said.

The GOP chairman of the Judiciary Committee, Chuck Grassley of Iowa, said an FBI investigation wouldn't have bearing on Ford's testimony so "there is no reason for further delay."

Grassley said the committee offered Ford "the opportunity to share her story" in a public or a private hearing, or staff interviews, "whichever makes her most comfortable. The invitation for Monday still stands."

Said Sen. Orrin Hatch of Utah, a key Republican on the panel, said, "We should proceed as planned."

The furious jockeying over Ford's testimony underscores the political potency so close to an election that will decide control of both the House and Senate, not to mention the confirmation of a conservative justice likely to serve on the high court for decades.

Democrats complain that Ford was not consulted before the hearing was announced. They also want more witnesses besides Kavanaugh and Ford, hoping to avoid what they said would turn into a "he-said-she-said" moment.

The lawyers for Ford predicted the hearing, as now scheduled, "would include interrogation by senators who appear to have made up their minds" that she is "mistaken" and mixed up.

But Democrats also said Tuesday they were planning to attend the hearing even if Ford did not show up.

Sen. Dick Durbin, D-Ill., said he had "a lot of questions" for Kavanaugh. "A simple denial is not the end of questioning."

As Democrats press for more time to investigate, Republicans have been careful to say that Ford should have her chance to speak, and they have stressed that they are willing to move Monday's hearing behind closed doors, if she prefers.

"Were planning on a hearing Monday. It can be open. It can be closed, whatever Ms. Ford wants," said Sen. John Kennedy, a member of the Judiciary panel from Louisiana. "We're ready to hear anything she has to say. I am, anyway, and I think most of us are."

GOP Sen. Bob Corker of Tennessee — among a handful of Republicans who insisted on hearing from Ford before voting — said it would be a "shame" if Ford didn't show up to testify. But he suggested Republicans will not bend from their offer of a hearing Monday.

"That would be quite something if she decided she did not want to testify," Corker said. "I'd assume the committee would then move on as they should."

One witness the Democrats want to hear from is Kavanaugh's high school friend Mark Judge, who Ford said was in the room when she was assaulted. Kavanaugh has denied Ford's allegation, and Judge says he doesn't remember any such thing. "More to the point, I never saw Brett act in the manner Dr. Ford describes," Judge said in a letter to the panel.

The risks of a public hearing starring the all-male lineup of Republicans on the committee could be high. Republicans said late Tuesday they were considering hiring outside attorneys, presumably including women, to question the witnesses. But that may be moot if Ford declines to appear.

Kavanaugh, 53, was at the White House on Tuesday for a second straight day, but again did not meet with Trump. The president said he was "totally supporting" Kavanaugh and felt "terribly" for him and his family.

The No. 2 Senate Republican leader, John Cornyn of Texas, noted that Ford has admitted she doesn't remember some details of the incident. He called the allegations a "drive-by attack" on the judge's character.

"There are gaps in her memory," Cornyn said. "She doesn't know how she got there, when it was and so that would logically be something where she would get questions."

Criticism like that fed a Democratic narrative that the GOP's handling of Ford could jeopardize that party's election prospects in the age of #MeToo, the response to sexual abuse that has torched the careers of prominent men.

"Now this is really what #MeToo is all about, if you think about it," said Sen. Dianne Feinstein of California, the top Judiciary Committee Democrat. "That's sort of the first thing that happens, it's the woman's fault. And it is not the woman's fault."

Meanwhile, Kavanaugh has been calling Republican senators, including Kennedy, who said the nominee was committed to moving forward.

"He's not happy, he's upset," Kennedy said. "He said very clearly and unequivocally, 'This did not happen.'"

Ford went public with her story Sunday, telling The Washington Post that Kavanaugh had forced himself on her in a bedroom at a party when he was 17 and she was 15, attempting to remove her clothes and clapping his hand over her mouth when she tried to scream. She says she escaped when Judge jumped on the bed.