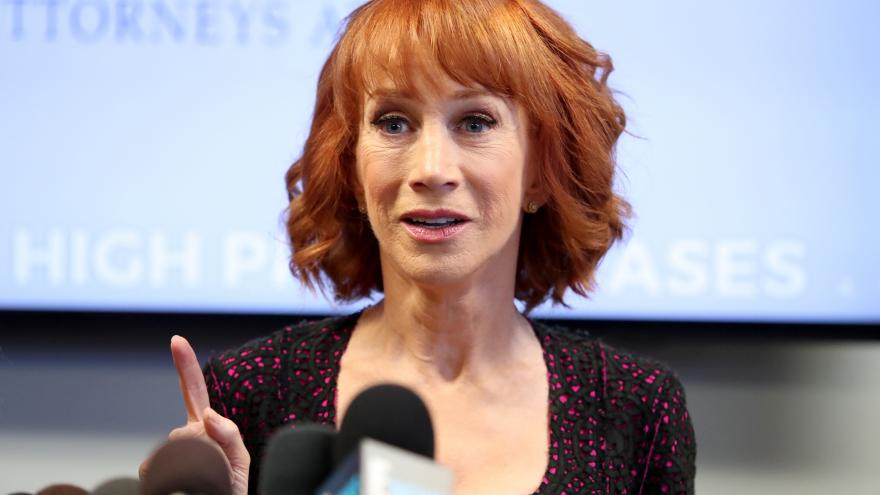 (CNN) -- Years after Kathy Griffin shaved her head in solidarity with her sister who was undergoing chemotherapy, the comedian and actress has announced she has lung cancer.

"I've got to tell you guys something. I have cancer," Griffin began a note posted Monday on her verified Instagram account.

"I'm about to go into surgery to have half of my left lung removed," the note continued. "Yes, I have lung cancer even though I've never smoked!"

Griffin's doctors "are very optimistic" that the cancer is stage one and contained to her left lung, she said.

The star's expectation is that she will not have to undergo chemotherapy or radiation and that she should "be up and running around as usual in a month or less," the note read.

"It's been a helluva 4 years, trying to get back to work, making you guys laugh and entertaining you, but I'm gonna be just fine," Griffin wrote, apparently referencing backlash that followed a controversial photo shoot she did holding a fake, bloody head that resembled Donald Trump.

She ended the note encouraging her followers to stay up-to-date on their medical checkups. Lung cancer is the third most common cancer in the US, according to the CDC.

In July 2017, Griffin shaved her head in honor of her sister Joyce who was battling cancer; her sister died that September. Griffin also lost her brother Gary to cancer in 2014.

Griffin's mother Maggie, who had her own fan base thanks to her famous daughter, died last year at the age of 99 after suffering from dementia.