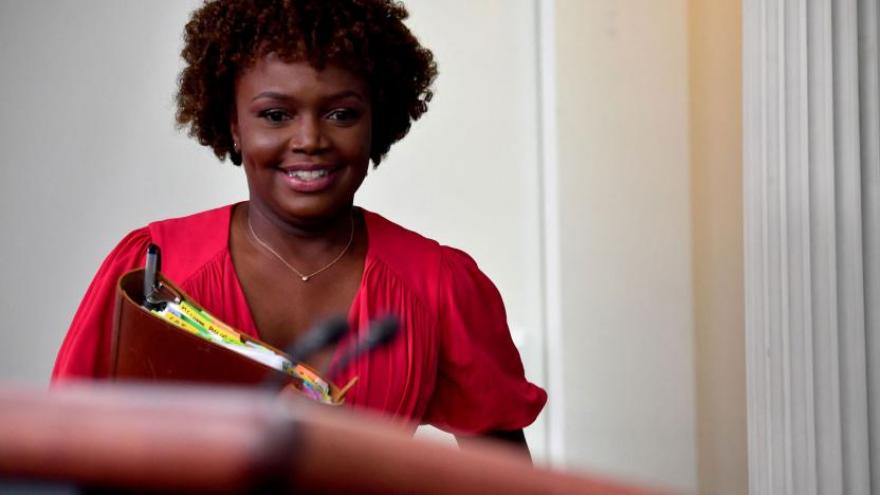 New White House Press Secretary Karine Jean-Pierre arrives to speak to reporters in the James S Brady Press Briefing Room of the White House in Washington, DC, on May 16.

(CNN) -- Karine Jean-Pierre held her first briefing as White House press secretary on Monday after making history as the first Black and out LGBTQ person to step into one of the most visible roles in the administration.

"I am a Black, gay, immigrant woman. The first of all three of those to hold this position," Jean-Pierre told reporters on Monday.

She said, "If it were not for generations of barrier-breaking people before me I would not be here. But I benefit from their sacrifices, I have learned from their excellence and I am forever grateful to them."

"Representation does matter -- you hear us say this often in this administration, and no one understands this better than President (Joe) Biden," Jean-Pierre said.

Jean-Pierre has briefed reporters in her previous role of principal deputy White House press secretary many times, both from the podium in the White House briefing room but more often off-camera on Air Force One. Last May she became the second Black woman in history to hold the daily press briefing.

She has served on the White House's senior communications team since Biden took office, and prior to that was an adviser to his campaign and chief of staff to now-Vice President Kamala Harris. Jean-Pierre has traveled with the President on several occasions, including when she replaced Psaki at the last minute for Biden's four-day trip to Europe amid Russia's invasion of Ukraine after Psaki tested positive for Covid-19.

Psaki had long been public about her intention to leave the job after one year. CNN has reported Psaki will be joining MSNBC.

After Psaki's departure and Jean-Pierre's promotion was announced by the President, Psaki invited Jean-Pierre up to the podium and gave an emotional tribute to her colleague and friend. The two women embraced as Psaki went through Jean-Pierre's qualifications and the significance of her taking the job.

"She will be the first Black woman, the first out LGBTQ+ person to serve in this role, which is amazing because representation matters and she is going to, she will give a voice to so many and allow and show so many what is truly possible when you work hard, and dream big and that matters, and ... we should celebrate that," Psaki said.