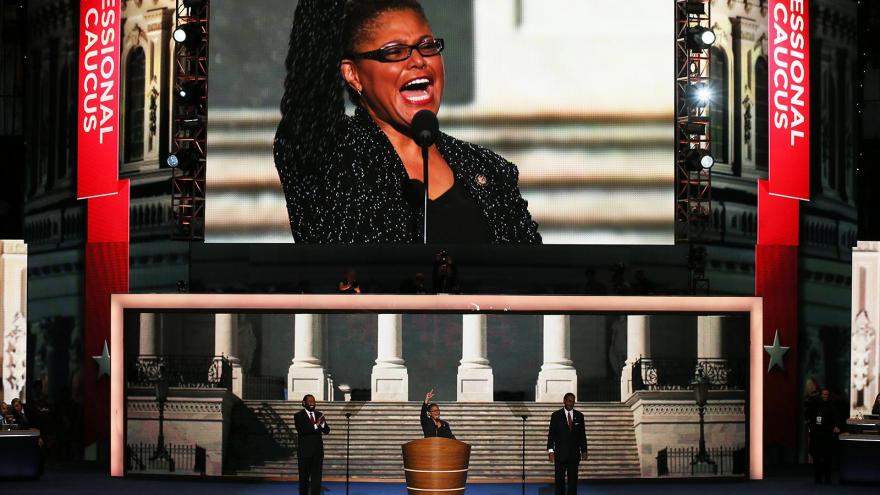 (CNN) -- Karen Bass was mostly unknown outside of California when her name popped up as a potential running mate to presumptive Democratic presidential nominee Joe Biden.

Her emergence was greeted with a round of mostly glowing reviews. The 66-year-old chairwoman of the Congressional Black Caucus is roundly respected by her colleagues in the House, a body otherwise riven by partisan bickering and testy factional feuds. Republicans in California have sung her praises. Progressive Democrats, resigned to the unlikelihood of Biden's choosing Sen. Elizabeth Warren, perked up as rumors of her rise proliferated.

But those early days, of roughly two weeks ago, now seem a distant past.

Bass over the course of a few days has been confronted with a wave of coverage detailing a series of potentially problematic past affiliations, speeches and financial dealings. The pointed succession of stories underscored one of the biggest hurdles Bass faces as Biden buckles down to make his pick: She has never faced the potent, prying brand of national scrutiny endured by those who have run in presidential or high-profile statewide races.

Some of the stories would have caused a stir in any campaign. Others, ginned up by conservative media and amplified by President Donald Trump's campaign, might have been more readily shrugged off. But with Trump struggling to negatively define Biden, the swirl of headlines, as much as the substance beneath them, could endanger her place among his vice presidential contenders. The Biden campaign declined to comment on the criticism being leveled at Bass. But Bass's team pushed back on what it described as an effort to create a misleading portrait of her career and personal politics.

"Congresswoman Bass learned to handle pressure working in an emergency room holding people's lives in her very hands -- she's not concerned about a few articles intended to distort her proven record of service and leadership and she knows why they're coming in now," a spokesperson said.

Through decades in government, first in California and then on Capitol Hill, she has consistently worked alongside her ideological opposites to strike deals, like the package that pulled her home state out of a budget crisis in 2009, that included significant trade-offs -- hardly the stuff of a serial résumé builder.

Still, progressive leaders, never shy of critically revisiting past compromises, have suggested that selecting Bass could be a mover with the party's left, which remains skeptical, if broadly supportive, of Biden's campaign. Moderate Democrats and party operatives framed it differently, if no less ebulliently, touting Bass as a low-key, steely but pragmatic politician with the chops and credentials required for the vice presidency.

By the end of July, a consensus began to emerge: Bass had done the work and made more friends than enemies along the way. A chance meeting with Biden, as her camp described it, during his visit to Washington, DC, to honor the late Civil Rights hero and Georgia Rep. John Lewis last week, further amped up the speculation.

Before stories about Bass's two controversial sets of remarks -- one at the opening of a Scientology church, another to memorialize a left-wing activist who held a leadership position with the Communist Party USA -- were published, CNN's Jeff Zeleny and MJ Lee reported that the five-term congresswoman was among the top contenders being considered by Biden's team, along with California Sen. Kamala Harris and former Obama administration national security adviser Susan Rice. The top tier names, though, seem to be in constant flux, with Michigan Gov. Gretchen Whitmer again emerging as contender in the last few days.

"Everybody likes Karen Bass. People are scratching their heads, saying, who is this woman?," Steve Westly, a former California state controller and major Biden fundraiser, told CNN last week. "When you've been speaker of the legislature for a state that's twice the population of New York and the world's fifth biggest economy, you know how to manage media, you understand the economy. I think she is stronger than people think."

But his analysis has been tested over the past week as Bass has come under the microscope.

On Tuesday, the Los Angeles Times, citing a decade-old financial disclosure form, reported that Bass got a considerable boost to her income in 2010 by collecting consulting fees from a nonprofit that she founded, in 1990, before entering government. The group, called Community Coalition, had previously received donations from her state assembly campaign committee.

Bass denied any suggestion of wrongdoing and told the paper that her consulting income, though paid by the Community Coalition, had been tied to outside grants and not contributions from her own campaign coffers.

The report capped off a challenging week for Bass, who after effectively entering the vice-presidential race's waters, and enjoying a nice early swim, quickly found herself caught in a riptide of stories tracing back to her time as a teen activist.

Bass got a taste of the scrutiny to come back in June, when her comments referring to the late Cuban dictator Fidel Castro, upon news of his death, as "Comandante en jefe" were rehashed in a Politico story. The term, akin to "commander-in-chief," might have been accurate, but when it comes to Florida's Cuban community, especially its older members, kind words for Castro are a no-go.

She apologized for using the phrase and, in an interview on MSNBC, claimed her intentions had been lost in translation.

"I have talked to my colleagues in the House about that, and it's certainly something that I would not say again," Bass said. "I have always supported the Cuban people, and the relationship that Barack Obama and Biden had in their administration in terms of opening up relations."

During the presidential primary, Sen. Bernie Sanders' campaign sought to deflect criticism over the candidate's rosy past statements about Castro's Cuba with a similar point: that, in practice, his contemporary positions on the US and Cuba were no different from that of Obama and Biden, who had sought to re-open diplomatic and trade relations with the communist state 90 miles south of Florida.

That particular storyline mostly faded, but it was a signal of things to come.

The Trump campaign has rushed to smother any nuance, calling Bass "Communist Karen" -- part of a broader effort by Trump's team to paint Biden as a cat's paw for the left -- in a press release that aggregated a series of stories detailing Bass's past travel to Cuba, including her first time there, in 1973, with the Venceremos Brigade, a creation of Students for a Democratic Society, one of the leading left-wing, anti-war groups of the era.

"We built houses during the day and then we had what they called cultural activities and we called parties," Bass said of the trip in an interview with The Atlantic. Describing herself at the time as naïve but not unaware of the Castro government's authoritarianism, she added: "I came home and was protesting everything; I knew that the Cuban people didn't have the ability to do that."

The Atlantic reported that Bass visited the country on eight occasions in the 1970s and returned a handful of times before and after entering Congress in 2011, including trips in 2015 and 2016, when she went as part of formal US delegations.

The hits kept coming as the week slogged on. Politico was the first to report on her eulogy for the Louisiana-born leftist leader Oneil Cannon, who died at 99 years old, on the morning of Trump's inauguration in 2017. Cannon, known to Bass as a labor activist and anti-racism advocate in Los Angeles, had also been a member of the Communist Party USA, a fringe organization most Americans would have only encountered if they had been confronted by a pamphleteer.

A spokesman for Bass downplayed her connection to Cannon, and denied any suggestion that they were always ideologically aligned. Cannon's politics shifted over the years. Later on in his life, he campaigned for former President Barack Obama.

A few days before her remarks about Cannon, Bass was made to answer for another speech, dug up by the Daily Caller, this one in at a 2010 ribbon-cutting for a Scientology church, when she was speaker of the California State Assembly. In her talk, Bass praised the organization and its founder, L. Ron Hubbard, for its dedication to "equal rights."

Bass argued that accusations of abuse against the church were not yet widely known or investigated a decade ago, though its practices had been questioned for years and famous former members were beginning to speak out.

"Everyone is now aware of the allegations against Scientology," Bass said in a statement last Sunday."Back in 2010, I attended the event knowing I was going to address a group of people with beliefs very different from my own, and spoke briefly about things I think most of us agree with, and on those things -- respect for different views, equality, and fighting oppression -- my views have not changed."

But four days later, she amended her explanation, which initially claimed that the church was in her district. It was not. But she was consistent on another point.

"Just so you all know," Bass said, "I proudly worship at First New Christian Fellowship Baptist Church in South LA."

CORRECTION: This story has been corrected to reflect that the Daily Caller first reported on Karen Bass's speech for a Scientology church.