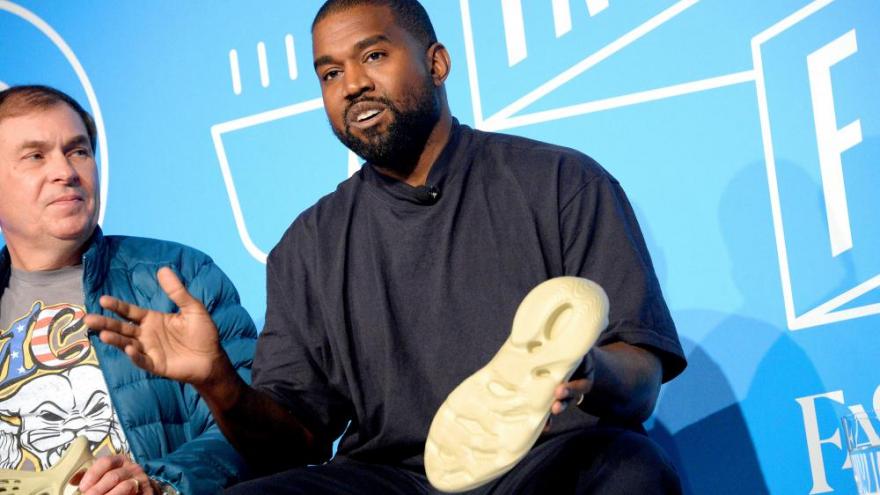 Kanye West is on the ballot in Minnesota and Tennessee but just missed the filing deadline in Wisconsin. Missouri said his petition lacked more than 3,400 valid signatures, but he's gone to court in a last-ditch attempt to get on the ballot in the swing state of Ohio.

(CNN) -- Kanye West is on the ballot in Minnesota and Tennessee but just missed the filing deadline in Wisconsin. Missouri said his petition lacked more than 3,400 valid signatures, but he's gone to court in a last-ditch attempt to get on the ballot in the swing state of Ohio.

He's also blown past the first deadline to tell federal regulators how he's using campaign money and has only hit the campaign trail for a rally once. But in Arizona, one of the last remaining presidential battlegrounds where he could still qualify for the ballot, the West campaign is gathering signatures.

A little more than two months before Election Day, rapper-producer West's attention-grabbing presidential bid is bumping along in fits and starts -- dogged by repeated questions about the campaign's tactics, the candidate's mental health and whether his quasi-candidacy represents little more than an underhanded effort by Republican operatives to capitalize on West's celebrity in an attempt to siphon Black support from Democratic nominee Joe Biden.

The 43-year-old music and fashion mogul and his running mate, Wyoming-based spiritual life coach Michelle Tidball, have no chance of winning the White House. A CNN tally shows he had made it onto the ballot in just 11 states as of Monday -- where a total of 83 electoral votes are at stake, well short of the 270 needed for presidency.

But he has persisted in his quest to mount an independent bid -- aided at every turn by Republican figures, some with close ties to President Donald Trump.

In Ohio, Curt Hartman, the Cincinnati lawyer representing West in the lawsuit the campaign filed this week to get on the Ohio ballot, served as a delegate to the 2016 Republican National Convention and is the Republican nominee for a county judicial seat. Hartman did not respond to messages.

Ohio Secretary of State Frank LaRose has concluded that West's nominating petition and statement of candidacy did not match the petitions that were signed by voters.

His campaign also is suing in Wisconsin, where state election officials concluded West missed the filing deadline. His lawyer in the Wisconsin case, Erick Kaardal, is a former secretary/treasurer of the state Republican Party in neighboring Minnesota.

Asked how he came to represent the West campaign, Kaardal said: "I've been instructed not to comment."

Even as some state officials rebuff West's efforts to get on the November ballot, West's campaign continues to push for ballot access in other states.

In Arizona, a presidential battleground where candidates face a September 4 deadline to qualify for the ballot, a signature collector with the West campaign approached students this week on the campus of Arizona State University. In an interview with CNN, a student described one worker as evasive when asked about the candidate's identity.

The West campaign did not response to interview requests this week

Trump campaign aides have denied any effort to coordinate with West, who fervently supported Trump before announcing his own bid in in July.

"I like Kanye very much," Trump told reporters earlier this month, but added: "No, I have nothing to do with him getting on the ballot. We'll have to see what happens."

West has either missed the deadline, did not file or has had his application denied in 33 states and Washington, DC.

He still has the chance to qualify in six others, including Arizona, where recent polls show Biden and Trump locked in a close race.

Arizona State law student Matt Rein told CNN he was approached earlier this week by a signature gatherer as he walked to class in Phoenix.

Rein said when he asked what the signature was for, the man said only that it would help get an independent candidate on the ballot in Arizona.

After a several follow-up questions from Rein, who is the founder of The Dem Hype House, a hub for liberal discourse on TikTok, Rein said the worker first described the petition as helping Tidball before finally acknowledging Tidball was on the ticket with West.

Rein said he declined to sign and walked away, but the canvasser pursued him, saying that although West was unlikely to prevail, his presence on the ballot could help take away the "reality star vote" from Trump.

"He really buried the lead with the whole Kanye thing," Rein told CNN. "It wasn't until I pressed him multiple times, at which point he said it was for Kanye West."

"At the minimum, it's very shady."

Rein said several his classmates were also approached to sign petitions this week.

Despite the sales pitch by the signature-gatherer in Arizona, most activists on the Democratic side and outside observers doubt West could end up having much of an effect on the race even in the states where his name does end up appearing on the ballot.

An Ipsos/Reuters poll conducted earlier this month showed only 2% of registered voters chose West as their preferred candidate when given the option.

Matt Liebman, president of the Voter Protection Project, a Democratic group, told CNN his organization expects to spend more than $5 million this year on efforts to elect voting rights champions and boost voter turnout in November. The West campaign effort, he said, was likely to fall flat -- whatever its true aims.

"Honestly, Black voters across the country, they're not going to be fooled by this," Liebman said.

Liebman suggested that, as voters read and heard more about the controversies surrounding West and allegations of GOP shenanigans, the result could be a net-positive for the Biden campaign.

"I think the Kanye West thing could actually be helpful in the sense that it's bringing more attention to the race and folks are like, 'This is just another crazy tactic,' " Liebman said. "It's just another distraction. It's more chaos and I think people are tired, they're tired of the chaos."

For some Democrats, there are still raw memories of 2016, when they beat Trump in the popular vote but lost the presidency, and 2000, when Ralph Nader ran an independent campaign that many Democrats blamed for undercutting support for former Vice President Al Gore. They fear West's name on the ballot in a swing state could, if the margins are as tight as expected, attract just enough support to tilt the race.

But the political climate in 2020 is very different, noted Robert Shapiro, a professor and former chair of the Department of Political Science at Columbia University, who said that West's campaign is unlikely to attract the disillusioned voters who were drawn to third party candidates four years ago.

"The people who were angry and frustrated and so forth are basically, at the moment, kind of wrapped up more in being either anti-Trump or anti-Democrat," Shapiro said. "And the anti-Democrat people will vote for Trump and the anti-Trump people will vote for the Democrats, because their anger is (directed) that way and not to some general anger, where you say, the hell with it for both parties."

Shapiro also pointed to West's scattershot political operation and noted that, with a few exceptions, he has not campaigned or engaged with voters -- unlike the more sophisticated and ideologically driven efforts undertaken by Jill Stein, the Green Party nominee, and Gary Johnson, the Libertarian candidate, in 2016.

"Stein and Johnson, they did the legwork, they put in the time and their supporters put in the time to do what it did. They developed organizations," Shapiro said. "West didn't do that."

Criticism of Republican efforts to elevate West's candidacy have also focused on the artist's mental health. West has said he's been diagnosed with bipolar disorder. In a post on Instagram Stories last month, days after West spoke at a campaign event -- a rally in South Carolina -- his wife, Kim Kardashian West, addressed some of those concerns -- and her own.

"(Kanye) is a brilliant but complicated person who on top of the pressures of being an artist and a black man, who experienced the painful loss of his mother, and has to deal with the pressure and isolation that is heightened by his bi-polar disorder," she wrote. "Those who are close with Kanye know his heart and understand his words some times do not align with his intentions."

West's campaign did not join other presidential contenders who filed campaign reports on August 20 with the Federal Election Commission -- indicating what his campaign had raised and spent in July.

Under federal law, presidential candidates must file monthly reports in an election year if they have raised or spent $100,000 -- or anticipate doing so during the course of the year, said Paul Ryan, an election law expert who oversees policy and litigation at Common Cause.

And West appears to have been spending heavily early on.

On July 15 -- the same day he filed paperwork announcing his candidacy with the Federal Election Commission -- West paid a $35,000 filing fee to get on the ballot in Oklahoma, according to the Misha Mohr, the spokeswoman for the Oklahoma State Election Board.

The Federal Election Commission currently lacks a quorum to pursue any enforcement actions. And Ryan said it's difficult to prove what a campaign anticipated spending, although the agency could subpoena records to determine whether West already had plans to exceed the $100,000-threshold by signing contracts in July for future work, such as petition-gathering.

The bigger legal jeopardy might be for the Trump campaign if evidence ever emerged that they operated in concert with West to benefit the President's reelection, Ryan said.

On Friday, Trump campaign spokesman Tim Murtaugh responded: "We have no idea what Kanye West is doing or who is helping him do it."