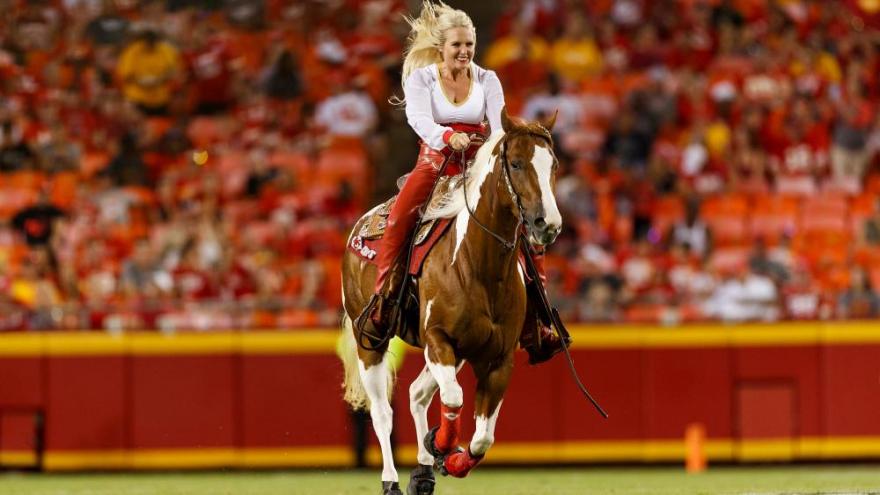 In this 2019 photo, Chiefs mascot Warpaint gallops around the field after the team scored a touchdown during a preseason game. The Chiefs won't be changing the team's nickname anytime soon, but are retiring their horse mascot named "Warpaint," according to Mark Donovan.

His comments came after MLB's Cleveland Indians announced Friday they would become the Cleveland Guardians next year.

The Indians will join the NFL's Washington Football Team, formerly the Washington Redskins, in moving on in recent years from a name evoking Native Americans.

But the Chiefs, like the MLB's Atlanta Braves, don't plan a name change.

"We have a really good American Indian working group that provides us real guidance and feedback and perspective on this issue," Donovan said Monday at a news conference.

"We're going to continue to create opportunities to educate, create awareness and work exactly as we have over the past eight years now with the working group," he said.

One difference fans will notice at Arrowhead Stadium next season is the absence of Kansas City's horse mascot Warpaint.

"A lot of reasons for that, but we just feel like it's the right thing to do," Donovan said.

Since 2009, the sorrel tobiano mare has been a fixture at Chiefs home games.

The Warpaint tradition was reintroduced as part of the team's 50th anniversary season after a 20-year hiatus. In earlier iterations, Warpaint had been mounted by a rider dressed in traditional Native American headdress and garb.

In August 2020, the Chiefs banned fans from wearing ceremonial headdresses and Native American-style face paint in the team's stadium.

The team still allows fans to do a cheer called the tomahawk chop. There is also a pregame tradition of beating a drum.

Before becoming mayor, Bartle was actively involved in leadership of the Boy Scouts of America. In 1925, he created the Tribe of Mic-O-Say, a scouting organization that drew on Native American heritage and customs.

Bartle was not a Native American, but claimed he was "inducted into a local tribute of the Arapaho people," according to Mohawk journalist Vincent Schilling. Bartle was called "Lone Bear," and later came to be colloquially known as "Chief."