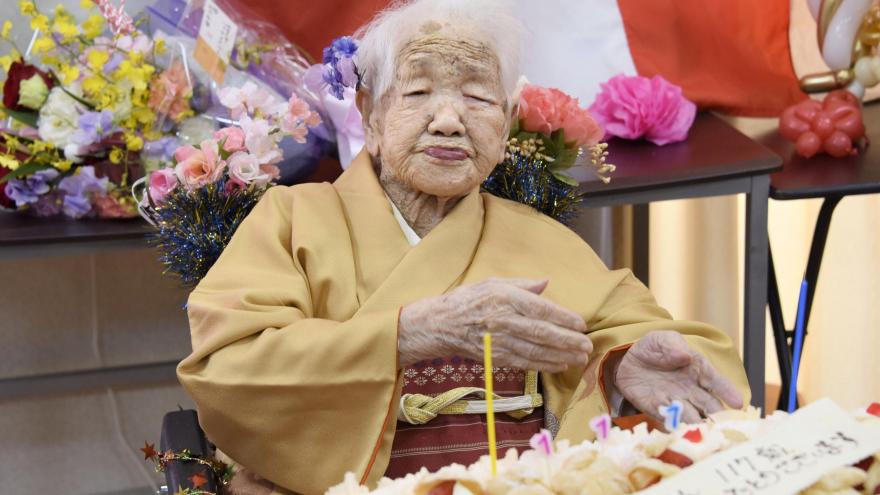 "Great achievement. (Kane Tanaka) reached 119 years of age," Junko tweeted, with a photograph of her great-grandmother, whom she saw in December. "I hope you'll continue to live life cheerfully and to the fullest."

Junko shared a photo on Twitter of two commemorative Coca-Cola bottles that Tanaka was given for her birthday, the labels personalized with her name and age.

Junko spoke to CNN in March 2021, when her great-grandmother was preparing to carry the Olympic torch ahead of the postponed Tokyo 2020 Summer Olympics. She started the Twitter account in January 2020 to commemorate Tanaka's life.

"I might be biased because I'm related to her but I think it's kind of amazing -- I wanted to share that with the world and for people to feel inspired and to feel her joy," Junko said.

Tanaka has lived through a multitude of historical events, surviving two world wars and the 1918 Spanish flu. Her life has spanned 49 Summer and Winter Olympic Games.

"I don't remember her talking much about the past ... She's very forward thinking -- she really enjoys living in the present," Tanaka's grandson, Eiji Tanaka, told CNN last year.

Tanaka is living in a nursing home in Fukuoka prefecture. Her family said keeps her mind and body engaged by doing math, and remaining curious.

The Guinness Book of World Records recognized her as the world's oldest living person in 2019.

In September 2021, Spain's Saturnino de la Fuente García became the oldest living man at 112 years old. He was born in 1909, and endured the Spanish Civil War, working as a shoemaker.

He said the secret to a long life is, "A quiet life... and do not hurt anyone," according to a press release from Guinness World Records.

Tanaka received congratulatory messages from Twitter users on her birthday.

"It's awesome that at 119 years old she can look straight at the camera and make a peace sign," said Twitter user @TuNatoron.