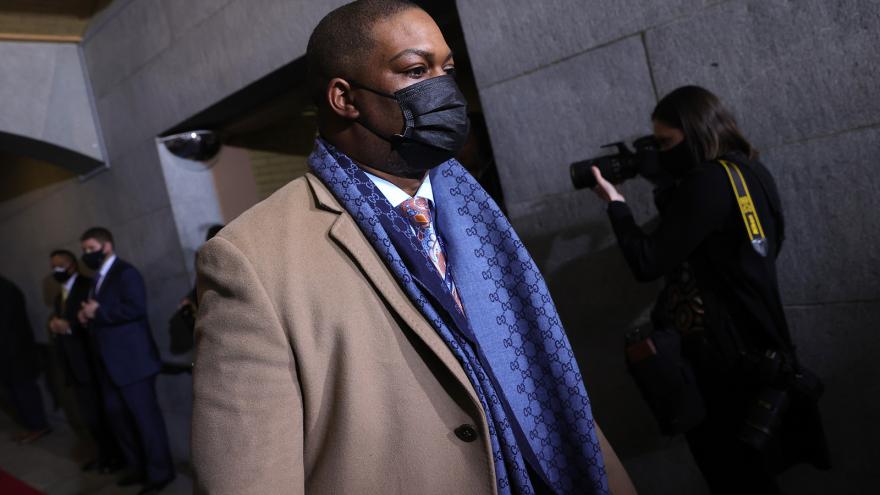 US Capitol Police Officer Eugene Goodman arrives at the presidential inauguration of Joe Biden on January 20. He escorted Kamala Harris to the event.

(CNN) -- Eugene Goodman has been hailed as a hero ever since he lured rioters away from the Senate chambers during the January 6 insurrection on Capitol Hill.

The Capitol Police officer's courageous actions were recognized again on Wednesday when he escorted Kamala Harris to the inauguration ceremony. He was there in his new role as acting deputy Senate sergeant at arms.

Goodman became the face of resistance to the insurrection when shortly after the Capitol Hill attack, video showed him leading a mob of Trump supporters in the opposite direction of the Senate chambers. At the time, lawmakers were debating an objection to Arizona's Electoral College vote count.

In footage captured by Huffington Post reporter Igor Bobic, Goodman is seen being chased up a Capitol staircase by the mob. When he reached a landing, he looked to his left, where he noticed the door to the Senate chambers was still unguarded. He led the rioters to the right, away from lawmakers and toward backup officers.

The Senate chambers wouldn't be secured until one minute later, according to CNN's timeline of events from the riot. Once Goodman led the rioters into a larger hall, backup officers arrived, though they were still outnumbered by rioters.

A bipartisan trio of lawmakers introduced legislation last week to award Goodman with a Congressional Gold Medal for potentially saving lives on one of the darkest days in US history.

The medal is reserved for Americans who've made "distinguished achievements and contributions" to their country.

CORRECTION: An earlier version of this piece got Goodman's role wrong. He is the acting deputy Senate sergeant at arms.