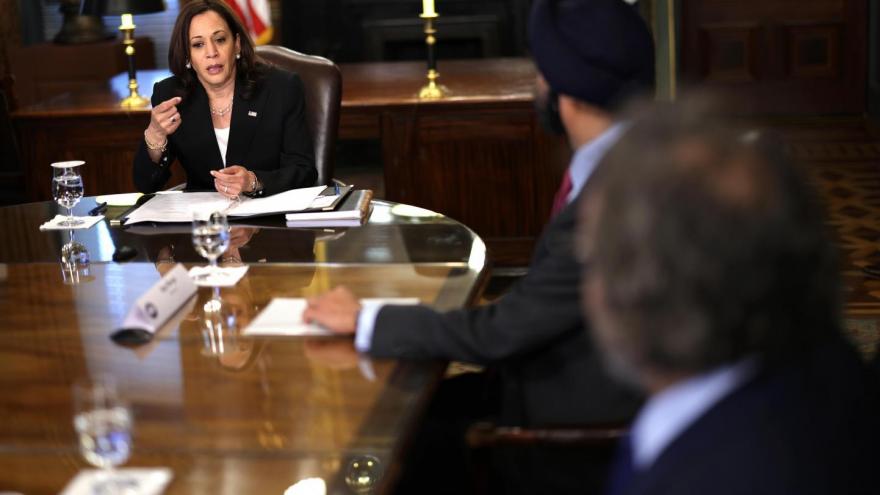 The new role comes as the Biden administration condemns efforts by Republican-led state legislatures to pass restrictive laws the White House says make it harder for Americans to vote. Calling the state bills an "unprecedented assault on our democracy," Biden recognized that he was handing Harris a tough job.

"I'm asking Vice President Harris to help these efforts, to lead them among her many other responsibilities. With her leadership and your support, we're going to overcome again -- I promise you. It's going to take a hell of a lot of work," Biden said.

In a statement of her own released first to CNN, Harris said she will take her case to the American people to press the issue.

"In the days and weeks ahead, I will engage the American people, and I will work with voting rights organizations, community organizations, and the private sector to help strengthen and uplift efforts on voting rights nationwide," Harris said in the statement. "And we will also work with members of Congress to help advance these bills."

"The work ahead of us is to make voting accessible to all American voters, and to make sure every vote is counted through a free, fair, and transparent process. This is the work of democracy," Harris added.

Earlier Tuesday, deputy White House press secretary Karine Jean-Pierre told reporters aboard Air Force One the latest state bill, Senate Bill 7, passed by Texas Republicans, "part of a concerted attack on our democracy being advanced in state houses across the country on the basis of the same repeatedly disproven lies that led to the assault on our nation's Capitol on January 6." Texas Democrats derailed the restrictive voting bill, but are warning of the continued threat of the legislation that Texas Gov. Greg Abbott, a Republican, has promised to bring back during a planned special session.

In a statement released Saturday, Biden criticized the bill as an "assault on democracy" and "wrong and un-American." In her own statement on Twitter, Harris used similar language, adding: "We need to make it easier for eligible voters to vote. Not harder."

Both the President and vice president have been vocal about voting rights, calling for Congress to pass HR 1, called the For the People Act, and the John Lewis Voting Rights Advancement Act.

The path through Congress for either of those pieces of legislation is shaky, and Biden took a jab at two members of his own party during his Tulsa speech as he discussed the slow pace of lawmaking.

"I hear all the folks on TV saying, 'Why doesn't Biden get this done?' Oh, because Biden only has a majority of effectively four votes in the House and a tie in the Senate, with two members of the Senate who vote more with my Republican friends," he said. "But we're not giving up."

The President did not name the senators, but was presumably referring to West Virginia Sen. Joe Manchin and Arizona Sen. Kyrsten Sinema, who actually vote more with Democrats than Republicans but aren't always aligned with the Democratic caucus on some of the key parts of Biden's agenda. Manchin is opposed to the "For the People Act," the Democratic-backed voting rights bill that is expected for a vote in the Senate in June. It is not expected to pass.

In May, Harris held a meeting with voting and civil rights leaders to discuss "the critical importance of protecting the right to vote," per a statement released at the time.

This becomes the latest task of Harris' expanding portfolio. In March, Biden tasked her with leading the diplomatic efforts in the Northern Triangle, to stem the flow of migration across the US- Mexico border. Since then, she's added leading the administration's efforts to expand broadband internet, a focus on small business among other issues.