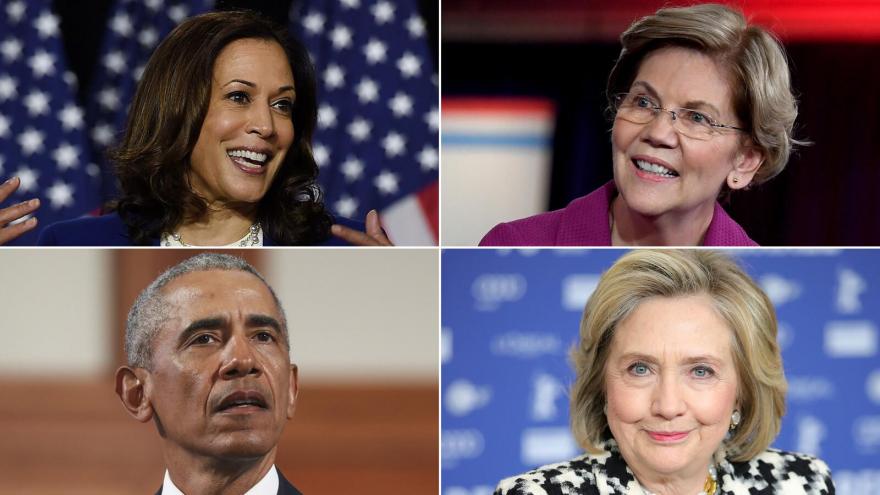 Kamala Harris will take her turn in the spotlight on Wednesday at the Democratic National Convention.

(CNN) -- California Sen. Kamala Harris made history Wednesday night as the first Black and South Asian woman to accept a major party's vice presidential nomination, promising to be a champion for the voiceless and forgotten Americans who are struggling in the midst of a pandemic and an economic crisis.

She introduced herself as the daughter of Indian and Jamaican immigrants who would strive to restore the principles of inclusivity after four years of divisiveness under Trump, citing the example of her mother who she said taught her daughters to "be conscious and compassionate about the struggles of all people" and to believe that "the fight for justice is a shared responsibility." Harris noted that was why she became a prosecutor who tried to reform the criminal justice system from within.

Harris said she and former Vice President Joe Biden share "a vision of our nation as a beloved community -- where all are welcome, no matter what we look like, where we come from, or who we love."

Though Americans may not "agree on every detail," they are "united by the fundamental belief that every human being is of infinite worth, deserving of compassion, dignity and respect," she said.

Harris has often argued that President Donald Trump's tactics have torn the nation apart as he forced the separation of families at the border, vilified immigrants, excoriated his political opponents and urged government officials to "dominate" peaceful demonstrators in the streets after the death of George Floyd at the hands of a Minneapolis police officer.

"There is no vaccine for racism. We've got to do the work," Harris said. "For George Floyd. For Breonna Taylor. For the lives of too many others to name -- for our children, for all of us."

"We've got to do the work to fulfill that promise of equal justice under law. Because, none of us are free until all of us are free," she said.

Earlier, Harris made a surprise appearance during the convention's cold open to stoke excitement about the night's program and to urge Democrats to fight through adversity to cast their votes.

For the last three-and-a-half years, former President Barack Obama largely receded into the background while Trump sowed chaos, punished his political opponents and nurtured his grievances as the nation plunged into a pandemic and an economic collapse.

But on Wednesday, Obama stepped into the role that Democratic activists have been yearning for him to take, speaking to Americans as "plainly" as he could about the stakes if Trump is reelected. Serving as a character witness for Joe Biden, he excoriated Trump for showing "no interest in finding common ground; no interest in using the awesome power of his office to help anyone but himself and his friends; no interest in treating the presidency as anything but one more reality show that he can use to get the attention he craves."

"Donald Trump hasn't grown into the job because he can't, and the consequences of that failure are severe," Obama said. "170,000 Americans dead. Millions of jobs gone while those at the top take in more than ever. Our worst impulses unleashed, our proud reputation around the world badly diminished and our democratic institutions threatened like never before."

Obama made the case for his former vice president in what was a sharp rebuke of Trump's handling of the coronavirus pandemic and the presidency in general. It also served as a symbolic moment cooked up by the former President himself.

Initially, the convention had Obama scheduled to speak after whoever was to be Biden's running mate. But once Harris was selected, Obama suggested switching the order so he could speak first, followed by her.

"It felt like an opportunity to symbolically pass the torch, give her her moment and spotlight," a person close to Obama said.

The 44th President's speech was one of the most confrontational and blistering statements he has made about his successor.

The former President argued that Trump has shown no interest in "finding common ground," or "using the awesome power of his office to help anyone but himself and his friends."

In a preemptive strike against Obama during his White House briefing Wednesday evening, Trump called his predecessor "ineffective" and "terrible."

Serving as a character witness for Biden, Obama spoke of his former vice president as a brother even though they come from different generations and different backgrounds. He spoke of Biden as a proud and devoted father who showed great resilience after the death of his first wife and baby daughter in 1972 and his son Beau Biden in 2015 -- and now helps other grieving families rebuild their lives.

"For eight years, Joe was the last one in the room whenever I faced a big decision. He made me a better president -- and he's got the character and the experience to make us a better country," Obama said. He asked voters to believe in "Joe and Kamala's ability to lead this country out of these dark times and build it back better."

"Joe and Kamala will restore our standing in the world -- and as we've learned from this pandemic, that matters," the former president said. "Joe knows the world, and the world knows him. He knows that our true strength comes from setting an example the world wants to follow -- a nation that stands with democracy, not dictators; a nation that can inspire and mobilize others to overcome threats like climate change, terrorism, poverty and disease."

Obama acknowledged that many voters have already made up their minds and spoke to voters who are questioning whether they should vote at all, outlining why he believes Biden will make a good president. Though the two men did not know one another well when Obama chose Biden as his running mate, he said that they became as close as brothers over the past 12 years.

"Joe and I came from different places and different generations. But what I quickly came to admire about him is his resilience, born of too much struggle; his empathy, born of too much grief," Obama said. "Joe's a man who learned early on to treat every person he meets with respect and dignity, living by the words his parents taught him: 'No one's better than you, but you're better than nobody.'"

Democrats highlight women across the party

A major theme of the night was the female leadership throughout the party, from the grassroots to the highest levels of power.

Trump has often sought to appeal to "the suburban housewife" in his tweets in the last few months, highlighting the importance of the female vote to his campaign. Democrats have been a bit more subtle, instead highlighting the influx of new female lawmakers in the 2018 midterm elections, the resilience of former Rep. Gabby Giffords and appealing to issues like gun control, climate change, female-owned small businesses and child care.

And on the night that Harris made history, the first woman to lead a presidential ticket and the most powerful female politician in US history touted the Biden-Harris ticket as the antidote for Trump's presidency.

Clinton insisted she meant it after the last election when she said Trump was owed an open mind and a chance to lead.

But the former Democratic nominee, speaking from her living room in Chappaqua, New York, said the President had shown himself unequal to a moment of national crisis and has indulged his ego, lacked humanity and had failed to govern.

"Remember back in 2016 when Trump asked: 'What do you have to lose?' Well, now we know: our health, our jobs, our loved ones. Our leadership in the world and, even, our post office," Clinton said, before calling for everyone to vote — a plea perhaps only she could make.

"Don't forget: Joe and Kamala can win 3 million more votes and still lose. Take it from me. We need numbers so overwhelming Trump can't sneak or steal his way to victory."

But she said those goals were only within reach with a change of leadership in the Senate and the White House.

"All of this is possible for America. Who is standing in the way? Mitch McConnell and Donald Trump," Pelosi said referring to the Senate majority leader.

Massachusetts Sen. Elizabeth Warren made child care the focus of her address, highlighting Biden's plan to make it more affordable to the average American family.

Pelosi contrasted that female leadership with her interactions with Trump, which have often been contentious and explosive -- culminating in Trump exploding in anger at the House speaker last fall and the veteran California Democrat walking out on the meeting, still the last time they have spoken.

"As speaker, I've seen firsthand Donald Trump's disrespect for facts, for working families and for women in particular -- disrespect written into his policies toward our health and our rights, not just his conduct," Pelosi said. "But we know what he doesn't: that when women succeed, America succeeds. And so we are unleashing the full power of women to take their rightful place in every part of our national life."

This story has been updated with additional developments on Wednesday