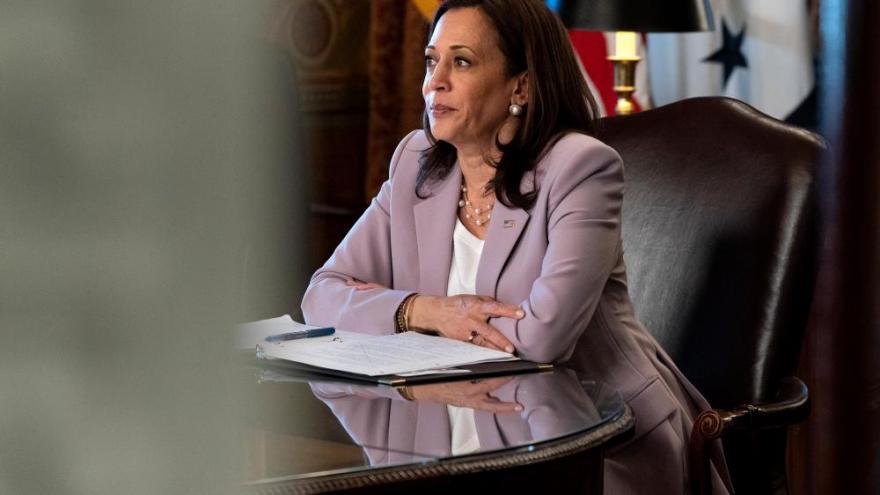 (CNN) -- Vice President Kamala Harris is making voting rights her top public focus, elevating a long-shot battle as she seeks to more clearly define her role and stake out high-value territory within the Biden administration.

A little more than six months into her time in office, Harris is also hiring new staff to replace those who announced their departures earlier this summer. One source says they're even considering additions to her communications team, citing heightened interest in her vice presidency, which at times has seen some missteps and intense scrutiny.

The vice president's carefully crafted push to put voting rights center stage in the past two weeks includes speeches, meetings with activists and local leaders across the country, and calls to lawmakers on Capitol Hill to find a way forward on the issue even as legislation remains at a standstill.

"It's given people something to really sort of focus on, that is so important to the country, and so foundational to what all of those in her office believe is critically important," said a source familiar with the dynamics in Harris' office, who contended that her team would have taken on the issue regardless. "It's a good way for them to sort of turn the page and really begin to potentially create some better dynamics within the office."

But the assignment also presents another political challenge for Harris as voting rights legislation currently has little hope of advancing on Capitol Hill. The question now is whether Harris can build confidence in her ability to lead one of the administration's top priorities, an issue that has no quick solution but could galvanize Democratic activists across the country ahead of the 2022 midterm campaign.

"The fact that we are continuing to have conversations, that the issue of voting rights is so present and prevalent in the media, is a direct result of the work that just the administration has been doing to elevate that issue," said Symone Sanders, Harris' chief spokesperson and senior adviser, told reporters this week.

The vice president's role as the administration's lead on voting rights was formalized in early June when President Joe Biden publicly tasked her with the assignment, one that officials say she asked for. But as she jumpstarted that process, other issues came into the spotlight.

Days after her assignment was announced, Harris made her first foreign trip to focus on another politically sensitive task -- her diplomatic work to stem the flow of migrants from the Northern Triangle. While traveling in Guatemala, Harris fumbled through an answer about traveling to the US-Mexico border, a moment that left some White House officials perplexed over her response to a predictable question.

Just a few weeks later, the dynamics in Harris' office were put under the microscope as anonymous allegations of dysfunction and tension spilled into public view. The White House jumped into damage control mode to defend the vice president and her chief of staff, Tina Flournoy, in an attempt to keep a drama-filled narrative from taking hold.

But Harris is now pushing ahead and has been engaged in a weeks-long push to put the fight to protect voting rights front and center with a senior administration official calling it a "front burner issue" at a time when Republicans across the country seek to enact restrictive voting laws. As of July 14, 18 states have enacted 30 laws that restrict voting access in some capacity, according to the Brennan Center for Justice at NYU Law.

The vice president has approached voting rights similarly to how she tackled diplomacy with the Northern Triangle nations after receiving that assignment: Talking to as many people as she can as often as possible.

On Wednesday, Harris held a listening session with poll workers and election officials at the White House, lauding them for "upholding some of the most important tenets of our democracy." Officials said the meeting gave the vice president a chance to hear the challenges the workers have faced and express solidarity with a group that experienced some threats in the wake of the 2020 election, many of which Harris said came from people who were "unhappy with the outcome of the election."

When Texas Democrats fled the state to block Republican changes to voting laws, Harris was the one dispatched to express the administration's support, though later multiple lawmakers that met with Harris tested positive for Covid-19. Her office said on Saturday she was "not at risk of exposure" and it was later reported she tested negative.

"I specifically asked her, you know, should we even be here right now? Are we making a difference? And you know, it was an emphatic, 'Yes,'" said Texas state Rep. Trey Martinez Fischer, who was among the Texas Democrats to meet with Harris in the nation's capital.

And last week, the vice president traveled to Michigan to meet with state and local officials, following past trips to states like Georgia and South Carolina to hear from officials on the ground about efforts to protect the right to vote.

She has also hosted disability advocates at the White House and convened a group of Black female leaders to discuss voting rights in the Roosevelt Room with Cedric Richmond, the director of the White House's Office of Public Engagement, and other administration officials.

Harris has also spoken about the issue with German Chancellor Angela Merkel during a visit at the Naval Observatory last week and has done a high-profile event with the Democratic National Committee, unveiling new voting-focused investments.

The full-court press reflects the public and private emphasis Harris is taking on with this issue with a senior administration official describing it as a nearly "24/7" focus on the issue.

"I think what was conveyed in the meeting is that she absolutely understands the gravity of the moment. I think that she understands the fight, what we're up against. And why this is an urgent moment, I do," said Latosha Brown, co-founder of Black Voters Matter, who participated in the Black women leaders voting meeting. "But we also recognize that she's the vice president, that the administrative priorities are not set by her. That's just the truth."

The power to convene

Harris' office says the initial strategy revealed in June of building coalitions of Americans concerned about the right to vote, educating Americans on the perils of state legislatures passing more restrictive voting laws and collaborating with Congress is still ongoing -- despite the path to legislative success narrowing.

In public, Harris has leaned heavily on that "building coalitions" aspect of the strategy, another move used in her diplomatic efforts.

"The convening power is important because part of convening is the way that you raise the awareness among Americans who may not be aware what is happening and bringing groups together so we can have a unified strategy as well as a whole of government strategy," said Karen Finney, a Democratic strategist and CNN commentator who participated in the meeting with Black women leaders.

Those in that meeting said Harris detailed what her office was currently doing to further protect voting rights, but also solicited suggestions from the women present on what more they believed her office should do to "help elevate and keep this issue in the forefront."

One suggestion, a source told CNN, that Harris seemed particularly interested in was a "whole-of-government" approach that would require every federal agency to create an task-force that would focus on how voting rights and restrictive new laws passed impacted their agency, similar to the inter-agency approach former President Barack Obama set-up for the Affordable Care Act and former President Bill Clinton created for "Y2K."

Harris played a similar role in her meeting with Texas state House Democrats last week, receiving an update from the lawmakers about their efforts in Washington and on the state level and stressing the administration won't back down from the voting rights fight.

"I know that she gets it at a personal level, like a lot of us do, who for whom our communities are Latino, Black communities feel attacked with voter suppression legislation or anti voter legislation. So I think she's a critical player in this," said Texas state Rep. Gina Hinojosa.

Her recent push has coincided with the anniversary of John Lewis' passing, which the vice president used to issue a symbolic call to action to pass voting rights legislation even as Republicans have shown little appetite towards moving those bills forward.

Harris' congressional outreach has included conversations with Republican lawmakers, a White House official said, though her team has declined to provide names. In an interview with CBS this week, Harris said she spoke about voting rights with Republican Sen. Lisa Murkowksi of Alaska about voting rights, but an aide later clarified the two women had discussed infrastructure. A spokesperson for Murkowski also said their recent conversations have focused on infrastructure.

Last month, Harris presided over the upper chamber when Senate Republicans blocked a vote to open debate on the "For The People Act," a key Democrat-led voting and elections bill. Since that vote, the vice president has remained engaged with lawmakers to find other ways forward, officials said, though she and the White House have not gone as far as embracing calls from civil rights leaders, activists and progressives to gut the filibuster, arguing it is a decision left up to the Senate.

In a CNN town hall Wednesday, Biden condemned efforts to curb voting rights on the state level, calling the Republican attempts, "Jim Crow on steroids." But the President did not budge on his position on the filibuster, warning its unraveling would "throw the entire Congress into chaos."

The filibuster topic was broached near the end of Harris' meeting with Black women at the White House on Friday, one source said, adding the vice president did not weigh in on the future of the rule. The source said when the matter was raised, a group of White House counsel aides who attended stood up and left, causing one attendee to say, "Well, there go the lawyers!"

A senior administration official later told CNN the lawyers' departure was coincidental and not tied to the discussion of the filibuster.

Richmond told the attendees that a host of Senate Democrats don't want to end the filibuster, and the White House would continue to work the phones to find a solution in addition to other efforts.

Allies of Harris, who have been critical of the White House's resistance to call for more drastic changes to the filibuster, say change can't be made without Biden or the White House at large putting their full weight behind the effort.

"(Biden) has not sent the message yet, that I am willing to protect your right to vote at all costs," Brown told CNN.

Referencing Biden's pledges to sign voting rights bills, Brown added, "The fact of [Biden] signing is not the question. The question is: will he leverage his power to get in the position to get to his desk?"

Derrick Johnson, president and CEO of the NAACP, agreed both the vice president and President should leverage their relationships to push senators to act.

"This is not something that we're going to be able to organize ourselves out of. This is squarely the responsibility of the US senators to address. Her role as a former member of that body is to use all of her relationships and her knowledge to get us to a majority of the votes to protect the rights of voters," Johnson said.

He added, "That's the same thing for the President, that the two of them, we are asking in this moment, to use their relationship, their skill, their knowledge of the Senate to get a solution."