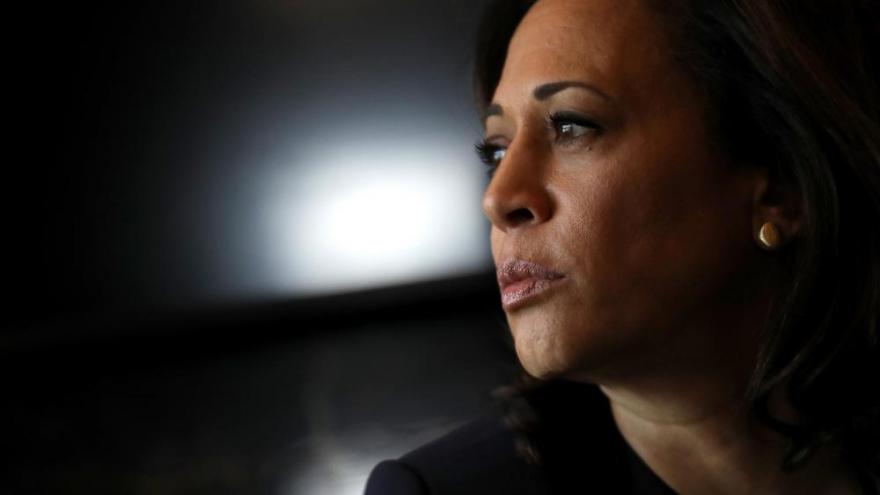 Sen. Kamala Harris is poised to withdraw her candidacy for the Democratic presidential nomination, two sources familiar with the decision tell CNN.

(CNN) -- Sen. Kamala Harris ended her 2020 presidential campaign on Tuesday, an abrupt departure for a candidate who was once seen as a leading contender for the Democratic nomination.

The California Democrat told her senior staff of the decision Tuesday morning, and later sent an email to supporters and released a video on Twitter.

"To you my supporters, my dear supporters, it is with deep regret -- but also with deep gratitude -- that I am suspending our campaign today," Harris said in the video.

"But I want to be clear with you: I am still very much in this fight," Harris continued. "And I will keep fighting every day for what this campaign has been about. Justice for the people. All the people."

Harris' exit from the race is a precipitous fall for a candidate who launched her campaign to high expectations. The senator has struggled for months to move her low poll numbers and said Tuesday that financial pressures led her to end her bid. The lack of support and money led to internal squabbling in the closing months of the campaign, campaign sources told CNN, all of which contributed to her inability to stay in the race.

"So here's the truth today. I've taken stock and looked at this from every angle, and over the last few days have come to one of the hardest decisions of my life," Harris said. "My campaign for president simply doesn't have the financial resources we need to continue."

"I'm not a billionaire. I can't fund my own campaign. And as the campaign has gone on, it's become harder and harder to raise the money we need to compete," Harris said.

Harris will travel to the early-voting states this week to personally and privately thank staff and supporters there for their hard work and dedication.

The move drew a snarky tweet from President Donald Trump, who said, "Too bad. We will miss you Kamala!"

Harris fired back: "Don't worry, Mr. President I'll see you at your trial."

Harris launched her campaign on Martin Luther King Jr. Day in January, a nod to how her candidacy and possible nomination would be a historic moment for the country and party. Harris now exiting the race means Democrats are losing the only black woman -- a key voting bloc to the party -- running in the 2020 primary.

Harris had struggled to gain traction in the race for months. The campaign, in a bid to resuscitate her presidential hopes, turned all of its attention to Iowa in the fall, pledging to keep Harris in the state as much as possible and telling reporters that anything less than a third-place finish in the state would be a loss.

An early sign that Harris' bid was facing challenges came in November when her campaign -- in an effort to further go all in on Iowa -- all but shuttered her organization in New Hampshire and redeployed staff in Nevada and California to Iowa.

The move was an about face for the senator, who had launched her campaign by touting her ability not only to compete in places like Iowa and New Hampshire, but also seize on her local and neighboring status in Nevada and California.

But Harris' departure this early before the Iowa caucuses was unexpected, especially considering she had already qualified for the December debate stage, something a number of candidates still in the race had yet to do.

One reason that could have led to Harris' sudden ending of her bid: The financial situation inside the campaign was more dire than widely known. For example, the campaign had only reserved less than $10,000 for a digital ad that it had touted with much fanfare earlier this week. Ultimately, the ad was never released online; the buy was canceled on Monday.

Harris began to take a hard look at the campaign's resources over the Thanksgiving holiday, two sources told CNN, and made the decision to get out because she realized the financial realities of this race made it clear that success in Iowa and later primary contests was not possible.

The senator made the final decision on Monday after discussing the path forward with her family and senior aides. She did a full audit of the campaign's finances before making an assessment over the weekend and Monday, the sources said.

The decision comes just weeks before the deadline for candidates to withdraw from the primary ballot in Harris' home state of California.

For some current and former aides who hold deep respect for the senator, dropping out at this juncture is a smart political move. One former aide said the timing gives Harris time to regroup and restructure her national political image around the upcoming impeachment hearings, which will likely come to the Senate in January.

A poor finish in her home state would have been an embarrassment that the adviser believed could have longer lasting political consequences.

"It's better than finishing fifth in California," said the ex-staffer.

There is a sense of relief among some Harris campaign staffers. The turmoil within the campaign has taken such a toll that some aides are eager to move on to other projects, one aide said.

Harris' withdrawal could have significant ramifications for the candidates still in the race. Her campaign was filled with a number of top Democratic operatives both nationally and in states like Iowa who will be highly sought after by competing operations, and donors that were tied to Harris -- many of whom come from wealthy circles in California -- may now feel more free to back other candidates.

In the Tuesday email to supporters, Harris said though she is no longer running for president, "I will do everything in my power to defeat Donald Trump and fight for the future of our country and the best of who we are."

The high point of Harris' campaign came during the first Democratic debate in June, when she confronted former Vice President Joe Biden on his past opposition to busing as a way to desegregate schools. The moment went viral, catapulting her in the polls and exposing a weakness in the vice president.

But the days after the moment, it was clear the confrontation did more harm than good, with Harris being accused of manufacturing a moment where there was little policy difference between the vice president and her.

Harris was on the decline since that moment, however, unable to sustain the momentum she had coming into the race.