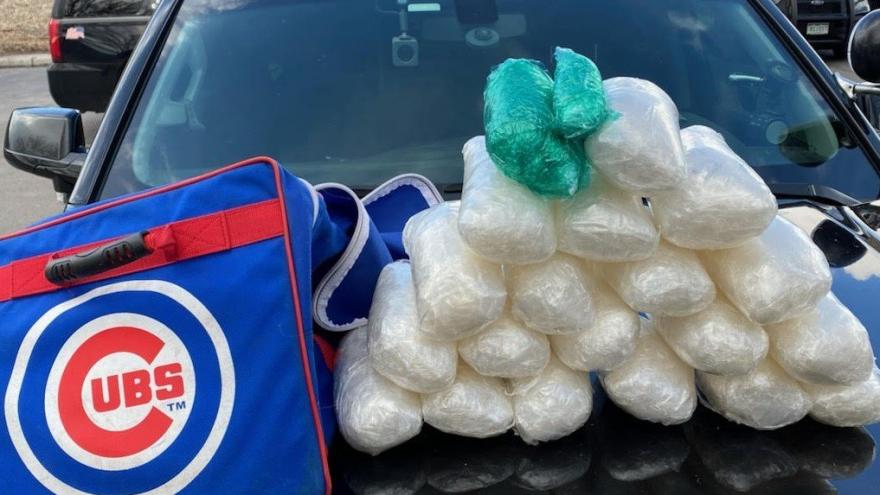 EAGLE, Colorado (KCNC) -- A minor league pitcher was caught transporting more than 20 pounds of suspected illegal narcotics Wednesday after ‘Zane,’ a K-9 with the Eagle County Sheriff’s Office, alerted on a hidden duffel bag during a traffic stop.

According to a press release received Friday from the Eagle County Sheriff’s Office, several of its deputies were working traffic patrol as part of the Gore Range Narcotics Interdiction Team’s enforcement. One of them pulled over a silver BMW that was seen speeding and drifting in and out of lanes.

This particular deputy, Evan Jaramillo, had Zane on board his patrol cruiser.

When the three people inside the vehicle gave consent to a search of it, Zane showed interest in a rear wheel and ultimately alert to an area under the rear seat, ECSO described.

“Deputies searched further and discovered a duffle bag belonging to the driver,” the press release stated. “Contents of the bag included several baseball gloves, cleats, and a bag doused in suspected essential oils with $1000 of neatly bundled cash, several neatly packaged bags of a white substance, and two green packages.”

Approximately 21 pounds of methamphetamine and just over a pound of oxycodone pills were seized. Final testing on the substances is in progress.

Per CBS Sports, Corrales was drafted by the Chicago Cubs in 2014 and is still a pitching prospect in the organization’s minor league system. The team stated it was aware of his arrest.

Corrales explained to Deputy Jaramillo that he was driving to Denver to teach a kids baseball clinic, according to police documents obtained by the Vail Daily. Corrales said an acquaintance from Sinaloa, Mexico, asked him to deliver duffel bag to Denver and he agreed.

Corrales admitted to knowing the duffel bag contained drugs but said he did not know what kind.