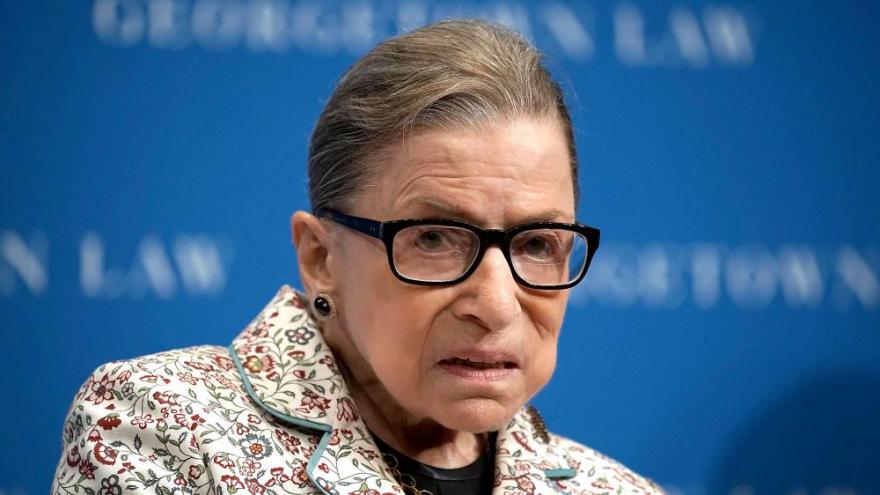 Justice Ruth Bader Ginsburg will lie in repose at the Supreme Court from Sept. 23-24 so that members of the public can pay their respects, the court announced on Monday.

(CNN) -- Justice Ruth Bader Ginsburg will become the first woman in history to lie in state in the US Capitol when her casket is placed in National Statuary Hall on Friday, according to congressional historians.

The historic event, which was announced by House Speaker Nancy Pelosi on Monday, will feature a formal ceremony for invited guests only because of the coronavirus pandemic.

Lying in state is a tribute reserved for the most distinguished government officials and military officers, while lying in honor is a distinction given to private citizens.

Earlier in the week, Ginsburg's body will lie in repose at the Supreme Court on Wednesday and Thursday so that members of the public can pay their respects, the court announced on Monday.

The casket will arrive in front of the Supreme Court just before 9:30 a.m. ET Wednesday and a private ceremony with family, close friends and the justices will take place in the Great Hall at the court. Following the ceremony, the casket will be moved under the portico at the top of the building's front steps.

Former law clerks will serve as honorary pallbearers, lining the steps as the casket arrives.

A private interment will be held next week at Arlington National Cemetery.

Ginsburg died Friday at the age of 87 due to complications of metastatic pancreatic cancer. She served on the court for more than 27 years and was nominated by then-President Bill Clinton in 1993.

A makeshift memorial adorned with flowers and candles paying tribute to Ginsburg lines the sidewalk outside of the Supreme Court. Lawmakers from both parties, entertainers, and athletes have also paid tributes to Ginsburg. Inside the Supreme Court, her bench chair and the bench in front of it have been draped in black in memoriam.

Ginsburg's death has reignited a debate over filling a Supreme Court vacancy during a President's last term of an election year, in which Republicans, including Senate Majority Leader Mitch McConnell, have united behind President Donald Trump's push to move forward ahead of the November election.

This story and its headline have been updated with historical context.