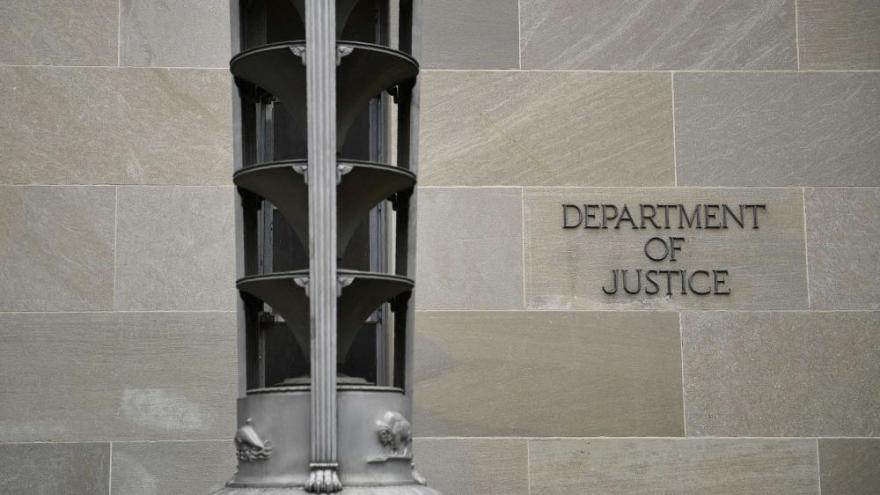 A sign is seen on the Department of Justice building in Washington, DC on November 7, 2018. - The US attorney general, Jeff Sessions, said he was resigning at the request of President Donald Trump in a move that raises questions over the future of a bombshell probe into Trump's alleged collusion with Russia.

(CNN) -- The Justice Department's internal watchdog will investigate whether any department official sought to have the department overturn President Joe Biden's election win.

The office of Inspector General Michael Horowitz is launching "an investigation into whether any former or current DOJ official engaged in an improper attempt to have DOJ seek to alter the outcome of the 2020 Presidential Election," it announced Monday.

The probe comes on the heels of reports from The New York Times and The Wall Street Journal that former President Donald Trump attempted to use his Justice Department to challenge the election results, an effort that included the possibility of Trump ousting then-acting Attorney General Jeffery Rosen.

The Times said in a report published Friday that Jeffrey Clark, a lawyer for the DOJ, nearly convinced Trump earlier this month to remove Rosen and use the department to undo Georgia's election results.

Clark -- who appealed to the former President's false claims of election fraud -- met with Trump earlier in January and told Rosen following the meeting that the then-President was going to replace him with Clark. Clark would then move to keep Congress from certifying the election results in Biden's favor, according to the paper.

Rosen demanded to hear the news straight from Trump, the Times said, and arranged a meeting on the evening of January 3 -- the same day that Trump's call with Georgia Secretary of State Brad Raffensperger, in which Trump pressured the state official to find enough votes for him to win Georgia, came to light.

Clark is no longer at the department -- which could present a problem for Horowitz if he wants to talk to the lawyer, according to Michael Bromwich, a former Justice Department inspector general.

The inspector general "doesn't have (testimonial) subpoena power for people who are outside of government and so they may run into a little bit of a wall if Clark, for example, decides not to cooperate," Bromwich said.

Senate Majority Leader Chuck Schumer called for Horowitz to launch a probe on Saturday, writing in a tweet that it was "unconscionable a Trump Justice Department leader would conspire to subvert the people's will."

This story has been updated with Clark's response.