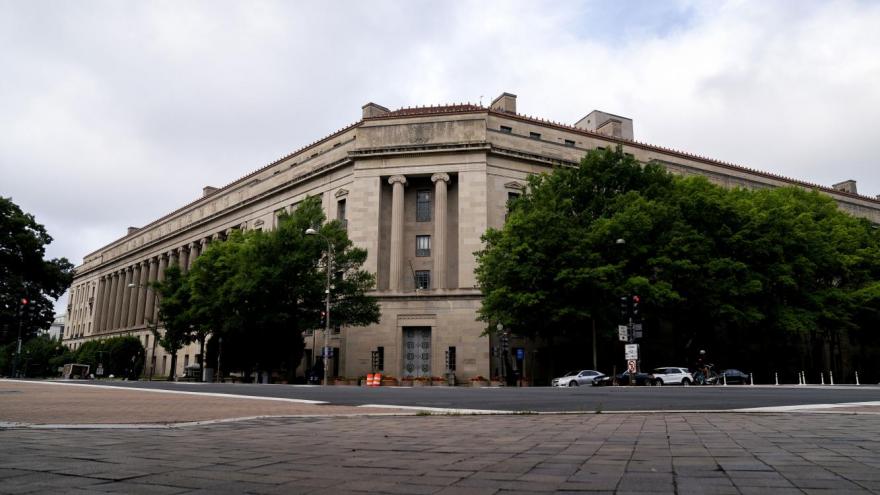 The Department of Justice will not open a civil investigation into the Covid-19 response in state nursing homes in New York, Pennsylvania and Michigan, after the department was seeking to determine whether policies issued during the pandemic requiring Covid-19 patients to be admitted into the facilities may have contributed to deaths.

(CNN) -- The Department of Justice will not open a civil investigation into the Covid-19 response in state nursing homes in New York, Pennsylvania and Michigan, after the department was seeking to determine whether policies issued during the pandemic requiring Covid-19 patients to be admitted into the facilities may have contributed to deaths.

The announcement in a letter sent to GOP Rep. Steve Scalise prompted swift outrage from him and other Republicans who have accused New York Gov. Andrew Cuomo, a Democrat, of covering up Covid-19-related deaths in nursing homes in his state. Cuomo has denied any wrongdoing, but the state's handling of the data surrounding deaths in long-term care facilities has been the subject of an ongoing criminal investigation by the US attorney's office in Brooklyn.

In a letter on Friday that was obtained by CNN, the Justice Department said it "decided not to open a CRIPA (Civil Rights of Institutionalized Persons Act) investigation of any public nursing facility within New York, Pennsylvania, or Michigan at this time" after reviewing information provided by the states and other available information.

The Justice Department confirmed it opened an investigation in October 2020 into two facilities in New Jersey.

A Justice Department spokeswoman told CNN the department would not comment beyond what is in the letter. Cuomo's office declined to comment to CNN, and messages left with the other governors' offices were not immediately returned Saturday.

On Friday, Scalise, who is the top Republican on the House Select Subcommittee on the Coronavirus Crisis, called the Justice Department's decision "outrageous."

"Grieving families deserve answers and accountability. It's unconscionable that (President Joe) Biden's Department of Justice refuses to investigate the deadly actions that went against (Centers for Disease Control and Prevention's) medical guidance taken in these states," Scalise said in a statement.

New York Rep. Elise Stefanik, the No. 3 Republican in the House, tweeted Friday that the decision was "shameful" and called on the Justice Department's inspector general to look into the matter.

Last August, the Justice Department under the Trump administration requested Covid-19 data from the four states that issued orders requiring Covid-19 patients to be admitted to nursing homes, which the department said "may have resulted" in the deaths of nursing home residents.

Cuomo, who was widely lauded in Democratic circles for his leadership in the early days of the pandemic, has since been the focus of significant scrutiny over his administration's guidance regarding Covid-19 and nursing homes.

In March 2020, his administration issued an advisory barring nursing homes from refusing to admit patients solely on the basis of a confirmed or suspected Covid-19 diagnosis in order to free up hospital beds.

The directive "may have put residents at increased risk of harm in some facilities," according to a January report from the state attorney general. The attorney general also found that some nursing homes throughout the state failed to take proper infection control measures and did not isolate Covid-19 patients in nursing homes.

Cuomo's administration also underreported the number of Covid deaths among New York's long-term care patients, according to the report, and then delayed sharing potentially damaging information with state lawmakers.

One of Cuomo's top aides admitted in February that the administration tried to delay the release of the data, wary of a federal Justice Department preliminary inquiry.

Facing pressure, Cuomo in February defended his administration's delaying release of data on Covid-19 deaths at long-term care facilities, but took responsibility for not providing the data when lawmakers requested it.

He claimed that his administration was following CDC guidelines at the time and that recovering Covid-19 patients were transferred out of hospitals as soon as possible so they wouldn't contract a secondary infection. He also said nursing homes could only accept the patients if they were able to care for them.

He also attributed the virus' spread in nursing homes to the caregivers rather than his administration's directive.

The nursing home scandal is one of several recent crises for the embattled Democratic governor, who has also been under investigation for allegations of sexual harassment. He has refused calls to step down and has denied knowingly acting inappropriately.