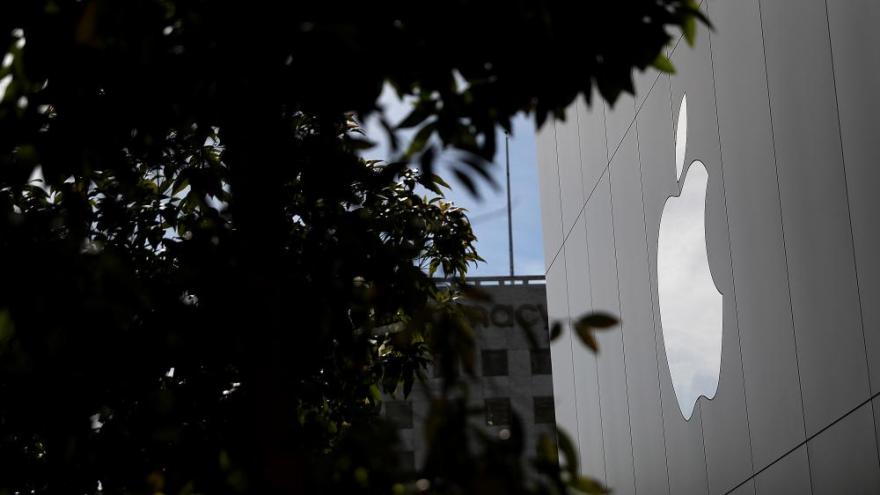 The Justice Department sent a broad request in February 2018 to Apple as part of its investigation that collected data on members of Congress, staffers and their families. Pictured, the Apple logo on February 1, 2018 in California.

(CNN) -- The Department of Justice sent a broad request in February 2018 to Apple as part of its investigation that collected data on members of Congress, staffers and their families. The department demanded metadata on 73 phone numbers and 36 email addresses from Apple, the company said Friday evening.

Apple received the subpoena from the Justice Department on Feb. 6, 2018, but it contained no information about who the investigation was targeting or why, the company said. Apple also said determining who the targeted accounts belonged to would have required extensive research.

A person familiar with the request said the subpoena requested information on the targeted accounts beginning with the inception of the accounts through the day of the subpoena.

Apple said it limited the information it provided to metadata and account subscriber information and did not provide any content such as emails or pictures. While Apple says it would have normally informed customers, a nondisclosure order prevented it from doing so in this case, the company said.

The nondisclosure order was extended three times, each time for a year, Apple said. When it was not extended for a fourth time, Apple said it informed the affected customers on May 5, 2021.

"In this case, the subpoena, which was issued by a federal grand jury and included a nondisclosure order signed by a federal magistrate judge, provided no information on the nature of the investigation and it would have been virtually impossible for Apple to understand the intent of the desired information without digging through users' accounts," Apple said in the statement. "Consistent with the request, Apple limited the information it provided to account subscriber information and did not provide any content such as emails or pictures."

The subpoena was signed by prosecutor Jocelyn Valentine and authorized by Magistrate Judge Deborah Robinson in DC federal court, the source familiar with the request said.

The company also says it believes similar requests were sent to other technology companies and internet service providers.

As with the subpoena sent to Apple, Microsoft was subject to a gag order, a company spokesperson said. The gag order was in effect for more than two years.

After Microsoft notified the account holder of the subpoena, that person contacted Microsoft informing the company of their status as a congressional staffer, Microsoft said.

"In 2017 Microsoft received a subpoena related to a personal email account," the statement said. "As we've said before, we believe customers have a constitutional right to know when the government requests their email or documents, and we have a right to tell them. In this case, we were prevented from notifying the customer for more than two years because of a gag order. As soon as the gag order expired, we notified the customer who told us they were a congressional staffer. We then provided a briefing to the representative's staff following that notice. We will continue to aggressively seek reform that imposes reasonable limits on government secrecy in cases like this."