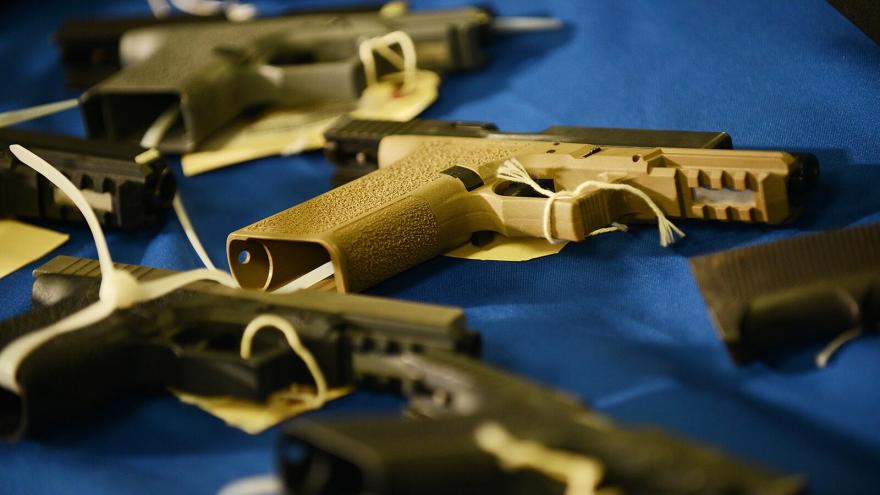 The Justice Department will propose a rule that seeks to reclassify the definition of a firearm to close the regulatory loophole associated with producing unmarked weapons, known as "ghost guns." Pictured are ghost guns that were secured by the DC Metropolitan Police Department in Washington, D.C., Friday, Feb. 28, 2020.

(CNN) -- The Justice Department will propose a rule that seeks to reclassify the definition of a firearm to close the regulatory loophole associated with producing unmarked weapons, known as "ghost guns."

"This proposed rule would help keep guns out of the wrong hands and make it easier for law enforcement to trace guns used to commit violent crimes, while protecting the rights of law-abiding Americans," Attorney General Merrick Garland wrote in a Friday news release. "Although this rulemaking will solve only one aspect of the problem, we have an obligation to do our part to keep our families and our neighborhoods safe from gun violence."

From 2016 to 2020, more than 23,000 un-serialized firearms were reported to have been recovered by law enforcement from potential crime scenes -- including in connection with 325 homicides or attempted homicides, according to the news release.

Garland discussed the need for the proposed rulemaking by the Justice Department's Bureau of Alcohol, Tobacco, Firearms and Explosives earlier this week during a 2022 budget hearing before a Senate subcommittee.

Democratic New York Rep. Grace Meng asked Garland during Tuesday's budget hearing how the Justice Department could tackle ghost guns that can be made with "unregulated kits, parts or 3D printers using computer codes" and sold without identifying marks, "leave no paper trail and can be acquired without even a background check."

Once implemented, the proposed rule will help regulate the sale of the "ghost guns" in various ways including, keeping guns from being sold to convicted felons and other prohibited buyers with background checks; setting out requirements for federally licensed firearms dealers to have a serial number added to 3D printed guns or other un-serialized firearms they take into inventory and requiring that manufacturers include a serial number on the firearm "frame or receiver" in easy-to-build firearm kits.