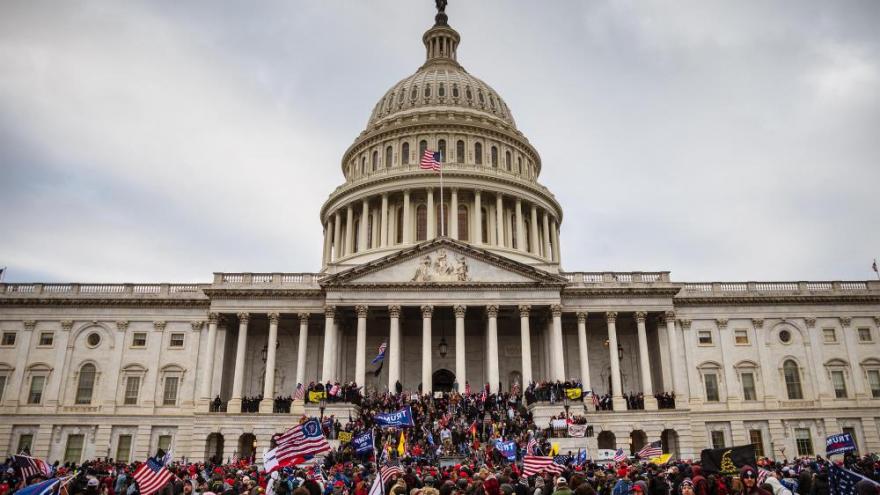 The Justice Department has charged at least 400 people in connection with the January 6 insurrection at the US Capitol, according to CNN's latest review of court documents.

(CNN) -- The Justice Department has charged at least 400 people in connection with the January 6 insurrection at the US Capitol, according to CNN's latest review of court documents.

The 400 known defendants come from 43 states and Washington, DC, according to CNN's analysis.

The massive federal inquiry has added several defendants nearly each day since the attack, and federal prosecutors said in a recent court filing that they expect to charge at least 500 people.

There are hundreds of still-unidentified photographs of rioters on the FBI's "most wanted" website, indicating that plenty of people who stormed the Capitol haven't been charged yet -- and that the unprecedented investigation continues.

The deadly attack injured more than 100 police officers, halted Congress' counting of the Electoral College votes for more than five hours and forced lawmakers into lockdown when pro-Trump rioters overran the US Capitol Police.

The Justice Department secured its first guilty plea from a rioter on April 16, a watershed moment in the probe when a heavy metal guitarist with ties to the Oath Keepers paramilitary organization pleaded guilty to two crimes related to the Capitol insurrection.

With the milestone earlier this month of 100 days since the insurrection, the unprecedented progress and unexpected roadblocks of the investigation are becoming clear. The sweeping nationwide manhunt has lived up to the early predictions from law enforcement officials that this would be the largest federal investigation since the 9/11 attacks.

Investigators quickly nabbed the "low-hanging fruit" rioters who brazenly posted about their exploits online. Some of the rioters even turned themselves in. But investigators also went through the painstaking process of examining tens of thousands of hours of video to identify the pro-Trump rioters allegedly responsible for the most vicious attacks against police officers.

Some arrests so far have included colorful details gleaned from court documents. Lawyers for a man photographed sitting at a desk in House Speaker Nancy Pelosi's office during the riot are arguing that he called her a "biatch," not a "b*tch," in calling for his release, and another Capitol rioter was arrested after being turned in by match on online dating app Bumble.