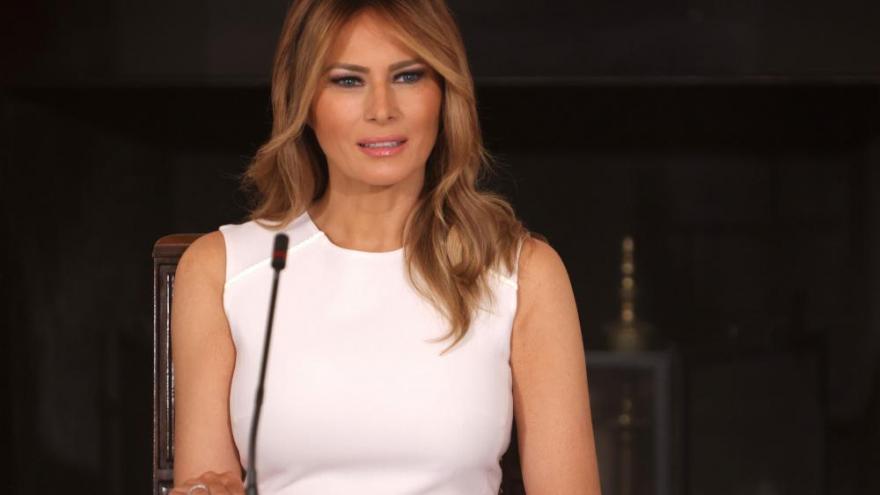 U.S. First Lady Melania Trump speaks during a roundtable on sickle cell disease in the State Dining Room of the White House on September 14, 2020, in Washington, DC.

(CNN) -- The Justice Department is suing Stephanie Winston Wolkoff, an ex-friend and former adviser to first lady Melania Trump, claiming she breached a confidentiality agreement by publishing a tell-all book, according to a lawsuit filed in the Washington, DC, District Court on Tuesday.

The complaint asserts that Wolkoff violated a nondisclosure agreement and asks for profits from the book to be secured in a government trust. It also says that neither the first lady, her chief of staff nor the White House counsel's office received a draft of the book from Wolkoff and that the former adviser never sought authorization to disclose details of her work for the first lady.

Wolkoff told CNN in a statement she "will not be deterred by these bullying tactics."

"The President and First Lady's use of the US Department of Justice to silence me is a violation of my First Amendment Rights and a blatant abuse of the government to pursue their own personal interests and goals," Wolkoff said. "I fulfilled all of the terms of the Gratuitous Service Agreement and the confidentiality provisions ended when the White House terminated the agreement. With the publication of my book, 'Melania and Me: The Rise and Fall of My Friendship with The First Lady,' I have exercised my right to free expression."

The filing was first reported by Reuters.

Wolkoff's book, "Melania and Me: The Rise and Fall of My Friendship with the First Lady," details the fallout from Wolkoff's working and personal relationship with Melania Trump, including private conversations between the two.

Wolkoff, a former Vogue magazine staffer who oversaw high-dollar events, had known Melania Trump for more than a decade when she was hired to organize the planning of President Donald Trump's inauguration. She was also Trump's first hire for the East Wing, acting as senior adviser to the first lady, writing speeches and helping craft what would become the "Be Best" platform. During her time working for the East Wing, Wolkoff was a special government employee, meaning she was not paid for her services.

As investigations into the inaugural activities unfolded, Wolkoff's relationship with the first lady unraveled, prompted by the amount of money Wolkoff and her events firm allegedly pocketed during the planning and execution of the inauguration, according to CNN.

In her book, Wolkoff describes the inauguration planning as a slapdash effort, claiming that the incoming President didn't understand who was behind organizing the event.

Wolkoff also details the efforts she and, allegedly, Melania took to block the President's daughter Ivanka Trump from appearing in photos of the President's swearing-in ceremony.

Wolkoff also secretly made a recording with the first lady, in which Melania Trump expresses frustration over the criticism of the Trump administration's migrant family separation policy.

The East Wing has previously asserted that Wolkoff breached the nondisclosure agreement. After the recording was made public in the press, the first lady's chief of staff, Stephanie Grisham, said in a statement: "Secretly taping the first lady and willfully breaking an NDA to publish a salacious book is a clear attempt at relevance."

This isn't the first time the Justice Department has gone after former Trump staffers publishing books about their time working in the White House.

The department sued to prevent the release of John Bolton's book, "The Room Where It Happened," about his stint as the White House national security adviser under President Trump.

In 2016, Melania Trump sued The Daily Mail for making false claims about her work as a professional model. In April 2017, the publisher apologized to Trump and agreed to pay $2.9 million in damages in a settlement.