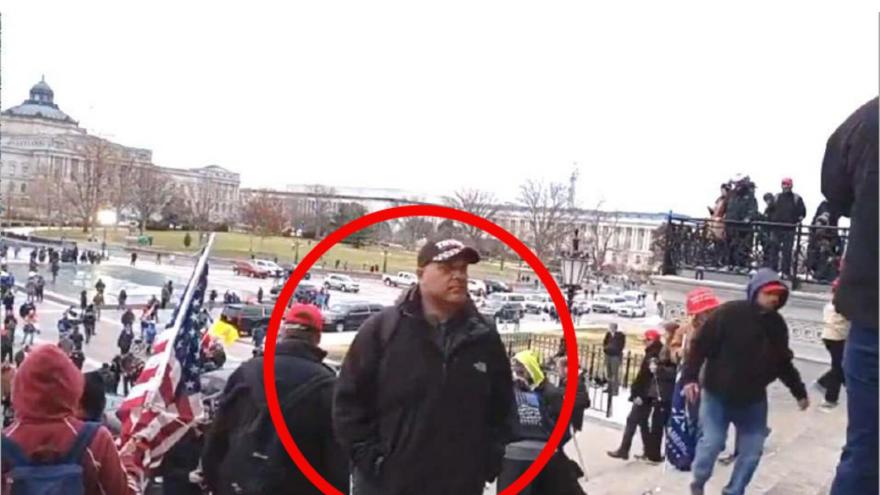 Shane Woods is seen in a frame grab from a video from January 6, as identified in the criminal complaint filed by the US Justice Department.

(CNN) -- The Justice Department announced Thursday that it has charged a US Capitol riot suspect with assaulting a cameraman during the January 6 attack, saying the Illinois man is the first insurrection defendant to be arrested for allegedly harming a member of the media.

Shane Jason Woods, 43, has been charged with a number of federal offenses, including assault on a law enforcement officer, assault in special maritime and territorial jurisdiction, and engaging in physical violence in a restricted building or grounds, according to a statement from the department.

Woods allegedly tripped and pushed to the ground a US Capitol Police officer who had been sprayed with bear mace by a rioter moments earlier, the statement said.

He also allegedly "ran into and tackled" a cameraman outside the Capitol, according to court filings. Officials said publicly available video capturing scenes from the riot showed Woods "walking closely around a cameraman" and that soon after he is "observed running into and tackling this same cameraman as the cameraman is facing away from Woods."

The video then shows Woods fleeing the area where the cameraman was, causing him to "fall to the ground and drop his camera," according to the documents, which said Woods was among a group of rioters who had damaged equipment that was left after members of the media fled the area.

Woods is scheduled to make an initial appearance in federal court Thursday afternoon. It was not immediately clear whether he has an attorney.

"I could not be more proud of the extraordinary effort by investigators and prosecutors to hold accountable those who engaged in criminal acts that day," Garland said in a statement.