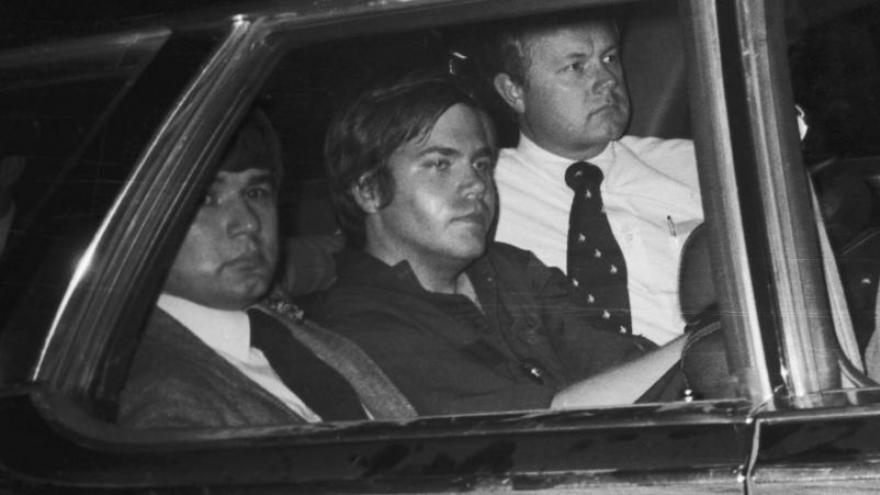 In this file photo from April 1981, John Hinckley, Jr. is driven away from U.S. District Court. Hinckley was seated in the center seat of a nine-seat section station with agents assigned to protect him, seated in front, alongside, and behind him.

(CNN) -- The Justice Department reached a deal with John Hinckley Jr., who tried to assassinate President Ronald Reagan in 1981, to free him from the strict conditions of release that he's been living with for several years.

Hinckley was released from a mental hospital in 2016 and has lived in Williamsburg, Virginia, with his mother. The deal would grant him "unconditional release," without restrictions on his movements or Internet activity, and would go into effect in June, his lawyer said during a court hearing on Monday.

US District Judge Paul Friedman said that he will approve the deal.

"I followed the law, I followed the evidence, and I followed the science," Friedman added. "I'm very comfortable with where we are. I think it's probably overdue ... My caution, with taking incremental steps, should give us all a great deal of comfort that everything is going to be just fine."

Hinckley was found not guilty by reason of insanity and spent nearly 30 years at a mental hospital. Over time, he underwent extensive mental health treatment and received permission from judges to visit with his family. Friedman released him from the hospital in 2016, and he moved in with his mother in Williamsburg. Last year, he got judicial clearance to start posting music online, under his own name.

There is an extensive body of evidence from independent psychologists and experts that Hinckley's "mental disease is in full, stable and complete remission, and has been so for over three decades" his attorney Barry Levine said at the hearing. Doctors have repeatedly concluded that Hinckley doesn't pose a risk to the public and is sincerely committed to continuing his therapy and treatment, Levine added.

Through his attorney, Hinckley offered an apology to the Reagan family, and to the other victims of the 1981 assassination attempt, including a police officer, Secret Service agent and White House press secretary James Brady, who was paralyzed.

"His apologies are heartfelt and one of profound regret," Levine said. "... Perhaps, it is too much to ask for forgiveness."

More recently, Hinckley has started a YouTube page and posts videos of himself playing guitar, singing covers and original songs. He is an artist and wants to continue making music, Levine said.

"His future, we think, is bright. And I hope others with a good sense of charity would wish him well," Levine said. "...I would hope people would see this as a victory for mental health. People who have been ravaged by mental disease, with good support and access to treatment, can actually become productive members of society."

The deal with Hinckley also comes nearly a month after Sirhan Sirhan, a man convicted of assassinating Sen. Robert F. Kennedy in 1968, was recommended for parole.

A California parole board voted in favor of releasing Sirhan after he spent more than 50 years in jail for assassinating Kennedy, finding he was no longer a threat to public safety. The final decision to release Sirhan will ultimately be up to the governor of California.

Many of Kennedy's children strongly oppose his release, though two of Kennedy's sons spoke in favor of Sirhan to the parole board.