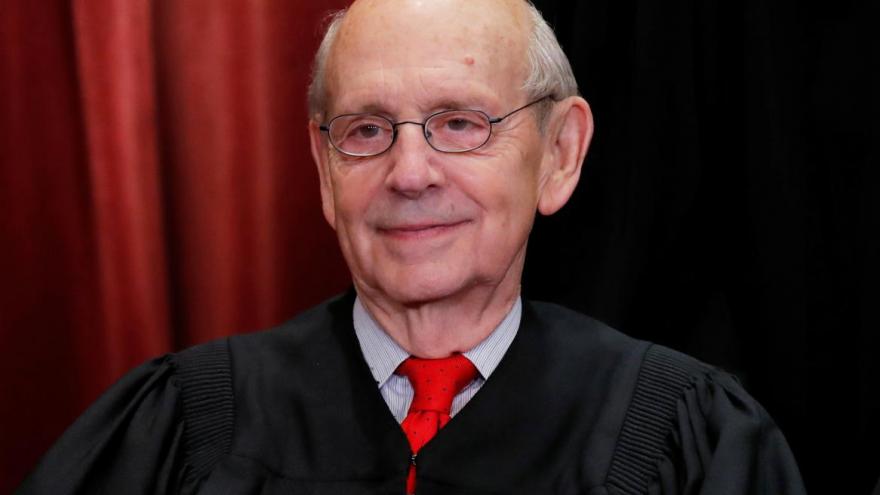 Justice Stephen Breyer spoke Thursday about the death of his colleague Ruth Bader Ginsburg saying, "my goodness, I'll miss her." In this image, Breyer is seen during a group portrait session at the Supreme Court in Washington, November 30, 2018.

(CNN) -- Justice Stephen Breyer spoke Thursday about the death of his colleague Ruth Bader Ginsburg saying, "my goodness, I'll miss her" but he declined, when asked, to comment on her wish -- reportedly made days before she died -- to have her seat filled after the election.

Breyer allowed that justices do think about when they should retire from time to time , as a part of the "aging process", but he insisted that his job, particularly at fraught times, is to "stay out of politics."

"The more the political fray is hot and intense, the more we stay out of it," he said.

The comments came as Breyer appeared via Zoom for an event hosted by the Edward M. Kennedy Institute, moderated by MSNBC's Ari Melber.

Breyer tried to press his perspective of the court while artfully dodging news generating questions about controversial cases or the upcoming confirmation hearing of Judge Amy Coney Barrett.

Melber asked Breyer on his views on when justices should over turn precedent. The issue -- called "stare decisis" in legalese -- will be a central theme next week as the country tunes into Barrett's confirmation hearings and democrats attempt to ascertain whether President Donald Trump's third nominee would vote to gut or overturn cases such as Roe v. Wade.

Without referring to a specific case, Breyer noted that overturning precedent can cause problems because the law "has to stay pretty stable." He said that sometimes it is necessary in cases like Plessy v. Ferguson or Brown v. the Board of Education.

"Ultimately, it's up to your own conscience, just be sure it's very rare," he said.

Breyer also spoke briefly about the confirmation process noting that "it's important to remember, it may be a political process that leads to a nomination of a judge" but that "once that black robe goes on you are a judge."

There is "no point", he said, "deciding things on political grounds."

Breyer, who sometimes reveals a less than robust grasp of modern technology, struggled at first with his computer connection.

"My machine decided to break down," he laughed, and then without skipping a beat, the pragmatic justice picked up his computer, talking all the while, and treated the virtual audience of more than 1,000 participants to a tour down an elegant stairway before settling into what looked like his well-appointed living room. "Here, it's fine," he said continuing his talk.

Of Ginsburg, Breyer said that just a few weeks ago he spoke to her over the phone and she was schooling him about opera in Boston. She also sent him a tiny T-shirt for his new grandson that read "future law clerk for RBG."

He said that when he returned to the court for her memorial service -- after several months of working remotely -- he found a birthday card that she had sent him in August. She had underlined the fact that Breyer, at 82, was her younger colleague.

He remarked that Ginsburg was comfortable with silences even at a dinner party. He said that his own wife had told him, "You know, Stephen, not every silence needs to be filled."

"It was a good point," Breyer allowed.