Jussie Smollett has again been indicted in Chicago over last year's hate crime claims. Here's how the case has unfolded 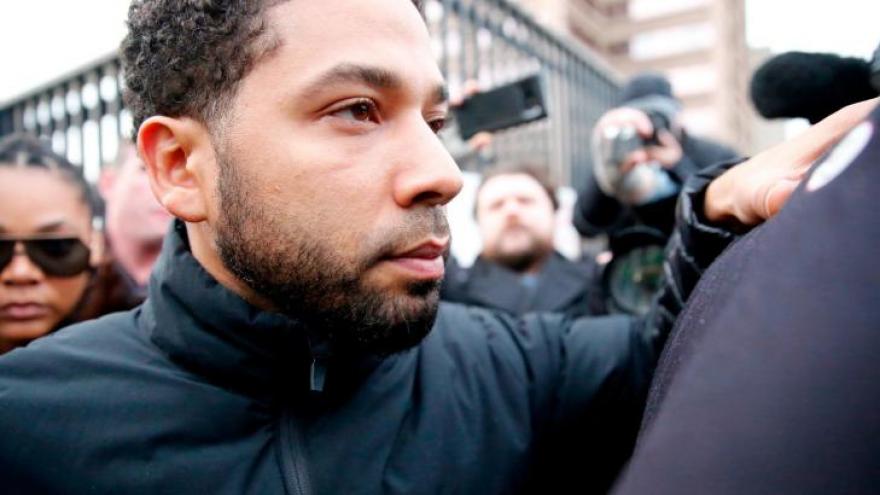 The announcement Tuesday that Jussie Smollet has, again, been indicted by a Chicago grand jury is the latest twist in a headline-grabbing case that has taken numerous turns in the year since the actor said he was the victim of a racist and homophobic attack. Seen here, Smollett leaves Cook County jail after posting bond on February 21, 2019 in Chicago, Illinois.

(CNN) -- The announcement Tuesday that Jussie Smollet has, again, been indicted by a Chicago grand jury is the latest twist in a headline-grabbing case that has taken numerous turns in the year since the actor said he was the victim of a racist and homophobic attack.

Here's how we got here:

Smollett, 37, was an actor on the Fox show "Empire" on January 29, 2019 when he reported to police that he had been attacked in Chicago in an incident that ended with a noose around his neck. Police initially investigated the case as a possible hate crime.

After investigating, then-Chicago Police Superintendent Eddie Johnson, said Smollett had paid brothers Olabinjo and Abimbola Osundairo -- whom he met on the TV show -- $3,500 to stage the attack for publicity.

Johnson said Smollett, who is gay and black, wanted to take "advantage of the pain and anger of racism to promote his career."

Smollett has repeatedly denied making up or orchestrating the attack.

Cook County State's Attorney Kim Foxx recused herself from the case in mid-February in response to rumors she was connected to Smollett's family. First assistant state's attorney Joe Magats became the lead prosecutor.

Smollett was initially indicted in March on 16 counts of felony disorderly conduct, charges that were later dropped.

Dan K. Webb was assigned as a special prosecutor in August to investigate how local prosecutors handled the case.

Smollett told detectives that he was walking back from a Subway sandwich shop at about 2 a.m. when he was attacked by two people yelling racial and homophobic slurs.

He said the attackers struck him, doused him with a chemical substance and put a noose around his neck.

With the rope and Smollett's sweater in their custody, authorities began to investigate a possible hate crime. Interviews with more than 100 witnesses and extensive camera footage led police to take the Osundairo brothers into custody as they came through airport customs returning to the US on February 13.

But after speaking with the brothers, their attorney told police "something smelled fishy."

Further investigation led police to footage of the brothers buying supplies, including the rope, that would be used in the attack, prosecutors said.

Prosecutors said they also found that Smollett texted the brothers days before the incident saying he needed their "help on the low," phone records showed that he talked to them before and after he said the attack took place and prosecutors said that Smollett even took them to the scene to show them where it should take place to be caught on camera.

Chicago police no longer believed a hate crime had taken place. They believed Smollett made a false report and paid the brothers to stage an attack because, they said, he was dissatisfied with his salary.

Legal and career fall out

On February 20, Chicago police spokesman Anthony Guglielmi tweeted that Smollett was facing a felony charge of disorderly conduct for filing a false report. He was arrested the next day and soon after was released on a $100,000 bond.

The charges triggered a reversal from the "Empire" producers who had stood by Smollett. On February 22, to "avoid further disruption on set," they announced the decision to remove his character from the final two episodes of the season.

After his release, Smollett went to the set to apologize to the cast and crew but maintained his innocence, a person at the meeting told CNN.

In March, a grand jury indicted Smollett on 16 felony counts.

Later that month, in a stunning reversal, Magats announced that all charges against the actor would be dropped.

As a "deferred type of prosecution," Smollett agreed to forfeit his $10,000 bond and do community service, Magats said.

Smollett's attorneys saw it as vindication, but Chicago Mayor at the time Rahm Emmanuel described it as a "whitewash of justice" that sends a message that people with power and influence are held to a different standard.

In April, Foxx asked for the Cook County inspector general to investigate her office's handling of Smollett's case.

With no criminal charges on the table at that point, the city of Chicago filed a lawsuit against the actor to recover the more than $130,000 in police overtime utilized to investigate Smollett's claim of a hate crime.

The Osundairo brothers filed a lawsuit against Smollett's legal team for defamation over claims including that they attacked the actor and dealt steroids.

In August, Webb was appointed as a special prosecutor to investigate the decision to drop the charges -- and was given authority to file new charges as appropriate. Early this year, Chicago police issued a search warrant ordering Google to turn over a year of Smollett's personal data including search history, photographs, files and geolocation to Webb.

On Tuesday, Webb said in a statement his office "has now completed all of its investigative steps regarding Jussie Smollett, and has made the decision to further prosecute Mr. Smollett."

A Cook County, Illinois, grand jury returned a six-count indictment against him for making false reports to police that he was a victim of a hate crime

Smollett's attorney Tina Glandian said the special prosecutor "has not found any evidence of wrongdoing whatsoever related to the dismissal of the charges against Mr. Smollett."

"Rather, the charges were appropriately dismissed the first time because they were not supported by the evidence," Glandian said in a statement.

Smollett is scheduled to appear in court February 24.