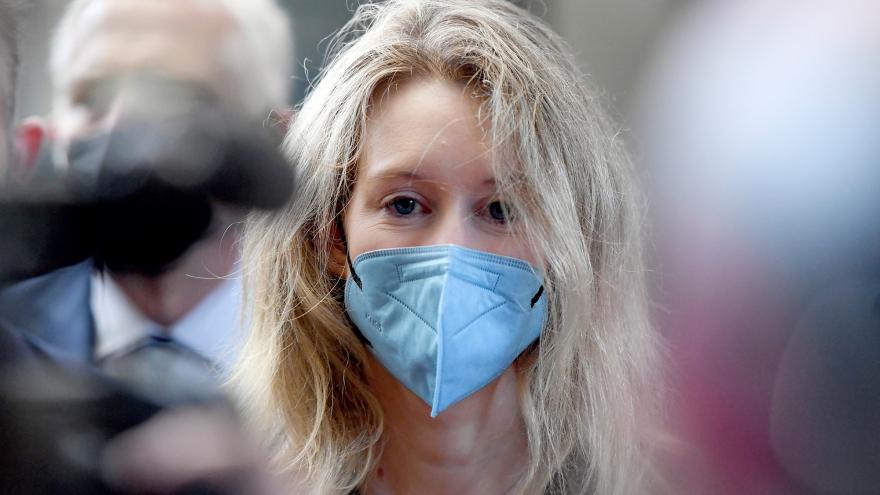 (CNN) -- Jury selection began Tuesday in a San Jose federal courtroom for the long-awaited trial of Elizabeth Holmes, the former CEO and founder of Theranos.

The day kicked off what is likely to be a months-long affair under intense media scrutiny. Central to questioning of potential jurors was the concern that the frenzy around Holmes -- including multiple documentaries and podcasts on her rise and fall -- might bias those who will ultimately determine her fate.

Holmes arrived at the Robert F. Peckham Federal Building shortly before 8:30am PT wearing a blue medical mask and dark blazer. She was immediately surrounded by news media, some of whom had arrived several hours earlier to secure a seat in the courtroom.

Over the course of the day, Holmes' attorneys, federal prosecutors and Judge Edward Davila questioned potential jurors. Of the 39 juror candidates on Tuesday, 14 were excused for various reasons, including the financial strain of sitting on a jury for so long. On Wednesday, 46 new potential jurors are expected to come for questioning.

Holmes, 37, was indicted more than three years ago on multiple federal fraud and conspiracy charges over allegations she knowingly misrepresented the capabilities of her company's proprietary blood testing technology. She has pleaded not guilty and faces up to 20 years in prison.

Of particular concern for Holmes and her defense is how much exposure potential jurors have had to the deluge of media coverage of her, her company, and the trial. In the company's heyday, Holmes was the subject of much fascination and media attention that glamorized her and her efforts. Her downfall hasn't dimmed that spotlight -- from documentaries, a forthcoming limited series, and a planned feature film to at least two podcasts devoted to covering the trial.

In addition to 12 jurors, there will be five alternates. The delays to the trial — due to the coronavirus pandemic and the birth of Holmes' first child — may have only complicated finding a pool of jurors who've yet to hear about Holmes or Theranos.

Judge Davila was careful in how he phrased questions to potential jurors about media coverage to avoid having respondents share details about what they've consumed about the case so as not to bias other potential jurors. Judge Davila asked them when they last read or heard something related to Holmes or Theranos, but not about the specifics of what they had read. He told potential jurors that they should disclose any controversial or strong opinions privately rather than within the group.

Potential jurors mentioned coming across news related to Theranos and Holmes everywhere from YouTube, to Reddit (r/investing), to documentaries, and NPR. But many said they felt they'd be able to remain impartial if selected. (One said he received an NPR notification about jury selection starting Tuesday. "My first thought was 'Yeah, yeah, I know,'" he said.)

One potential juror said she previously read "Bad Blood," the definitive book on the rise and downfall of Theranos by reporter John Carreyrou. She said she had assumed that indicating she'd read that book as part of a lengthy potential questionnaire would disqualify her from serving on the jury, regardless of whether she confirmed or denied being able to set any potential biases aside.

Some said they recalled hearing about the company or Holmes but couldn't pinpoint exactly what they consumed. One potential juror said she believed she'd seen "First Blood."

Ahead of jury selection, nearly 200 prospective jurors completed the 28-page-long final jury questionnaire, which asked questions about everything from their vaccination status to their knowledge of Holmes and their media consumption habits. Roughly half indicated they had consumed media concerning the case, according to a court filing last week.

The first dismissal on Tuesday was a man who said he worked as a producer at a radio station. He said the newsroom had run coverage in anticipation of jury selection. "Audio is all around me," he said, noting news, including of the trial, is hard to avoid due to his job.

Judge Davila suggested to potential jurors before a lunch break that they turn off news alerts on their phones to avoid media exposure.

Coverage of Holmes and Theranos has significantly ramped up in anticipation of the trial. Over the weekend, the court unsealed documents pertaining to Holmes' possible defense -- that she may claim she experienced a decade-long abusive relationship with her ex-boyfriend, also a former Theranos executive, who will be tried separately. (According to a court filing, he "adamantly denies" the claims.)

Potential jurors were also asked whether they had any experience with interpersonal abuse or violence. Several said they, or loved ones, had.

The pandemic, which has delayed the trial several times, is very much looming in the backdrop. Judge Davila said there were no-shows among potential jurors slated to attend today, citing some who phoned in about experiencing symptoms and were told to stay home. He said all court staff had been vaccinated and spoke of a newly installed $7 million HVAC system. "The air is completely circulated in this court room approximately every 10 minutes," he said. "I hope that provides you some comfort."

Some of the potential jurors also spoke about hardships they'd experienced during the pandemic, saying they'd hoped to take much-needed vacations that would be hindered by a months-long trial.

A number of other potential jurors not in the court room Tuesday were excused for reasons including health, childcare, financial hardship, bias, attending school, work obligations, and commute challenges. Attorneys for the prosecution and the defense have agreed to excuse any potential jurors who are unvaccinated. Nine were excused for indicating on the questionnaire that they were unvaccinated.