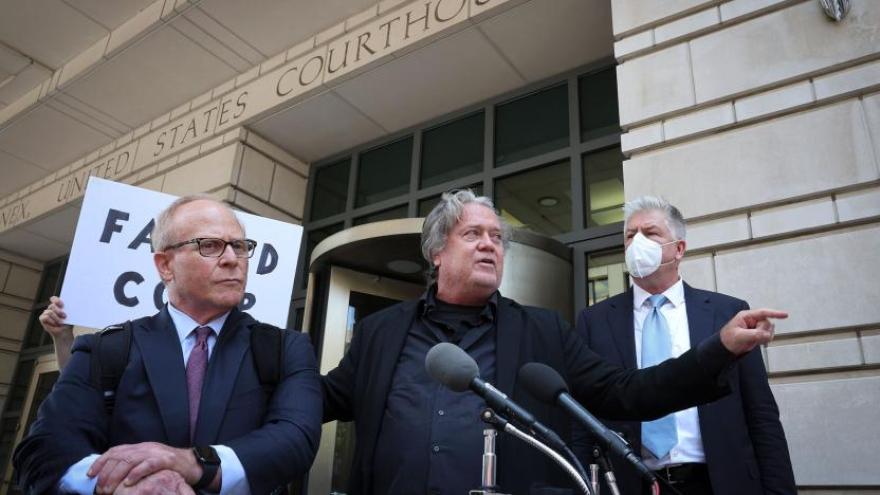 Steve Bannon, center, speaks to the media outside of a Washington, DC, court house on June 15, 2022.

(CNN) -- Steve Bannon is headed to trial on two criminal charges for his failure to comply with the House's January 6, 2021, investigation 10 months after receiving subpoenas from the select committee.

Proceedings began Monday with jury selection at the federal courthouse in Washington, DC. Twenty-two potential jurors have been found, and the 12 that make up the jury and two alternates will be selected Tuesday morning. Opening arguments will begin soon after.

The polarizing long-time Trump ally has always been at the top of the January 6 witness list for House investigators. But Justice Department prosecutors say the trial is intended to punish Bannon for noncompliance with the subpoenas, rather than coerce him into sharing information.

The case is a major test of what leverage Congress has when a witness evades a House subpoena. Bannon's is the first of two similar House select committee subpoena cases to head to trial; a contempt case against former White House trade adviser Peter Navarro is still in its early stages.

Bannon's trial also carries special relevance for the House panel as it continues to negotiate bringing in additional witnesses, and as it prepares for a major primetime hearing Thursday night intended to spotlight what committee members have called former President Donald Trump's "dereliction of duty" on January 6.

During Monday's jury selection process, potential jurors were not pressed about their general feelings about Bannon or Trump.

They were, however, asked about their news consumption of the House investigation and about this case itself. Some said they've consumed a little of the House hearings, if that.

Many of the potential jurors said they've heard minimally about Bannon's case, yet a large number of them have taken in at least some of the select committee public hearings. But awareness alone isn't enough for them to be tossed from the jury pool.

Among the jurors who qualified for the 22, there is a man who works with Covid-19 testing, a woman retired from working for a union who's now writing a dissertation and a self-described "recovering" lawyer who now works at the State Department.

The lawyer-turned-government-official told the judge she thought executive privilege might be part of the case, and that the case was about whether Bannon had to testify, or was protected.

It's not clear if Bannon's legal team will be able to make any arguments that even mention executive privilege to the jury. The judge, US District Judge Carl Nichols, allowed her to continue being a potential juror because her knowledge of the case was limited.

Bannon's team has repeatedly argued that pre-trial publicity, especially with the congressional hearings, should prompt his case at least to be delayed.

But many potential jurors said they haven't formed an opinion or know little of the details and weren't quizzed extensively about Bannon's political history.

One potential juror said she had a "high-level awareness" of the select committee proceedings and the case, and heard not everyone had responded to subpoenas they received -- even if they should have. But "the whole story we haven't heard yet," the legal aid worker told the judge. "I'm presuming you'll have to explain the law to us."

She remained in the jury pool.

Another potential juror was tossed from the pool after he told the judge he watched all the select committee hearings, then criticized Republicans who say the election was stolen, and, looking toward Bannon, said, "I do believe he's guilty."

Prosecutors pledge that their case against Bannon will be presented succinctly, over just a few days, with only two or three prosecution witnesses. That list includes House committee investigators.

It's unknown how extensive Bannon's defense will be, or if he will want to take the stand in his own defense. He will not be able to force House members to testify, the judge has said.

Early in the case, Bannon vowed to make the proceedings the "misdemeanor from hell for (Attorney General) Merrick Garland, (House Speaker) Nancy Pelosi and (President) Joe Biden." But at a recent court hearing, his defense attorney David Schoen complained, "What's the point of going to trial here if there is no defense?"

Bannon -- who accepted an 11th-hour pardon from Trump in 2021 as he was facing conspiracy wire fraud and money laundering charges in Manhattan's federal court related to a border wall fundraising scheme -- has made a series of attempts in court in recent days to stop the trial, to fashion more of a defense, or to prepare for possible appeals.

So far, Nichols has overwhelmingly sided with the Justice Department on what evidence the jury can hear, cutting off Bannon's ability to try to defer to advice his attorney gave him or to use internal DOJ policies on presidential advisers that he hoped might protect him.

In recent weeks, Trump indicated he wanted to waive any executive privilege that might have applied to Bannon, and Bannon suggested he may be interested in speaking with the House committee -- a series of events that Bannon's team now wants to try to show to the jury. But his ability to bring up arguments about executive privilege will be, at best, severely limited. Bannon was not a government official during the period the committee is probing.

A federal grand jury indicted the right-wing figure in November on two counts of criminal contempt -- one for his failure to provide testimony demanded by the House select committee's subpoena in the fall and the other for his failure to produce documents. A key issue at trial will be whether the jury agrees with prosecutors and the House that Bannon's October subpoena deadlines were final, and that he deliberately disregarded them.

Both charges he faces are misdemeanors. But if he is found guilty, each carries a mandatory minimum of 30 days in jail.

Bannon was one of the first potential January 6 witnesses the House committee subpoenaed -- and he is one of a handful of people the committee has held in contempt. The committee said it wanted to obtain his documents and ask him questions because Bannon had contact with Trump, was in the so-called war room of Trump allies at the Willard hotel in Washington as the riot unfolded, and made a prediction on his podcast before the riot that "all hell" was "going to break loose."

"In short, Mr. Bannon appears to have played a multi-faceted role in the events of January 6th, and the American people are entitled to hear his first-hand testimony regarding his actions," the House committee said in its report putting forward a contempt resolution against Bannon.

When Bannon was facing deadlines in October, his attorney Robert Costello told the committee Bannon would not be cooperating with the investigation because of instructions from Trump that said he should, "where appropriate, invoke any immunities and privileges he may have."

Since then, criminal investigators have interviewed Costello, as well as a Trump lawyer, Justin Clark, in building their case. According to their description of Clark's statements, he told Costello Trump couldn't shield Bannon from total noncompliance with the subpoenas.

Ahead of Bannon's trial, the House committee has featured details about him in some of its public presentations. At a hearing last Tuesday, the committee revealed White House phone logs indicating Bannon and Trump spoke twice on January 5, 2021, including once before Bannon made his predictions about the next day on the podcast.

The committee has another hearing planned for primetime Thursday evening. Depending on the pace of the proceedings at DC's federal courthouse, and the length of his defense presentation and jury deliberations, Bannon's trial could be over by then.