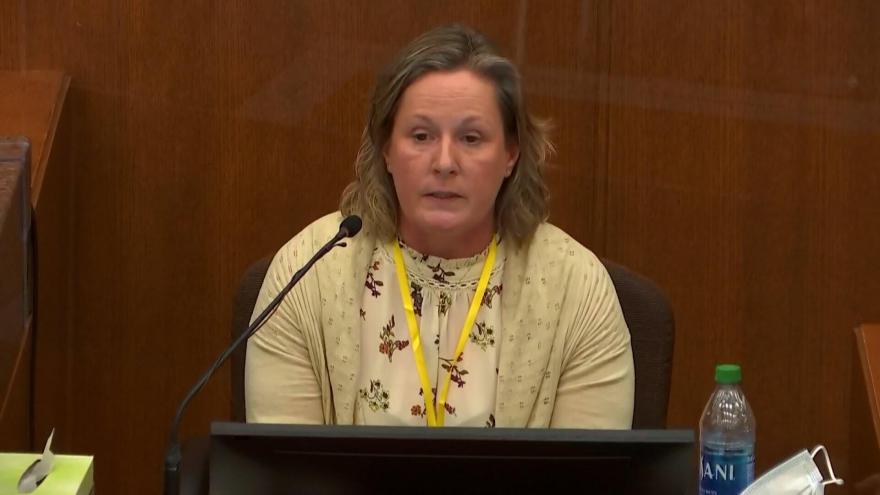 (CNN) -- The jury weighing manslaughter charges against the White former Minnesota police officer who said she mistook her firearm for her Taser and fatally shot Daunte Wright will enter its fourth day of deliberations Thursday.

The jurors have deliberated about 24 hours in the trial of Kim Potter for the fatal shooting of the 20-year-old Black man in April, sending the court a note midway through the process asking what they should do if they can't reach a verdict.

Judge Regina Chu told prospective jurors during jury selection earlier this month that if the proceedings were not finished by Christmas Eve, they would resume Monday, December 27. The jury is sequestered.

Jurors resumed deliberations at 8:25 a.m. CT Wednesday, according to court officials -- after just over nine hours of discussions Tuesday and more than five hours the day before.

Joey Jackson, a defense lawyer and CNN legal analyst, raised the possibility of jury nullification. In such cases juries deliberately reject evidence or refuse to apply the law because it's contrary to their beliefs or sense of fairness.

"What I think the struggle is, you have some jurors who are saying, 'Look, she knew better. This was reckless or, at the least, negligent,' and you have other jurors saying, 'You know what, I just don't know. I think that she was really upset about what happened. She really, you know, was contrite about what happened. Let's give her a pass,'" Jackson told CNN on Wednesday night.

"I think the jury could be relying upon that to further excuse her conduct, and I think that's what the factions are battling about -- accountability or no accountability. Do we give her a pass?"

One of two jury questions Tuesday suggested jurors could be having trouble agreeing on a verdict: "If the jury cannot reach consensus, what is the guidance around how long and what steps should be taken?"

Chu sent them back to the jury room after rereading an earlier instruction that they "deliberate with a view toward reaching agreement if you can do so without violating your individual judgment."

The jury also asked the court that zip ties securing the weapon to an evidence box be removed so the handgun can be held during deliberations.

Chu allowed the zip ties to be removed so jurors can handle the gun, which she said is not loaded and is fully secured.

Potter, 49, has pleaded not guilty to charges of first-degree and second-degree manslaughter.

The trial stems from the fatal shooting of Wright in Brooklyn Center, Minnesota, after police pulled him over for an expired tag and an illegal air freshener. During the stop, officers learned he had an outstanding warrant and attempted to arrest him, but Wright pulled away and tried to drive off.

As video of the incident shows, Potter yelled "Taser" repeatedly before she shot Wright with her handgun. She then said, "Holy sh*t! I just shot him!" She added: "I grabbed the wrong f**king gun, and I shot him." She resigned from the department days later.

The case centers on the jury's interpretation of Potter's fatal error -- whether it was, as the prosecution argued, due to her recklessness and negligence, or whether it was an unfortunate accident that does not rise to the level of a crime, as the defense has argued.

More than 30 witnesses, including Potter herself, took the stand during the trial's eight days of testimony. An emotional Potter testified for hours and broke down in tears several times as she described the "chaotic" moments that led up to the shooting.

"I was very distraught. I just shot somebody. I'm sorry it happened," she said, crying, in court. "I'm so sorry."

Under cross-examination, Potter said Wright had not threatened the officers before she fired. She said she did not remember much of what happened after the shooting but acknowledged she did not help treat Wright's injuries or check on her fellow officers.

Potter was far from a rogue officer. She testified that before that day she had never deployed her Taser or fired a handgun while on duty, and she had never had a complaint against her.

The fatal shooting -- just miles from where former Minneapolis police officer Derek Chauvin stood trial for killing George Floyd -- set off days of unrest in Brooklyn Center after a summer of coast-to-coast protests over how police treat people of color.

In her closing argument, Assistant Minnesota Attorney General Erin Eldridge said Potter made a series of bad choices during the traffic stop that led to the fatal mix-up.

"Accidents can still be crimes if they occur because of recklessness or culpable negligence," the prosecutor said. "It's not a defense to the crimes charged."

The defense has characterized the killing as an unfortunate accident that should not be considered a crime.

"Everybody makes mistakes, nobody's perfect," said attorney Earl Gray. "This lady made a mistake and a mistake is not a crime."

He also argued Potter was within her rights to use deadly force to protect a fellow officer, who was reaching into the vehicle when Wright attempted to drive away.

"Even though she didn't know she was using it, she had the right to, and that's what the law is," he said.