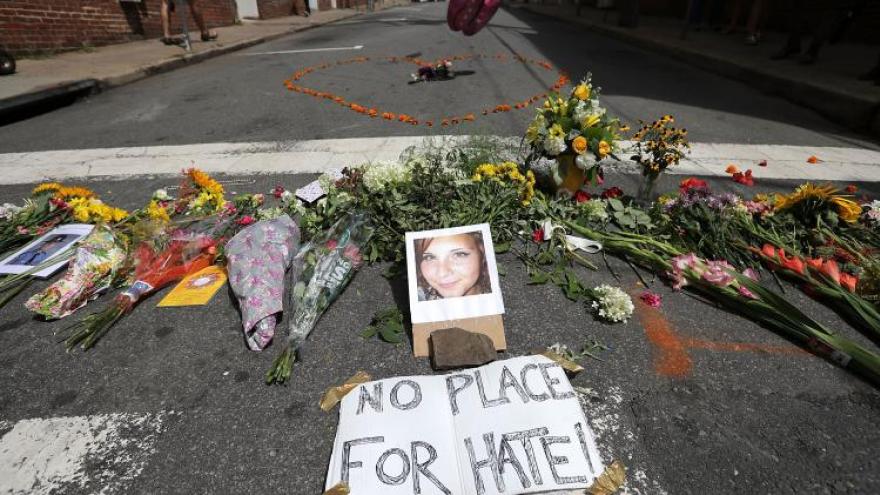 Flowers surround a photo of 32-year-old Heather Heyer, who was killed when a car plowed into a crowd of people protesting against the white supremacist Unite the Right rally, August 13, 2017 in Charlottesville, Virginia.

(CNN) -- A jury has awarded more than $26 million in damages after finding the White nationalists who organized and participated in a violent 2017 rally here liable on a state conspiracy claim and other claims.

But the jury in the federal civil trial said Tuesday it could not reach a verdict on two federal conspiracy claims.

The violence during the Unite the Right rally turned the Virginia city into another battleground in America's culture wars and highlighted growing polarization. It was also an event that empowered White supremacists and nationalists to demonstrate their beliefs in public rather than just online.

Though the jury deadlocked on the two federal conspiracy claims, it slammed the defendants on the other claims with major awards to the plaintiffs, who included town residents and counterprotesters injured in the violence four years ago.

Some of the most prominent figures of the alt-right -- Jason Kessler, Matthew Heimbach, Richard Spencer and Christopher Cantwell -- were among the defendants.

"We are thrilled that the jury has delivered a verdict in favor of our plaintiffs, finally giving them the justice they deserve after the horrific weekend of violence and intimidation in August 2017," plaintiffs' attorneys Roberta Kaplan and Karen Dunn said.

"Today's verdict sends a loud and clear message that facts matter, the law matters, and that the laws of this this country will not tolerate the use of violence to deprive racial and religious minorities of the basic right we all share to live as free and equal citizens."

One defense attorney called the verdict a win.

"It's a politically charged situation. It's going to be hard to get 11 people to agree," said attorney Joshua Smith, who represented three defendants. "I consider a hung jury to be a win, considering a disparity of resources."

The events surrounding August 11-12, 2017, saw White nationalists and supremacists marching through Charlottesville and the University of Virginia campus chanting, "Jews will not replace us," "You will not replace us" and "Blood and soil," a phrase evoking Nazi philosophy on ethnic identity.

The violence -- which enveloped the rally to protest the planned removal of a statue of Confederate Gen. Robert E. Lee -- reached a crescendo when James Alex Fields Jr., who was protesting the statue's removal, sped his car through a crowd of counterprotesters, injuring dozens and killing 32-year-old Heather Heyer.

Despite the large jury award, there's the question of whether the plaintiffs will see much of that money. Fields is serving multiple life sentences. Some of the other defendants -- individuals and White supremacist organizations -- have indicated they are financially stressed.

"The defendants in the case are destitute, none of them have any money," Smith said. "I don't know how any of the plaintiffs are going to get anything for any of this."

Attorneys for the plaintiffs said they intend to relitigate the two federal conspiracy charges.

"We intend to get a verdict on those counts in the future," Kaplan said.

Amy Spitalnick, executive director for Integrity First for America, the group that funded the suit, called the multimillion dollar decision a message.

"This verdict sends a very clear message that violent hate will not go unanswered," Spitalnick said. "There will be very serious consequences for the sort of extremist violence we saw here four years ago. And that's incredibly powerful, particularly at a moment when we know that extremism is on the rise, when democracy is under threat, and when there has been so little accountability."

A jury awarded the plaintiffs $11 million in punitive damages on a Virginia conspiracy claim. On that claim, each defendant is liable for $500,000 each. Five organizations are liable for $1 million each.

The jury only awarded $7 to the plaintiffs in compensatory damages on the civil conspiracy claim.

In general, compensatory damages compensate (or make whole) the injured party for their loss or injury. Punitive damages are considered punishment when the defendant's behavior is found to be particularly harmful, such as if the defendant intentionally engaged in willful misconduct.

For the claim that some defendants subjected plaintiffs to racial, religious or ethnic harassment, violence or vandalism, Kessler, Spencer, Cantwell, Elliott Kline and Robert "Azzmador" Ray were each found liable for punitive damages.

Plaintiffs Natalie Romero and Devin Willis were awarded $250,000 each in compensatory damages.

In the same claim, the jury also found Fields liable, but did not award any damages.

It also found Fields liable for $12 million in punitive damages total for claims of assault or battery and intentional infliction of emotional distress.

Fields didn't testify in the trial but was represented by an attorney.

A few criminal cases resulted from the events surrounding the rally -- including state and federal convictions of Fields, who is serving multiple life sentences for killing Heyer -- but there were no large-scale trials of organizers from the Justice Department under the Trump or Biden administrations.

The civil lawsuit in federal court sought to impose consequences on those who planned the rally and Fields for the people he injured or traumatized when he ran his Dodge Challenger into the crowd.

But even before the trial, the plaintiffs had won in some ways due to the national outrage over the violence. Richard Spencer stopped his public speaking tour and has called the case "financially crippling." Jeff Schoep and Heimbach renounced White supremacy and stopped organizing White power activity in public.

Schoep gave the group he led for more than two decades, the National Socialist Movement, to a Black civil rights activist who died shortly thereafter. Identity Evropa, one of the groups named in the suit, rebranded under a new name twice before disbanding.

CNN legal analyst Jeffrey Toobin said that even though the full verdict amounts likely won't be paid, the lawsuit will brings significant consequences. He compared the verdict with a decision in the 1980s in which a lawsuit by the Southern Poverty Law Center crippled the Ku Klux Klan.

Fourteen people and 10 White supremacist and nationalist organizations were originally named in the lawsuit that prompted the trial, but a few were not involved in the verdicts because they didn't show up for court and were the subjects of default judgments.

In closing arguments last week, attorneys representing the plaintiffs told the jury that the defendants prepared for the "Battle of Charlottesville" and messages sent between them and their actions after the violence were proof of a conspiracy.

Defense attorneys and Spence and Cantwell, represented themselves countered that none of the plaintiffs had proven the defendants had organized racial violence.

The case was Sines v. Kessler.