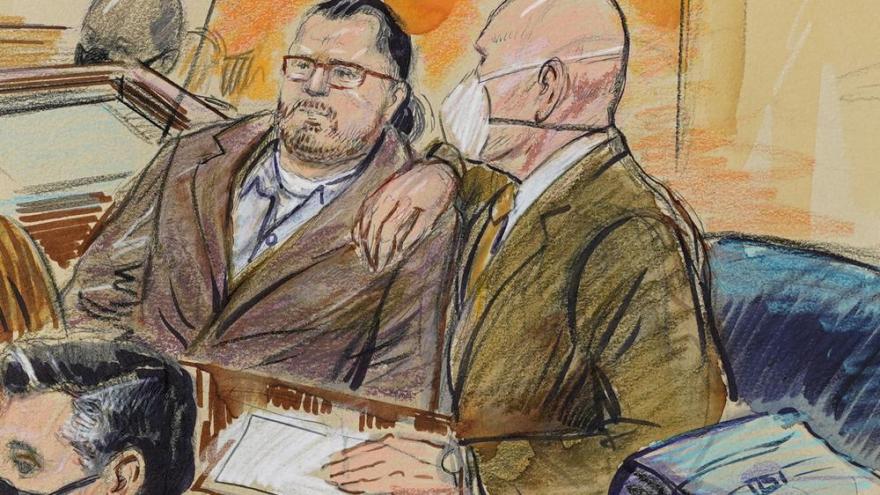 (CNN) -- A jury in Washington, DC, on Tuesday found January 6 rioter Guy Reffitt guilty of all five charges he faced related to the US Capitol attack, in the pivotal outcome of the first federal trial related to the riot.

Reffitt, a Texas Three Percenter and supporter of then-President Donald Trump when he went to the Capitol on January 6, was charged with five counts -- wanting to obstruct the congressional certification of the 2020 presidential election, transporting guns into DC, carrying a Smith & Wesson handgun onto the restricted grounds of the Capitol, interfering with Capitol Police protecting the Upper West Terrace and obstructing justice by threatening his son and daughter when he returned to Texas.

The jury of six men and six women in DC's federal court deliberated for just under four hours Tuesday.

Reffitt sat very still, then sipped water as the verdict was read. His wife, Nicole, who had watched each day of the trial with some of her children, did not make it into the courtroom in time to watch it being read.

The maximum sentence for the most severe of Reffitt's charges -- obstruction of Congress and obstruction of justice -- is 20 years in prison. He is scheduled to be sentenced on June 8.

The weeklong trial alternated between a painful reliving of the attack for Capitol Police witnesses, a civics lesson on Congress, and a family drama where a son testified against his father.

It was the first case related to January 6 to go to trial and tested the Justice Department's ability to tie one person's actions in the crowd to the broader attack on Capitol Hill.

Reffitt, 49, has been held in jail since his arrest in late January 2021. His case rose to national attention after his son, Jackson Reffitt, did major national TV interviews about turning his father in to the FBI after disagreeing with him about his Trump support and involvement in the Three Percenters.

The conviction could have a dramatic effect on the more than 500 Capitol riot defendants whose cases are still making their way through the justice system. It could encourage some defendants to accept plea deals instead of facing a jury, and also may prompt appeals of the criminal law being used in many of the January 6 prosecutions.

The US attorney for DC, Matthew Graves, thanked the jury members for their service.

"Today a jury in the District of Columbia held Guy Reffitt accountable for his actions on Jan. 6, 2021, finding him guilty of five felony charges," Graves, who leads the Justice Department office prosecuting all January 6 cases, said in a statement. "I would like to thank the jury for upholding the rule of law and for its diligent service in this case."

Nicole Reffitt told reporters outside the courthouse after the jury had convicted him that "this fight's just begun," and encouraged other January 6 defendants to follow her husband's choice to go to trial and not take plea deals from the government.

"Do not take a plea," she said. "They want us to take a plea. ... They are making a point out of Guy, and that is to intimidate the other members of the 1/6ers. And we will all fight together."

"The verdict today is against all American people," she added. "If you are going to be convicted on your First Amendment rights, all Americans should be wary."

Nicole Reffitt also criticized what she called the Justice Department's "disgusting ploy" of using testimony from her children, including her underage daughter, against their father. The daughter did not testify during the trial but spoke about her father's threats at two previous court proceedings.

Reffitt's defense lawyer called no witnesses and instead argued that he was an exaggerator, who took credit for bringing a gun to the Capitol and resisting police when he was a bit player in the scrum.

But building their case, prosecutors played on witnesses' emotional memories of the attack and Reffitt's own admissions in text messages and recordings.

Last Thursday, as his father cried across the courtroom, Jackson Reffitt testified that Guy Reffitt "snowballed into a far-right extremist" following the 2016 election of Trump. Guy Reffitt joined the Texas Three Percenters, Jackson said, and became increasingly hostile toward political figures, railing about then-Senate Majority Leader Mitch McConnell and House Speaker Nancy Pelosi, whom he thought were breaking the law.

Jackson Reffitt also told the jury about his father's comments after the riot, that should Jackson or his younger sister turn their father in, they would be traitors, and "traitors get shot."

Rocky Hardie, a former member of the Texas Three Percenters group who was given immunity by prosecutors in exchange for his testimony, told the jury about meeting Reffitt prior to the 2020 election.

"In life most people talk but they don't do," Hardie remembered thinking. Reffitt "seemed to be a person that actually does things."

Hardie testified that he and Reffitt both packed automatic rifles in their car and brought concealed handguns to the Capitol on January 6 for "self-defense." He said they both were aware bringing weapons to the Capitol was illegal, and Jackson Reffitt produced audio to the FBI that captured him discussing with his father laws against carrying a weapon on federal property.

The pair of Three Percenters also brought two-way radios and flex cuffs, "in case we need to detain anybody," Hardie said, while Reffitt wore an armored vest, a helmet and a blue jacket -- items that made him identifiable to police remembering the attack and in multiple video angles of the crowd pushing forward.

Three Capitol Police officers testified about battling Reffitt outside the Capitol. They all noted that Reffitt led the mob forward, taunting police officers that they "couldn't stop all of us." Even once officers had knocked Reffitt back with chemical spray on the Upper West Terrace, rioters behind him were disassembling scaffolding and cutting white tarp nearby, following Reffitt's lead, prosecutors argued. The crowd -- which included alleged members of the Proud Boys right-wing group and the infamous QAnon Shaman Jacob Chansley, who wore face paint and horns -- was ultimately able to break the police line at that part of the Capitol's exterior, opening the path for some rioters to break windows to enter the Senate side of the building.

Text messages and recordings, taken by his son, from after January 6 showed Reffitt recounting how police sprayed him with chemicals and how members of Congress "scurried like rats and hid" while the mob breached the building.

"I had every constitutional right to carry a weapon and take over Congress as we tried to do," Reffitt said to his family in one recording.

One of the officers who faced off against Reffitt, Sgt. Matthew Flood, told the jury he left the west side of the Capitol to help evacuate lawmakers still trapped on the Senate floor. By that point, rioters had cut off all but one escape route -- which they were able to use to rush lawmakers to safety.

"They were calling us traitors, saying that we were in their way, to get out of their way. They were saying that they supported us, and we were betraying them," Capitol Police officer Shauni Kerkhoff said. "It made me feel angry because it's our job to stand in the way."