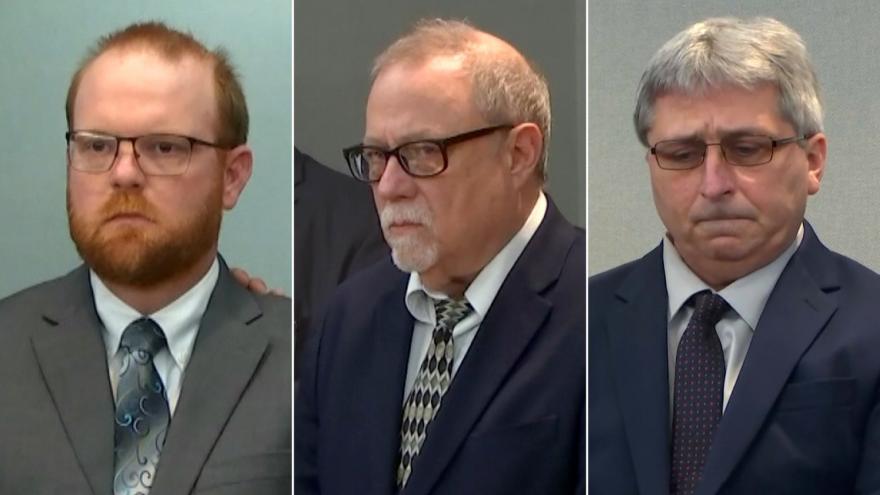 A jury has found the three White men who killed Ahmaud Arbery guilty on a federal hate crime charge, backing prosecutors' case that the men chased the 25-year-old through the streets of the Satilla Shores neighborhood, because he was Black.

Travis McMichael, Gregory McMichael and William "Roddie" Bryan were all found guilty of one count of interference of rights, a federal hate crime charge.

They could now receive up to life in prison for the federal convictions.

A verdict has been reached in the federal hate crimes trial of Ahmaud Arbery's killers, a judge announced Tuesday morning.

The verdict -- coming after more than three hours of deliberations Monday and Tuesday -- is expected to be read around 10:30 a.m. ET in federal court in Brunswick, Georgia.

Travis McMichael, his father Gregory McMichael and neighbor William "Roddie" Bryan were previously given life sentences after being convicted in a state court in November of felony murder and other charges for the killing of Arbery, a Black man, after they chased him in a neighborhood outside Brunswick in February 2020.

In the current federal trial, the three men are each charged with interference with rights -- a hate crime -- and attempted kidnapping, with prosecutors trying to prove they acted out of racial animus. The McMichaels also face charges related to the use of firearms during a violent crime.

During closing rebuttal arguments on Monday, prosecutor Tara Lyons emphasized the state's position that Arbery was killed two years ago because he was Black.

"On February 23, 2020, the three defendants did not see 25-year-old Ahmaud Arbery as a fellow human being," Lyons said in federal court in Brunswick.

From the start of the trial, prosecutors have homed in on testimony detailing how all three defendants spoke privately and publicly about Black people using inflammatory and derogatory language, including racial slurs.

Defense attorneys have not denied the use of such language -- yet argued the facts of the case show their response to Arbery was not due to his race.

Federal prosecutors and Arbery's family have said he was out for a jog when he was killed. Defense attorneys in both trials contended the McMichaels, suspecting Arbery of trespassing multiple times at an under-construction home, pursued him in a pickup truck through neighborhood streets to stop him for police. Travis McMichael argued he shot Arbery in self-defense as they wrestled over McMichael's shotgun.

Bryan joined the pursuit in his own truck after seeing the McMichaels follow a running Arbery in their pickup, and recorded video of the shooting.

Prosecutors at both trials conceded Arbery was at the construction site several times including the day of the shooting, but always without breaking in or taking anything, and never doing anything that would allow the men to pursue or stop him. They argued that White people visited the site apparently without being chased, and that the pursuers did not actually see Arbery at the site that day and had no knowledge he'd committed a crime.

The three men were tried in a Georgia court and found guilty of multiple murder counts in November. The McMichaels were sentenced to life in prison without parole, while Bryan was given life with the possibility of parole.

Before the federal trial, the McMichaels initially agreed to plead guilty, but the judge overseeing the case rejected the plea deal because of concerns about the sentence. The three men have since pleaded not guilty.

The jury is made up of eight White jurors, three Black jurors and one Hispanic juror, according to details provided in court. Three White people and one Pacific Islander have also been selected as alternates.

Prosecutor Christopher J. Perras spoke at the start of the prosecution's closing arguments Monday by going through some of the evidence presented during trial, including Facebook posts made by Greg McMichael, texts and posts by Travis McMichael, and Bryan's use of a derogatory phrase in messages to friends.

In one example, under a Facebook video appearing to show a group of primarily Black teenagers beating a White teen, Travis McMichael commented, "I say shoot them all," and referred to the group as "monkeys," according to testimony from an FBI intelligence analyst.

Perras said the three pursued Arbery in a fit of vigilantism -- and they did it because they saw "a Black man in their neighborhood and assumed the worst of him."

Perras argued the defendants, after Arbery's killing, falsely told police Arbery had been caught breaking into houses. That was part of a pattern, Perras said, showing the defendants knew what they had done wrong and were trying to get away with it. The men were not charged until more than two months after the shooting.

Perras argued Bryan's pursuit of Arbery -- after seeing Arbery running from the McMichaels' truck -- was based on race, citing testimony that Bryan didn't know precisely what was happening or asked what the pursuit was about.

"He didn't ask Ahmaud, 'Are you OK.' ... (He assumed) the Black man was in the wrong and the White guys were in the right. ... That's how hard-wired his racial assumptions were," Perras said.

Defense attorneys on behalf of each of the three men also spoke Monday in closing remarks, pushing back against prosecutors' arguments.

J. Pete Theodocion, a defense attorney for Bryan, countered that Arbery never asked for help, and said Bryan would have joined the pursuit regardless of Arbery's race. What Bryan saw was two people -- in a truck he recognized from the neighborhood -- asking Arbery to stop, and Arbery wasn't stopping.

"It was entirely reasonable" to assume the person being chased did something wrong, Theodocion said. Bryan "absolutely" had "enough evidence" to follow in his own vehicle at a slow speed and record video, the lawyer said.

Amy Copeland, a defense attorney for Travis McMichael, said there is no evidence her client used a racial slur on the day Arbery was murdered, no evidence he was part of a hate group, no evidence of racial violence committed by McMichael and no evidence he talked about Arbery's death in racial terms.

The defense attorney for Greg McMichael, attorney A.J. Balbo, told the jury his client had tenants who were people of color.

Arbery's mother, Wanda Cooper-Jones, was seen overcome with emotion in the courtroom during the defense's closing arguments, including when Balbo detailed the moments leading up to the fatal attack.

"He described Ahmaud as turning toward Travis and attacking Travis, which we all know now that wasn't true," she told reporters outside the courthouse during Monday's lunch break. "When Ahmaud turned to Travis, Travis already had that shotgun pulled toward him."

The timing of the closing of the trial is "great," Cooper-Jones said, as it nears the two-year anniversary of Arbery's death. "The anniversary date is the 23rd, and hopefully we'll have a good verdict by the 23rd," she said.

After recounting what Balbo claimed about her son, she said, "this has been very draining, and I'm thankful that it's almost over."

The defense argued at the state murder trial that the pursuit began when the elder McMichael saw Arbery running from the direction of the under-construction home, and that he believed he matched the description of someone who had been recorded there previously -- and of someone Travis McMichael had encountered and called police about 12 nights earlier.

Unbeknownst to the McMichaels on the day of the shooting, a neighbor had just called police to report that Arbery was at the construction site alone, and that Arbery ran as the neighbor called, according to testimony.

The prosecution in the murder trial conceded surveillance videos did show Arbery at the construction site multiple times, including the day he was killed, but always without taking anything.

In closing arguments Monday, Perras said Arbery's reason for being there was irrelevant to the legality of the defendants' pursuit of him, and stressed the property owner's testimony that nothing was taken. "Maybe Ahmaud was interested in seeing the progress ... (or) to clear his mind ... to get away from it all. ... We'll never know for sure" because he was killed, Perras said.