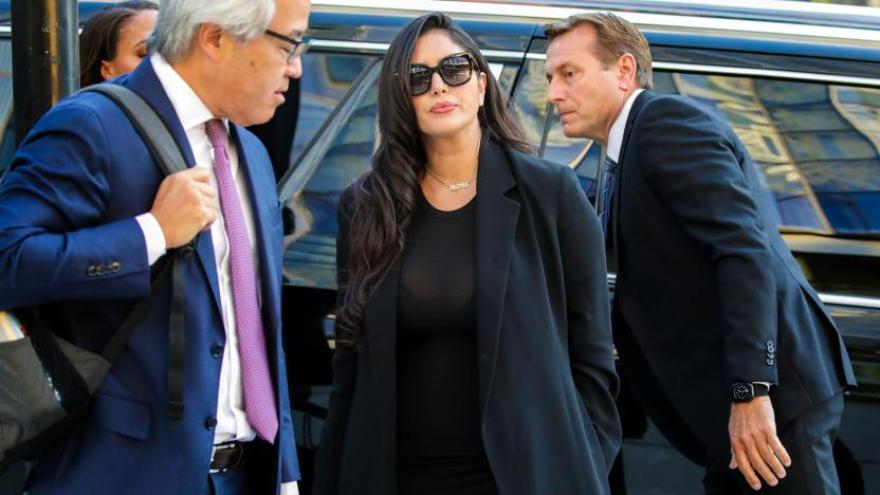 Vanessa Bryant arrives at court on Friday, August 19, in the trial over graphic photos taken of her husband Kobe Bryant and others.

(CNN) -- A federal jury awarded $31 million in damages to Kobe Bryant's widow and her co-plaintiff on Thursday after finding the Los Angeles County Sheriff's and Fire departments liable for infringing on their constitutional rights for taking and sharing gruesome photos of the January 2020 helicopter crash that left nine people dead.

The verdict stems from photos taken by LA County deputies and firefighters in the immediate aftermath of the crash that killed Kobe Bryant, the legendary Los Angeles Lakers player, his daughter Gianna, Chester's wife, Sarah, his daughter Payton and five others. The National Transportation Safety Board determined the helicopter pilot pushed the limits of bad weather flying rules before he crashed into a hillside in Calabasas, California.

The photos included not just wreckage of the helicopter but close-up images of the mangled bodies of those killed.

Bryant and Chester argued that the photos of their loved ones caused emotional distress and violated their privacy. Each testified to living in fear the photos may surface, despite the county's assertion the pictures had been destroyed.

Jurors listened to 11 days worth of graphic and emotional testimony. Witnesses during the trial included a deputy who said he showed images from the scene to two people at a bar; another deputy who said he shared photos while playing a video game; a deputy who air-dropped scene photos to an unidentified person in firefighting gear; a fire captain who took similar photos but turned in a department device missing its hard drive; and a fire official who showed the images to other personnel during an awards ceremony cocktail hour.

The federal jury found both the Sheriff's and Fire Departments lacked proper policies and training which caused the violation of rights. The only plaintiff claim not supported by jurors was in a finding that the county fire department was not liable for any long-standing widespread practice or custom of taking illicit photos. The sheriff's department was found liable for the same issue.

Immediately after the verdict was read, Bryant hugged her attorneys. As she continued to cry, Bryant then tearfully embraced her daughter Natalia in the front row. She left the courthouse without making a statement, but did post a picture of her, Kobe Bryant and their daughter Gianna on Instagram with the caption: "All for you! I love you! JUSTICE for Kobe and Gigi!"

"This case has always been about accountability," her attorney Luis Li said in a statement. "And now the jury has unanimously spoken."

Attorney Mira Hashmall, who led outside counsel for LA County, released a statement shortly after the verdict.

"While we disagree with the jury's findings as to the County's liability, we believe the monetary award shows that jurors didn't believe the evidence supported the Plaintiffs' request of $75 million for emotional distress," Hashmall said. "We will be discussing next steps with our client. Meanwhile, we hope the Bryant and Chester families continue to heal from their tragic loss."

In September 2020, California Gov. Gavin Newsom signed an invasion-of-privacy bill called the "Kobe Bryant Act" that makes it illegal for first responders to share photos of a dead person at a crime scene "for any purpose other than an official law enforcement purpose." The misdemeanor crime is punishable by up to $1,000 per violation.

Coincidentally, the decision was announced on "Kobe Bryant Day," or August 24, which was created by Los Angeles in 2016 and Orange County in 2020 to honor the Lakers star's two jersey numbers, 8 and 24. The Lakers have retired both numbers.

Bryant intends to use proceeds from the victory for her non-profit dedicated to Kobe and Gianna, the Mamba and Mambacita Foundation, to "shine a light" on their legacy, Li said in a statement.

"It is Mrs. Bryant's hope that this important civil rights case will put to a stop this abhorrent and callous behavior," he said.

Deliberations began Wednesday shortly after an attorney for Los Angeles County argued that the trial is a "pictures case with no pictures," noting that the gruesome photos of human remains have never actually been seen by the public -- or even the plaintiffs.

"No pictures is good. No pictures means no public dissemination ... no risk of other people making mistakes," Hashmall, the county attorney, said in closing arguments of the trial.

In an emotional rebuttal, Li argued Wednesday the actions of the county in taking such photos were reckless and inhumane and caused emotional distress.

"They poured salt into an unhealable wound and that's why we're all here today," he said.

Hashmall argued the county's actions to delete the photos resulted in them never being distributed publicly, and she argued further that first responders taking photos did not violate Bryant's rights.

She urged the jury to consider the law, which only allows for a verdict against the county if it can be proven county policies were deficient enough to prevent the spread of the photos or if there is a longstanding custom of such behavior within the sheriff and fire departments.

"If the county didn't take (the photo sharing) seriously, why is this whole case based on the county's investigation?" she said.

Jurors also wrestled with what constitutes "the public" in this case. The plaintiffs argued any deputy without an investigatory reason to have the photos should be considered the public. One of the deputies shared photos containing human remains with another deputy as they were playing the video game "Call of Duty," and another showed them to a bar patron and a bartender he considered a friend.

Hashmall agreed that was wrong, but asked the jury to consider whether it "shocked the conscience," a legal threshold the jury must consider in rendering its verdict.

"Does it shock the conscience that he needed to talk?" Hashmall asked. She also noted that the deputy was disciplined for his actions. "That's not a constitutional issue, that's a county issue," she said.

In their rebuttal, Bryant's attorneys argued the photos could still exist because one of the deputies AirDropped them to a firefighter that hasn't been identified. They also argued the county inadequately investigated the incident, which has allowed for photos of human remains to potentially surface.

The rebuttal evoked tears from Vanessa Bryant and Lakers general manager Rob Pelinka in the courtroom. Li, Bryant's attorney, said the jury's decision is "important to families throughout the United States who might suffer a tragedy someday."

Referring to testimony given by veteran law enforcement officials including Sheriff Alex Villanueva, Li reminded the jury of a practice of first responders keeping "death books" since the Polaroid was around. Li said to the jury: "This has been going on for decades. Make it stop."

Bryant cried audibly and grabbed tissues when Li stated that photos of family members' bodies torn apart are private and should not be shared with deputies just "because they're wearing a badge the next morning, to offer [the photos] to their wife."

In describing how deputies had to have gone out of their way to find Gianna Bryant's remains in a ravine to photograph her, Li asked, "Does that shock the conscience?"

Li said while there is no jury form to check a box for better training, better policies, or more discipline, there is only a box jurors can check for damages: "Whatever you put in that box will serve to shine a light on the legacy of Kobe and Gianna Bryant."

Li concluded by applauding the two whistleblowers, one of whom sat in the courtroom. Li was emotional as he said: "But for those people, we may never have heard of this....There's another group of people who saw something terribly wrong. You...Your turn to stand up and deliver accountability."