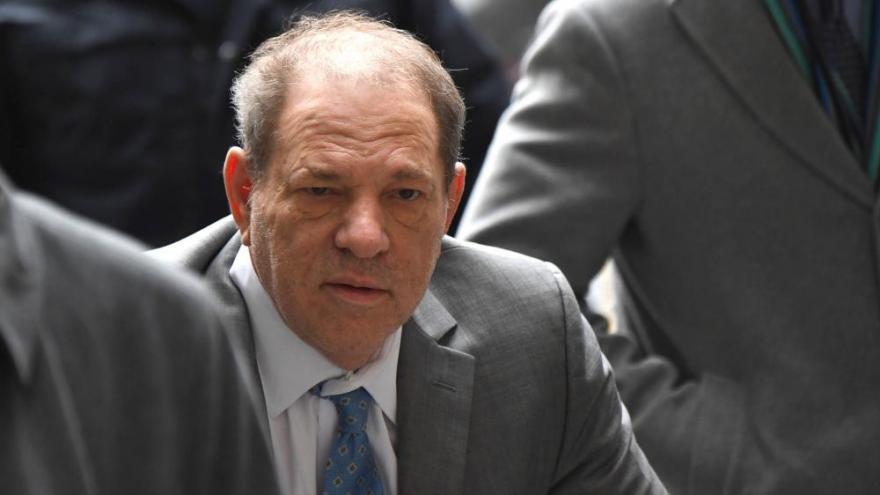 Harvey Weinstein, seen here arriving to court on February 18, 2020 in New York City, was found guilty of a criminal sex act and rape.

(CNN) -- The guilty verdict in Harvey Weinstein's sexual assault and rape case is being hailed as a turning point in the #MeToo movement but his attorneys say he never had a chance at a fair trial.

The disgraced movie mogul was convicted of committing a criminal sex act in the first degree involving one woman and rape in the third degree involving another. He was acquitted of the more serious charges of predatory sexual assault involving the two women and one count of first-degree rape.

"This is a big day. This is a new day," Manhattan District Attorney Cyrus Vance Jr. said. "This is the new landscape for survivors of sexual assault in America, I believe, and this is a new day. It is a new day because Harvey Weinstein has finally been held accountable for crimes he committed."

Weinstein faces a minimum of five years and a maximum of more than two decades in prison. He was handcuffed and taken into custody after the New York jury's verdict.

On Monday night, Weinstein was taken to New York's Bellevue Hospital after he began feeling chest pains and having heart palpitations and high blood pressure, his attorney, Donna Rotunno, said.

The ex-Hollywood producer's attorney told CNN's Jean Casarez she was troubled by the result.

"I saw (Vance's statement) and I think that it's frightening to think about a new dawn in the criminal justice system that doesn't have changes," Rotunno told Casarez. Rotunno added that the justice system relies on the rights of citizens to due process and the presumption of innocence.

"And if this notion is to just start believing people just because they make claims, I think that challenges the criminal justice system as we know it and I think for anybody charged in these types of crimes, that's a scary proposition," she said.

Women came forward in stories by The New Yorker and The New York Times with allegations against Weinstein. Actress Alyssa Milano asked Twitter users to tell their stories and use the #MeToo hashtag.

The #MeToo movement was founded in 2006 by activist and writer Tarana Burke.

Burke tweeted Monday that Weinstein's convictions would not have been possible "without the voices of the silence breakers in and outside the courtroom" and the "survivors who courageously testified" against him.

In doing so, jurors indicated they did not find beyond a reasonable doubt that Weinstein had also raped actress Annabella Sciorra, another alleged victim whose testimony prosecutors used in an attempt to establish Weinstein's predatory behavior.

"My testimony was painful but necessary," Sciorra said Monday in a statement to CNN. "I spoke for myself and with the strength of the eighty plus victims of Harvey Weinstein in my heart. While we hope for continued righteous outcomes that bring absolute justice, we can never regret breaking the silence. For in speaking truth to power we pave the way for a more just culture, free of the scourge of violence against women."

Jurors deliberated for more than 26 hours over five days before reaching a verdict Monday morning. A motion for a mistrial by the defense earlier Monday was denied.

When the verdict was read, jurors did not appear to look at Weinstein and may have been avoiding making eye contact with anyone.

Sentencing is scheduled for March 11.

For the charge of criminal sex act in the first degree, he faces a minimum of five years and a maximum of 25 years in prison.

For the charge of rape in the third degree, he essentially faces no minimum prison time and a maximum of four years.

Actress Ashley Judd, who accused Weinstein of sexual harassment, lauded the women at the center of the New York case.

"For the women who testified in this case, and walked through traumatic hell, you did a public service to girls and women everywhere, thank you," Judd tweeted.

But Weinstein's criminal cases aren't over. He also faces charges of sexual assault and rape in separate incidents in Los Angeles.

Weinstein has denied allegations of non-consensual sexual activity related to the other women.

How the case unfolded

Four other women, including Sciorra, also testified that Weinstein sexually attacked them as prosecutors sought to show that he used his power in the movie industry to prey on young, inexperienced women.

Sciorra's testimony that he raped her in the winter of 1993-1994 is outside of the statute of limitations but could have been used to support the predatory sexual assault charges, which requires serious sex crimes against at least two victims.

Weinstein's attorneys argued that the sexual encounters were consensual. As evidence, they pointed out that both Haley and Mann had sex with Weinstein after the alleged attacks, and they continued to have friendly contact with him for years afterward.

They said they will appeal the jury's finding.

"While he was not convicted on the most serious charges, we are disappointed in the verdict and will be filing an appeal," said a statement on behalf of Rotunno and Damon Cheronis. "There are issues in this trial that were extremely troubling, and they prejudiced Mr. Weinstein's ability to have his case fairly judged. These will be addressed to a higher court."

Rotunno told CNN she didn't think it was possible for Weinstein to ever get a fair trial.

The attorneys also said they are working on assuring that Weinstein is brought to an infirmary and placed in protective custody at Rikers "so that he can get the best medical supervision and care possible."

The verdict 'marks a new era of justice'

The women's testimonies highlighted questions about consent and power dynamics -- questions that rarely, if ever, have been tested in a courtroom.

Tina Tchen, president and CEO of the Time's Up Foundation, said the verdict marks an important turning point.

"This trial -- and the jury's decision today -- marks a new era of justice, not just for the Silence Breakers, who spoke out at great personal risk, but for all survivors of harassment, abuse, and assault at work," Tchen said in a statement.

Debra Katz, an attorney for Dawn Dunning, who testified against Weinstein, said Monday afternoon that Weinstein belongs in prison.

"Harvey Weinstein has hurt dozens and dozens of people by his sexual predatory rapist violent behavior, and today there can be no other discussion other than Harvey Weinstein is exactly where he should be," Katz said.

Douglas Wigdor, attorney for Tarale Wulff, who also testified against Weinstein at the trial, said that while Monday's verdict was significant, Weinstein's behavior has done damage to his client and others.

"While he's been convicted, we can't undo the harm that he's caused to so many victims. Today will be some load of relief for all of the assault survivors," he said.