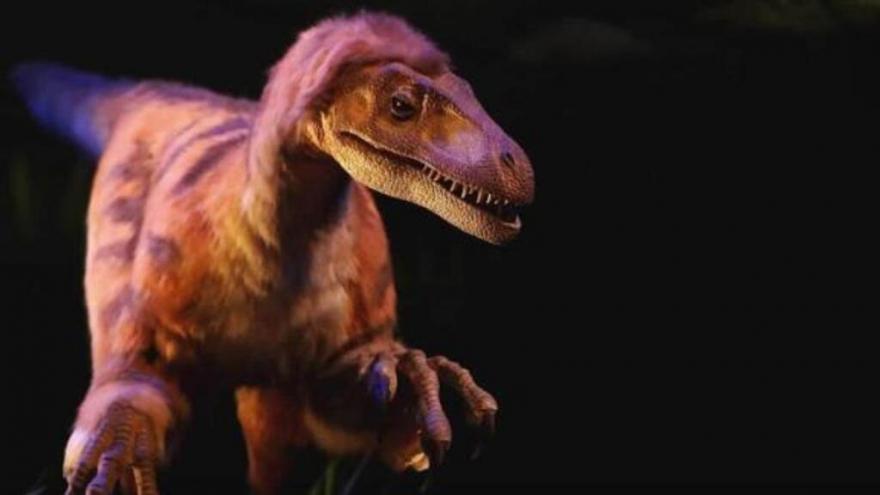 (CNN) -- The fearsome raptors that terrorized visitors to "Jurassic Park" may not have hunted in packs, like they did on screen.

That's the finding of a new study that analyzed teeth from Deinonychus antirrhopus, wolf-sized raptors that lived in what is now North America during the Cretaceous Period more than 100 million years ago.

In the blockbuster 1993 movie, raptors were portrayed as highly intelligent predators that worked together to stalk their prey -- including one famously "clever girl" that outsmarted a veteran hunter.

That idea is based on real science, study author Joseph Frederickson told CNN. He said fossils found in the 1960s included multiple Deinonychus antirrhopus around the remains of larger, plant-eating dinosaurs that were too big for a single raptor to bring down.

But the raptors' closest living relatives, birds and so-called crocodilia -- alligators, crocodiles and their kin -- don't tend to hunt in packs.

The findings will be published in a forthcoming issue of the peer-reviewed journal Palaeogeography, Palaeoclimatology, Palaeoecology, and are already available online.

"They might live in groups, and they might all attack the same thing at once, or take turns, but they're not really using coordinated strategies, like we see it in, you know, African wild dogs or something like that," said Frederickson, a paleontologist who directs the Weiss Earth Science Museum at the University of Wisconsin Oshkosh.

"It's really hard to understand the behavior of an animal that went extinct 108 million years ago by just looking at the fossils," Frederickson told CNN.

Fredrickson and his colleagues Michael Engel and Richard Cifell at the University of Oklahoma hypothesized that the diet of young and adult Deinonychus could help indicate if the raptors hunted in packs.

They studied the chemical makeup of adult and baby Deinonychus teeth found in Oklahoma and in Montana to look for differences in their diets.

The baby dinosaur teeth had higher levels of the element carbon-13, Frederickson said, which suggested that they ate things like lizards and other small meat-eaters. Adults teeth had lower levels of carbon-13 because their diet was mostly plant-eating dinosaurs.

He said this pattern was similar to what they saw in crocodilia and suggests that they may have worked together, but they probably weren't pack hunters like wolves.

"Behavior is complex," he said. "It's not as simple as they do one thing, or they don't do the other, but there is this level that of pack hunting that mammals do that we just don't know if dinosaurs were capable of [doing]."

Steven Jasinski, curator of paleontology at the State Museum of Pennsylvania, said the findings, while interesting, don't prove that raptors didn't hunt in packs. Jasinski was one of the scientists that identified, Dineobellator notohesperus, a cheetah-like raptor that lived about 67 million years ago. That animal had scars on its bones from injuries that had healed before it died.

He said different species of modern mammals behave differently, so it makes sense that different raptors might, too. Lions live in big prides, for example, while other cats hunt alone, he said.

"I would venture to be on the side of things that there's a lot of variation among the behavior of these animals, and even if Deinonychus was not a pack hunter, that doesn't necessarily mean none of the others were," Jasinski told CNN.

He said the study shows that young Deinonychus probably grew up separately from adults, but that doesn't mean that they didn't rejoin the adults when they get older.

"It's possible that they became completely solitary and just kind of came together when resources and food was available. It's also possible that adults came back together to pack hunt later on," he said. "So it definitely gives us some information, but I don't think it completely negates that concept."

Frederickson said that his findings add a new wrinkle to scientists' understanding of raptors, but agrees that it doesn't settle the debate.