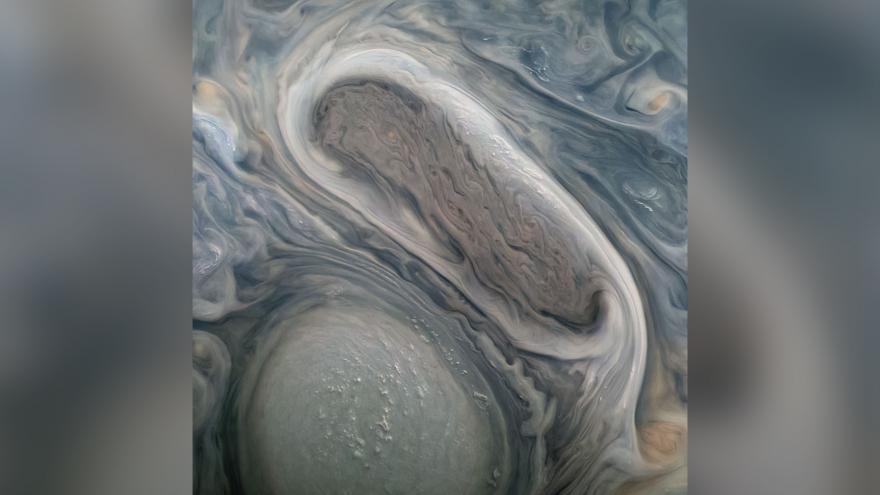 (CNN) -- The largest planet in our solar system appears to look more and more like a work of art. It's full of surprises -- and so are its moons.

The NASA Juno mission, which began orbiting Jupiter in July 2016, just recently made its 38th close flyby of the gas giant. The mission was extended earlier this year, adding on a flyby of Jupiter's moon Ganymede in June.

The data and images from these flybys is rewriting everything we know about Jupiter, said Scott Bolton, Juno principal investigator at the Southwest Research Institute in San Antonio, during a briefing at the American Geophysical Union Fall Meeting in New Orleans on Friday.

There, Bolton revealed 50 seconds of sound created when Juno flew by Ganymede over the summer. The clip of the moon's audio was created by electric and magnetic radio waves produced by the planet's magnetic field and picked up by the spacecraft's Waves instrument, designed to detect these waves. The sounds are like a trippy space age soundtrack.

"This soundtrack is just wild enough to make you feel as if you were riding along as Juno sails past Ganymede for the first time in more than two decades," Bolton said. "If you listen closely, you can hear the abrupt change to higher frequencies around the midpoint of the recording, which represents entry into a different region in Ganymede's magnetosphere."

"It is possible the change in the frequency shortly after closest approach is due to passing from the nightside to the dayside of Ganymede," said William Kurth, lead co-investigator of the Waves instrument, who is based at the University of Iowa in Iowa City, in a statement.

"You can see how incredibly beautiful Jupiter is," Bolton said. "It's really an artist's palette. This is almost like a Van Gogh painting. You see these incredible vortices and swirling clouds of different colors."

These visually stunningimages serve tohelp scientists better understand Jupiter and its many mysteries. Images of cyclones at Jupiter's poles intrigued Lia Siegelman, a scientist working with the Juno team who typically studies Earth's oceans. She saw similarities between Jupiter's atmospheric dynamics and vortices in Earth's oceans.

"When I saw the richness of the turbulence around the Jovian cyclones, with all the filaments and smaller eddies, it reminded me of the turbulence you see in the ocean around eddies," said Siegelman, a physical oceanographer and postdoctoral fellow at Scripps Institution of Oceanography at the University of California, San Diego, in a statement.

"These are especially evident in high-resolution satellite images of vortices in Earth's oceans that are revealed by plankton blooms that act as tracers of the flow."

Data from Juno is also helping scientists to map Jupiter's magnetic field, including the Great Blue Spot. This region is a magnetic anomaly located at Jupiter's equator -- not to be confused with the Great Red Spot, a centuries-long atmospheric storm south of the equator.

Since Juno's arrival at Jupiter, the team has witnessed a change in Jupiter's magnetic field. The Great Blue Spot is moving eastward about 2 inches (5.1 centimeters)per second and will complete a lap around the planet in 350 years.

Meanwhile, the Great Red Spot is moving westward and will cross that finish line much quicker, in about 4.5 years.

But the Great Blue Spot is being pulled apart by Jupiter's jet streams, which give it a striped appearance. This visual pattern tells scientists that these winds extend down much deeper into the planet's gaseous interior.

The map of Jupiter's magnetic field, generated by Juno data, also revealed that the planet's dynamo action, which creates the magnetic field from Jupiter's interior, originates from metallic hydrogen beneath a layer of "helium rain."

Juno was also able to take a look at the very faint ring of dust around Jupiter from inside the ring. This dust is actually created by two of the planet's small moons, named Metis and Adrastea. The observations allowed the researchers to see part of the Perseus constellation from a different planetary perspective.

"It is breathtaking that we can gaze at these familiar constellations from a spacecraft a half-billion miles away," said Heidi Becker, lead co-investigator of Juno's Stellar Reference Unit instrument at NASA's Jet Propulsion Laboratory in Pasadena, California, in a statement.

"But everything looks pretty much the same as when we appreciate them from our backyards here on Earth. It's an awe-inspiring reminder of how small we are and how much there is left to explore."

In the fall of 2022, Jupiter will fly by Jupiter's moon Europa, which will be visited by its own mission, the Europa Clipper, set to launch in 2024. Europa intrigues scientists because a global ocean is located beneath its ice shell. Occasionally, plumes eject from holes in the ice out into space. Europa Clipper could investigate this ocean by "tasting" and flying through the plumes -- and learn if life is possible on this ocean world.