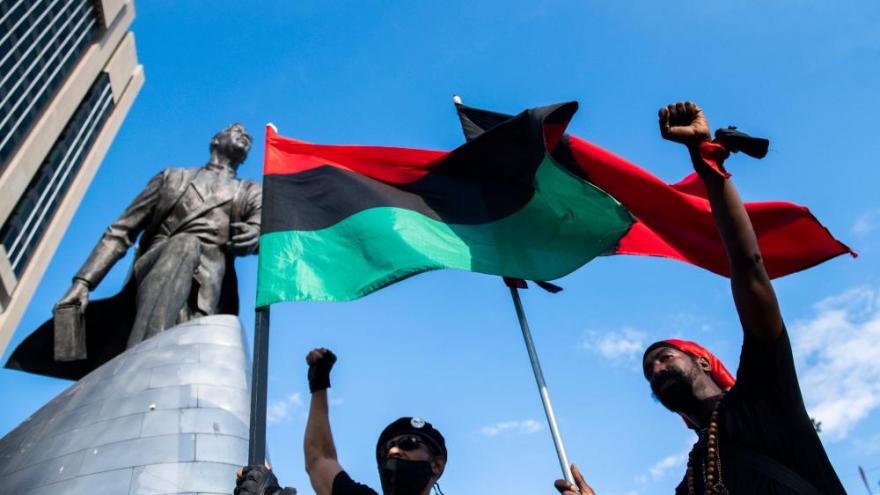 (CNN) -- For much of US history, Juneteenth has been a date observed mostly by Black Americans commemorating the symbolic end of slavery.

Since the reckoning reignited by the killing of George Floyd last year, though, the tide has changed enormously.

All but one state, as well as the District of Columbia, recognize the milestone of Black liberation in some form or another. Numerous companies mark the occasion by giving their employees the day off.

And on Thursday, President Joe Biden signed into law legislation that would establish June 19 as Juneteenth National Independence Day.

This makes Juneteenth the first federal holiday approved since Martin Luther King Jr. Day was established in 1983. Getting to this point took longstanding pushes by activists, several legislative attempts and the momentum generated by the Black Lives Matter movement last year.

Here's how the fight to recognize Juneteenth evolved over the years.

Juneteenth commemorates the moment in 1865 when news of emancipation reached the enslaved people of Galveston, Texas.

Though the day has often been omitted in history books and overlooked by non-Black Americans, activists and leaders had been pushing for decades to gain greater national recognition for it.

After taking a backseat during the 1960s Civil Rights Movement, Juneteenth made a resurgence in the '80s and '90s in communities across the country, with Texas becoming the first state to establish it as a holiday in 1980.

In 1994, leaders from around the nation gathered at Christian Unity Baptist Church in New Orleans to advocate for even greater acknowledgment of June 19's significance. That meeting would spawn a number of organizations and causes dedicated to commemorating and honoring Juneteenth, including the National Juneteenth Observance Foundation.

In 2000, the group's founder and chairman Rev. Ronald Myers began a campaign to make it a national day of observance and for all 50 states and US territories to recognize it as a state holiday or observance.

Others, like Opal Lee, fought for Juneteenth's recognition in less traditional ways.

In 2016, then 89-year-old Lee set out on foot from her home in Fort Worth, Texas, with the goal of reaching the nation's capital. Determined to see Juneteenth become a national holiday, she hoped that "surely somebody would notice a little old lady in tennis shoes."

The "grandmother of Juneteenth" continued to push for the effort with an annual 2.5-mile walk in her hometown, symbolizing the two-and-a-half years it took for word of the 1863 Emancipation Proclamation to reach enslaved people in Texas.

Congress has, in various years, passed resolutions honoring Juneteenth, but it wasn't until last year that lawmakers considered making it a national holiday.

At the height of the antiracism protests of last year, Texas Rep. Sheila Jackson Lee and Massachusetts Sen. Edward Markey, both Democrats, introduced bills in their respective chambers to make Juneteenth a federal holiday.

Despite broad bipartisan support, however, their effort was unsuccessful, with Republican Sen. Ron Johnson of Wisconsin blocking the measure on the grounds that giving workers another day of paid leave would cost too much.

This week, Johnson announced he would no longer block the bill from advancing. The Senate unanimously passed the resolution on Tuesday, the House approved the measure Wednesday and Biden signed it into law on Thursday.

"For far too long, the story of our country's history has been incomplete as we have failed to acknowledge, address, and come to grips with our nation's original sin of slavery," Markey said in a statement on Tuesday.

"Today's Senate passage of our legislation to commemorate Juneteenth as a federal holiday will address this long-ignored gap in our history, recognize the wrong that was done, acknowledge the pain and suffering of generations of slaves and their descendants, and finally celebrate their freedom."

Others say more needs to be done

At a time when Black Americans are facing systemic challenges such as the racial wealth gap, disproportionate incarceration and persistent health disparities, making Juneteenth a national holiday may seem like a small gesture.

Amara Enyia, policy research coordinator for the Movement for Black Lives, cautions that making Juneteenth a federal holiday shouldn't be seen as a substitute for substantive action.

"What people are really looking for is beyond symbolic acknowledgment is tangible policies from the federal government that actually speak to whether or not they acknowledge this country's history and its present," she said.

Still, some activists say that even that small gesture is an important first step.

Nsé Ufot, community activist and CEO of the New Georgia Project, sees a federal acknowledgment of Juneteenth as "part of a larger effort for truth and reconciliation."

"I see it as a part of a larger strategic push and a larger cultural push to not allow our memories to atrophy, to make sure that we don't repeat the mistakes of the past, and that there's actually a plan to repair the harm that has been visited by a significant portion of the American citizenry," she told CNN.