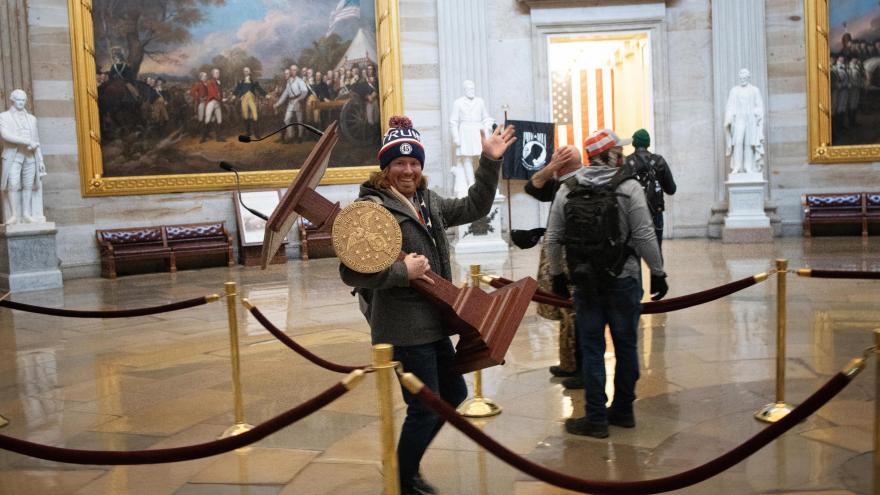 (CNN) -- The man photographed carrying House Speaker Nancy Pelosi's lectern during the January 6 riot was sentenced to 75 days in jail Friday after the judge warned about political divisions in the US, pointing to Russia's invasion of Ukraine as a cautionary example.

"We're on a dangerous slide in America," Judge Reggie Walton said during the sentencing of Adam Johnson, "when one side of our country, when the other side wins, rather than accepting it as the American way, believes that they can do whatever to get who they want in power sitting in the White House.

"That's what we see in countries like what we're experiencing now in Ukraine," Walton added. "That's where we're heading if we don't do something about it."

Walton has previously expressed concern about the future of the US political landscape, telling another defendant earlier this week that he had been reading several books on the formation of civil wars and was concerned that history could repeat itself.

Walton suggested on Friday the defendant read two of those books -- "How Civil Wars Start" and "The Next Civil War" -- and wondered whether there was "anything we as judges can do to stem this hostile environment, this partisan environment, that is ripping America apart."

Johnson, of Florida, will also pay a $5,000 fine. He pleaded guilty in November to entering and remaining in a restricted area, a misdemeanor.

During the riot on January 6, 2021, Johnson carried Pelosi's lectern to the middle of the Rotunda and pretended to make a speech, according to prosecutors, smiling and waving for pictures in one of the most enduring images of US Capitol attack, and saying he was "finally famous" in text messages in the days following the riot.

Prosecutors also showed video of Johnson following signs to Pelosi's office and "jiggling the door" to see if he could go inside. Just 12 minutes before that, prosecutors said, Pelosi's staff ran and barricaded themselves behind a door across the hall.

"It was violent," Johnson said during the sentencing. "There were things that happened there that never should happen. I'm ashamed to have been a part of it."

Johnson also said that in the aftermath of the riot, people "suggested I should have done things if I found [Pelosi]," but insisted that he would only have "taken a picture with her" because "she's 80 years old and a celebrity in the political world."

Johnson left the court Friday smiling for cameras outside the court, seemingly striking the same pose he took with Pelosi's lectern during the riot.