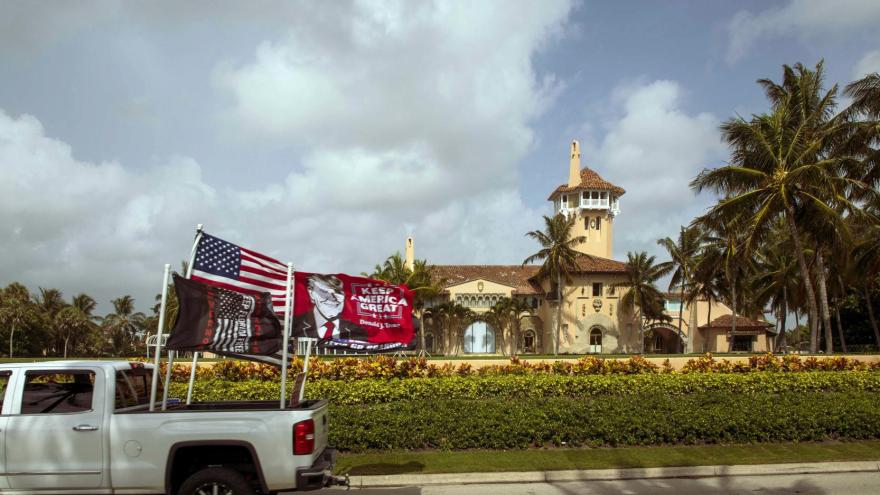 A truck displaying pro-Trump flags is dirven past Mar-a-Lago in Palm Beach, the home of former President Donald Trump, on Tuesday, Aug. 9. A newly unsealed version of the affidavit that federal investigators used to secure a search warrant for Mar-a-Lago revealed some previously unknown details about the classified materials that former President Donald Trump gave to the Justice Department under subpoena in June.

(CNN) -- A newly unsealed version of the affidavit that federal investigators used to secure a search warrant for Mar-a-Lago revealed some previously unknown details about the classified materials that former President Donald Trump gave to the Justice Department under subpoena in June.

The less-redacted version of the previously released affidavit was unsealed Tuesday by a federal judge in Florida.

It was previously known that Trump's lawyers provided one envelope to investigators, which contained 38 unique documents with classification markings, according to court filings. But the newly lifted redactions in the search warrant affidavit indicate that some of those classified files contained markings for "HCS, SI and FISA," according to court filings made public on Tuesday.

These classification markings indicate that the documents were connected to extremely sensitive government programs. "HCS" refers to human sources, or spies, that often work with the CIA. "SI" refers to signals intercepts that are typically handled by the National Security Agency. And "FISA" refers to domestic surveillance and wiretaps related to counterintelligence.

These new revelations confirm for the first time that documents related to these sensitive programs were returned to the US government as part of the June subpoena. Previous court filings indicated that when Trump voluntarily returned 15 boxes of materials to the National Archives in January, they contained 184 classified documents, including some with the same HCS, SI and FISA labels, as well as other classification markings.

Most of the information in the newly unsealed document has already been publicly disclosed, but the less-redacted version of the affidavit provides some new details about the investigation.

The now-lifted redactions in the search warrant affidavit shed some new light on the grand jury subpoena that federal investigators used to get surveillance tapes from Trump's company, which prosecutors used while probing potential mishandling of classified files at Mar-a-Lago.

A federal judge has previously said that this subpoena was served on June 24. The newly unredacted filing says the subpoena demanded that the Trump Organization turn over "any and all surveillance records videos images, photographs, and/or CCTV from internal cameras located on ground floor (basement)" between January 10 and June 24 of this year.

Trump's representatives complied with the subpoena on July 6 by giving a hard drive to FBI agents, according to the filing. It has been known that the Trump Organization handed over the surveillance footage, but the new filing adds some details about how and when they complied.