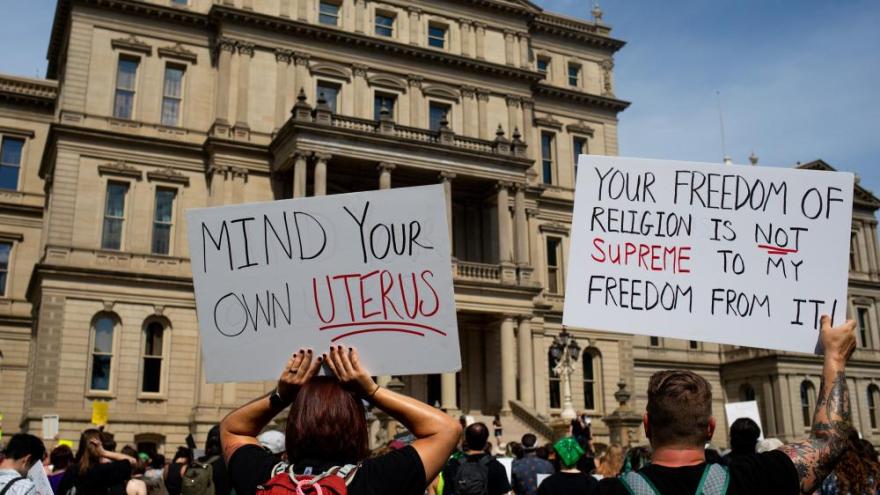 Hours earlier, an appellate court said in a separate case that county officials were free to bring such prosecutions, concluding that a lower court's ruling blocking enforcement of the pre-Roe ban only applied to state officials.

The 1931 criminal abortion ban -- which has not been enforced while Roe v. Wade's protection for abortion rights were on the books -- has been the subject of litigation in the state in the lead-up up to and after the US Supreme Court's recent ruling reversing the Roe precedent.

"Today's dangerous decision by the Michigan Court of Appeals clears a path for county prosecutors to use Michigan's extreme 1931 abortion ban to prosecute doctors and nurses and jail them for doing their jobs," Whitmer said in a statement announcing her request for the temporary restraining order.

Michigan's abortion ban states: "Any person who shall wilfully (sic) administer to any pregnant woman any medicine, drug, substance or thing whatever, or shall employ any instrument or other means whatever, with intent thereby to procure the miscarriage of any such woman" is guilty of a felony.

It has an exception to "preserve the life" of the woman but not in cases of rape of incest.

The law threatens abortion providers with prison time, according to the American Civil Liberties Union of Michigan.

Abortion rights advocates in the state, including Whitmer, had warned that it could be enforced if the Supreme Court overturned Roe. In hopes of avoiding that, Whitmer also sued to block the law from going into effect.

"The most important economic decision a woman makes in her lifetime is when and whether to have a child and this court decision threatens to rip that away from every woman in the country," the governor previously said. "It's going to be up to governors and that's why this fight is so important."

Monday's appeal court order came in a separate case filed initially in the Michigan Court of Claims by Planned Parenthood of Michigan. In that case, a judge blocked enforcement of the abortion ban in May, but on Monday, the appeals court said that the judge's ruling only applied to state officials -- leaving county prosecutors free to enforce the law.

The appellate court ruling prompted Whitmer to successfully seek a temporary restraining order from the 6th Judicial Circuit Court for the County of Oakland, which is where Whitmer had launched litigation in April seeking a ruling that would strike down the 1931 abortion ban under Michigan's Constitution.

Planned Parenthood of Michigan said in a statement after Monday morning's appeals court ruling that its doors remain open and that it "will continue to provide abortion services in accordance with the law." The organization pointed to court rules that say appeals court rulings do not take effect for 21 days to give the parties the opportunity to appeal. But, before the more TRO was issued on Monday afternoon, anti-abortion activists said county prosecutors could enforce the ban immediately.