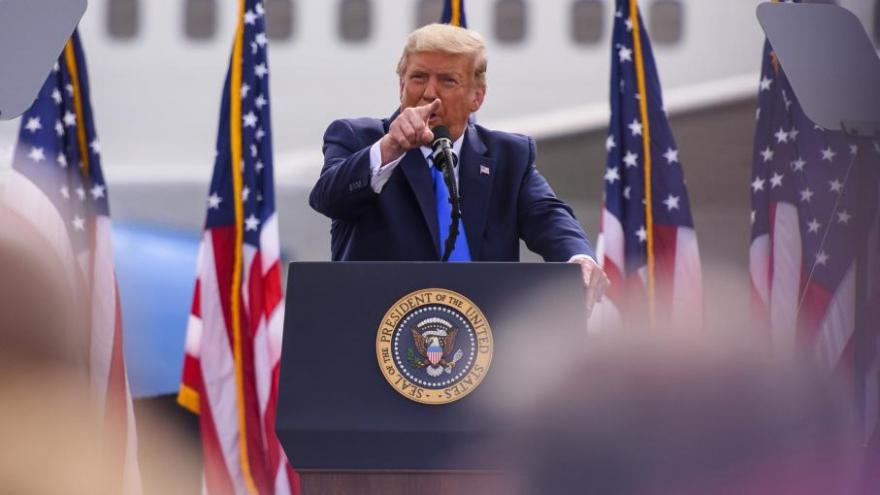 (CNN) -- A federal judge -- sensing the White House may be overriding the orders of President Donald Trump as he flails against the Russia investigation -- has given the Justice Department five days to explain Trump's true wishes on declassifying all Mueller investigation documents.

Trump has said in tweets and other statements that he's declassified all records relating to the Russia investigation and Hillary Clinton's emails.

But the White House and Justice Department said this week those pronouncements didn't declassify the records. Officials said they never received an order from the President or from Attorney General William Barr, who could also make public more information.

"It's not the White House that declassifies information. It's the President," Judge Reggie Walton of the DC District Court in Washington said in a hearing Friday. Trump has been "unambiguous" in wanting declassification of more documents.

"Don't I need to know what the President's position is and not what White House counsel's statement is?" Walton added.

CNN, BuzzFeed and the transparency group Electronic Privacy Information Center have sought access to more records and redacted text in documents from the Mueller investigation, especially following the President's tweets. Recent Trump tweets about releasing more Russia documents prompted the hearing in the CNN, BuzzFeed and EPIC cases on Friday.

Walton said in court Friday he needed to know what the President actually wanted -- and if Trump would "retract" his public statements ordering the documents' release.

The judge asked for the White House counsel's office to confer directly with Trump and report back to court by next week, when he'll hold another court hearing Wednesday. The judge also set a deadline of Tuesday at noon for DOJ to file a declaration "by the President or an individual who has conferred directly with the President" on what his declassification statements meant.

"The American public has a right to rely on what a President says his intent is," Walton said.

Walton added he wanted to resolve whether more Mueller records could be released before Election Day.

Courts throughout the Trump presidency have faced novel questions about how official the President's Twitter statements are. In some cases, judges have ruled the tweets from @realDonaldTrump are official statements by the President, such as when courts decided Trump couldn't block some Twitter users from following his public account.

But declassification has been a thornier issue for Trump, whose Twitter account has increasingly seized on disinformation, propaganda and conspiracy that might aid his political screeds as he faces reelection.

In a previous court fight over still-classified pages of the surveillance applications of former Trump adviser Carter Page, a judge ruled that White House statements weren't enough to make the documents declassified and accessible to the public. The White House said the President directed the declassification of those documents, but didn't follow through.

In a spate of tweets on the night of October 6, the President said, "I have fully authorized the total Declassification of any & all documents pertaining to the single greatest political CRIME in American History, the Russia Hoax. Likewise, the Hillary Clinton Email Scandal. No redactions!"

Trump later added, "All Russia Hoax Scandal information was Declassified by me long ago. Unfortunately for our Country, people have acted very slowly, especially since it is perhaps the biggest political crime in the history of our Country. Act!!!"

But in a sworn statement earlier this week, the Justice Department called those tweets "ambiguous Twitter statements."

When pressed by Walton on Friday, Justice Department lawyer Courtney Enlow struggled to explain if the White House counsel's office is overriding the President by not releasing classified material in the Mueller records, including FBI witness interview memos called 302s that CNN and Buzzfeed have pursued and received in monthly releases since 2019.

The court hearing highlighted a possible split between the White House counsel's office and the President it serves, with DOJ calling the White House decision not to declassify the "official position," Enlow said.

DOJ has relied on guidance from the White House counsel's office, not the President himself, Walton pointed out. Trump's personal wishes against declassification haven't been officially described to the court.