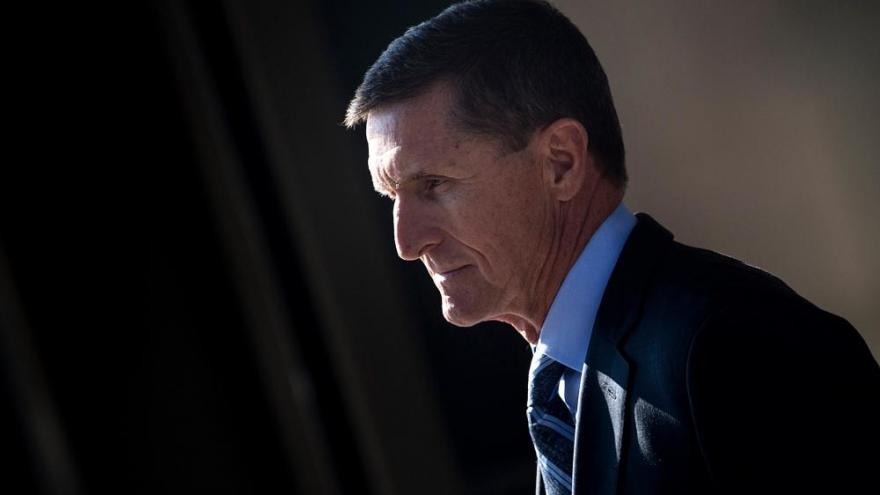 The judge overseeing Michael Flynn's criminal case opened the door for people outside of the Justice Department and the former national security adviser's legal team to comment on the Trump administration's effort to dismiss the case against him.

(CNN) -- Not so fast for a Michael Flynn exoneration.

The judge overseeing Flynn's criminal case opened the door on Tuesday for people outside of the Justice Department and the former national security adviser's legal team to comment on the Trump administration's effort to dismiss the case against him.

Judge Emmet Sullivan said third-parties may be able to file "friend of the court" briefs in the case, an extraordinary development for criminal proceedings and a development that will likely delay a ruling on the request to dismiss the case.

Sullivan made the announcement in a somewhat cryptic order five days after the Justice Department's stunning request.

His veer toward considering additional voices implies Sullivan isn't ready to drop the case and may want to do more fact-finding about what happened to it, especially after the Justice Department's about-face on Flynn last week set off a torrent of criticism from former prosecutors, defense attorneys and even witnesses claiming Attorney General William Barr had interfered because of President Donald Trump's political wishes.

Tuesday's development keeps the case alive in a way that could create even more fireworks and potentially allow people with "unique information or perspective" or other reasons to speak up, such as Mueller's former office and former Justice Department leadership, if they wanted.

CNN legal analyst Elie Honig, a former prosecutor-turned-defense lawyer in New York, said that to him, the order signaled Sullivan "has real questions and is not ready to sign onto a dismissal. It is a very unusual step for a district judge."

Flynn's legal team pushed back almost immediately, arguing against any delay and that Sullivan has no choice but to dismiss the case.

"This travesty of justice has already consumed three or more years of an innocent man's life -- and that of his entire family," Flynn's lawyers wrote. "No further delay should be tolerated or any further expense caused to him and his defense."

Flynn's defense lawyers acknowledged that former Watergate prosecutors had sought to be heard in the case.

"There are countless people -- including former prosecutors on both sides of the parties -- who would like to express their views," Flynn's lawyers wrote, "but there are many reasons there is no provision for outsiders to join a criminal case in this Court."

Sullivan previously accepted Flynn's sworn admission that he was guilty of lying to the FBI. The judge has been unpredictable and harsh toward Flynn for misleading the administration and the FBI while serving as Trump's first national security adviser. After almost two years cooperating with special counsel Robert Mueller and other federal investigations following his guilty plea, Flynn claimed he had been set up by prosecutors and tried to get out of the conviction as his sentencing neared.

Political appointees under Barr revealed last week they were convinced by internal FBI documents that Flynn shouldn't face a criminal charge because he shouldn't have been investigated.

Several key former Justice Department officials have complained in newspaper op-eds and open letters about the move to dismiss the charge against Flynn. They have alleged Barr was dropping the case for political reasons, so the President and his supporters could undercut the Russia investigation in an election year. Many attacked the DC US Attorney's legal brief arguing to dismiss the case, because of what they called twisted, thin or too-defense-friendly reasoning.

Barr has said there was no political influence in the decision and said the case was dropped because the lies that Flynn was prosecuted for telling investigators weren't actually "material" or influential to an investigation.

"A crime cannot be established here. They did not have a basis for a counterintelligence investigation against Flynn at that stage," Barr said in an interview last week with CBS News, referring to the FBI.

"Given the current posture of this case, the Court anticipates that individuals and organizations will seek leave of the Court to file amicus curiae brief," Sullivan wrote on Tuesday.

It is not yet clear if Sullivan will allow briefs from former prosecutors, or witnesses like former DOJ national security head Mary McCord and former acting Attorney General Sally Yates, whose recounting of events the Justice Department had relied upon in their brief. McCord wrote on Sunday her statements to investigators had been misconstrued.

Sullivan said he will give more guidance on how third parties can submit their briefs to the court about the case "at the appropriate time." Two filings came into the case this week from unknown parties under seal, according to the court record.

This story and headline have been updated with additional information about the case.