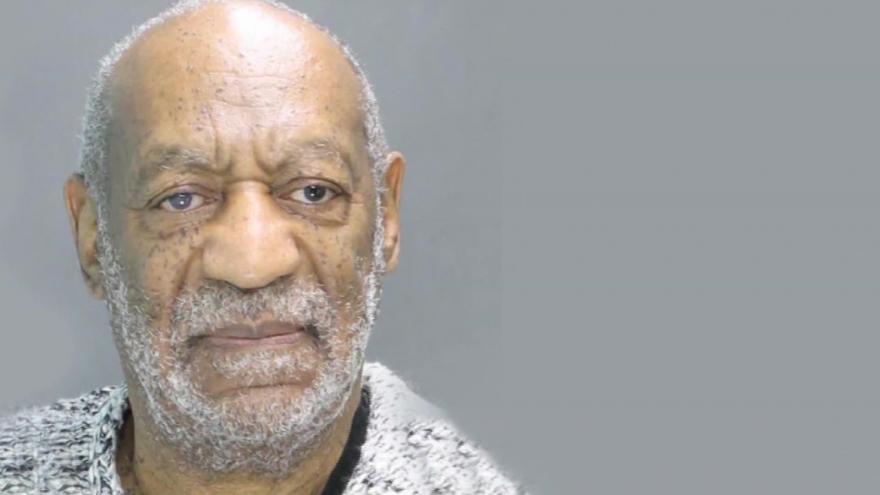 Bill Cosby has been sentenced to three to 10 years in state prison for drugging and molesting a woman at his suburban Philadelphia home.

Judge Steven O'Neill sentenced Cosby on Tuesday, five months after his conviction in the first celebrity trial of the (hash)MeToo era.

Prosecutors were seeking a sentence of five to 10 years in prison. The defense asked for house arrest.

The 81-year-old comedian did not make a statement in court. Cosby sat back in his chair, his head on the headrest, as the sentence was read.

The entertainer once known as "America's Dad" was convicted in April of sexually assaulting Temple University athletics administrator Andrea Constand in 2004.

Constand is one of about 60 women who have accused Cosby of sexual misconduct.

NORRISTOWN, Pa. (AP) — Bill Cosby faces a good chance of being sent to prison Tuesday, when a judge is expected to sentence the TV star who was convicted of drugging and sexually assaulting a woman.

Cosby, 81, will have the opportunity to speak in court before he is sentenced.

The once-beloved actor and comedian, dubbed "America's Dad" for his role as Dr. Cliff Huxtable on the top-ranked, 1980s-era "Cosby Show," faces anything from probation to 10 years in prison for drugging and molesting Andrea Constand, a Temple University basketball administrator, at his estate near Philadelphia. She went to police a year later, only to have a prosecutor turn down the case.
In the years since Constand first went to police in 2005, more than 60 women have accused Cosby of sexual misconduct, though none of those claims have led to criminal charges.

Cosby is the first celebrity of the #MeToo era to go on trial, and the first to be convicted.

It's a reckoning that accusers and prosecutors say has been decades in the making.

"The victims cannot be un-raped. Unfortunately, all we can do is hold the perpetrator accountable," said Gianna Constand, the trial victim's mother, who testified Monday that her daughter's buoyant personality was forever changed after the attack.

The hearing is set to conclude Tuesday after testimony from a defense psychologist who believes Cosby is no longer a danger, given his age, and should not be branded a "sexually violent predator."

"The suggestion that Mr. Cosby is dangerous is not supported by anything other than the frenzy," Green said, as demonstrators gathered outside the suburban Philadelphia courthouse.

Being labeled a sexually violent predator would make him subject to mandatory lifetime counseling and community notification of his whereabouts.

On Monday, Kristen Dudley, a psychologist for the state of Pennsylvania, testified that Cosby fits the criteria for a sexually violent predator, showing signs of a mental disorder that involves an uncontrollable urge to have non-consensual sex with young women.

Montgomery County District Attorney Kevin Steele said Cosby would no doubt commit similar crimes if given the chance, warning that the former TV star seemingly gets a sexual thrill out of slipping women drugs and assaulting them.

"To say that he's too old to do that — to say that he should get a pass, because it's taken this long to catch up to what he's done?" Steele said, his voice rising. "What they're asking for is a 'get out of jail free' card."

Cosby, he said, has shown repeatedly that he feels no remorse over his actions. And he said the sentence should send a message to others.

"Despite bullying tactics, despite PR teams and other folks trying to change the optics, as one lawyer for the defense put it, the bottom line is that nobody's above the law. Nobody," the district attorney said.

He urged a five- to 10-year prison sentence.

After testifying for several hours at two trials, the first of which ended in a hung jury, Constand spoke in court Monday for just two minutes.
"The jury heard me. Mr. Cosby heard me. Now all I am asking for is justice as the court sees fit," said Andrea Constand, who submitted a much longer victim-impact statement that wasn't read in court.

The AP does not typically identify people who say they are victims of sexual assault unless they come forward publicly, which Constand and other accusers have done.

Cosby's side didn't call any character witnesses, and his wife of 54 years, Camille, was not in court.

Cosby became the first black actor to star in a prime-time TV show, "I Spy," in 1965. He remained a Hollywood A-lister for much of the next half-century.

NORRISTOWN, Pa. (AP) — Bill Cosby faced the start of a sentencing hearing Monday at which a judge will decide how to punish the 81-year-old comedian who blazed the trail for other black entertainers and donated millions to black causes but preyed on at least one young woman and perhaps many more.

Cosby was the first celebrity to go to trial in the #MeToo era and could be the first to go to prison — perhaps for the rest of his days — after being convicted in April of drugging and sexually assaulting former Temple University employee Andrea Constand at his suburban Philadelphia home in 2004.

Judges can't help being influenced a little by the "optics" of a case — that it, how it is going to look to the public, said Daniel Filler, dean of Drexel University's Kline School of Law.

At the end of the potentially two-day hearing, Montgomery County Judge Steven T. O'Neill could sentence Cosby to as many as 30 years in prison or send him home on probation. The state guidelines for someone like Cosby, with no prior convictions, call for about one to four years behind bars.

"Obviously, the allegations are serious, and, except for his age and poor health, would normally warrant some jail time," said Samuel Stretton, a veteran defense lawyer not connected to the case.

Cosby is legally blind and uses a cane, something his lawyers are certain to point out along with his achievements and philanthropy. Prosecutors hoped to call some of his other accusers to paint Cosby as a sexual predator deserving of prison.

Whatever the sentence, Cosby is likely to be deemed a sexually violent predator and will have to undergo monthly counseling the rest of his life, in prison or out. Neighbors and schools will be warned he is living nearby.

In the years since Constand first went to police in 2005, more than 60 women have accused Cosby of sexual misconduct, though none of those claims have led to criminal charges.

Two of those women, Lise-Lotte Lublin and Chelan Lasha, said Sunday at a Philadelphia news conference that they want prison for him and hope they get to make impact statements at the sentencing.

"I really think it's important that he spend some time behind bars," said Lublin, who said Cosby assaulted her when she was 23 in 1989. "At some point, he should acknowledge what he's done, and do the time for the crime."

Monday morning, just a few hours before the sentencing hearing was to begin, Constand tweeted Ephesians 4:26, a Bible verse about letting go of anger: "Be wrathful, but do not sin; do not let the sun set while you are still angry; do not give the Devil an opportunity."

Cosby, who grew up in public housing in Philadelphia, became the first black actor to star in a prime-time TV show, "I Spy," in 1965. He remained a Hollywood A-lister for much of the next half-century, hitting his peak in the 1980s with the top-rated "Cosby Show" as the warm, wisecracking dad, Dr. Cliff Huxtable.

But behind the scenes, according to testimony, the married star sought out sexual encounters with young women, including actresses he offered to mentor, models seeking a part on his shows, and flight attendants he met in his travels. He also acknowledged obtaining quaaludes in the 1970s to give to women before sex.

The Associated Press does not typically identify people who say they are victims of sexual assault unless they come forward publicly, which Lublin, Lasha and Constand have done.