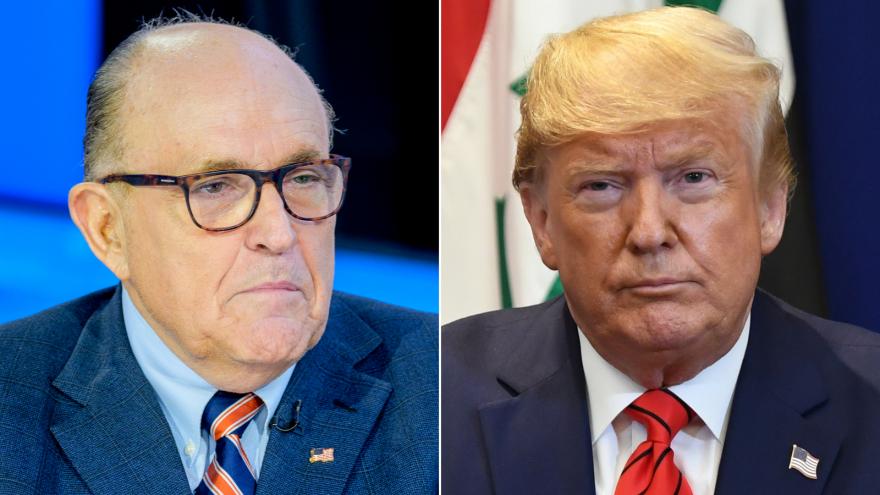 Trump's statements to his supporters before the riot "is the essence of civil conspiracy," Judge Amit Mehta wrote in a 112-page opinion, because Trump spoke about himself and rallygoers working "towards a common goal" of fighting and walking down Pennsylvania Avenue.

"The President's January 6 Rally Speech can reasonably be viewed as a call for collective action," Mehta said.

Democratic members of the House and police officers who defended the US Capitol on January 6 sued Trump last year, claiming he prompted his supporters to attack. Friday, Mehta wrote that the three lawsuits could move to the evidence-gathering phase and toward a trial -- a major loss in court for Trump.

"To deny a President immunity from civil damages is no small step. The court well understands the gravity of its decision. But the alleged facts of this case are without precedent," Mehta wrote.

"After all, the President's actions here do not relate to his duties of faithfully executing the laws, conducting foreign affairs, commanding the armed forces, or managing the Executive Branch," Mehta added. "They entirely concern his efforts to remain in office for a second term. These are unofficial acts, so the separation-of-powers concerns that justify the President's broad immunity are not present here."

While he homed in on Trump's legal liability, the judge ruled in favor of three close allies to Trump who also spoke at the rally on January 6 -- his attorney Rudy Giuliani, his son Donald Trump Jr. and Republican Rep. Mo Brooks, saying he would dismiss the claims against them.

When the Senate failed to convict Trump last year in the impeachment proceedings examining his role in the attack, Minority Leader Mitch McConnell -- who voted against convicting Trump -- noted that "civil litigation" was an avenue through which Trump's conduct could be addressed.

Two of the lawsuits were brought by Democratic House members, while a third was filed by Capitol Police officers.

The lawmakers allege that they were threatened by Trump and others as part of a conspiracy to stop the congressional session that would certify the 2020 presidential election on January 6, 2021, according to the complaints. They argue that Trump should bear responsibility for directing the assaults.

Trump's legal team is likely to appeal the decision, which was made at the trial-level DC District Court. Representatives for Trump didn't immediately respond to requests for comment.

Mehta's ruling on what he calls a "one-of-a-kind case" sets up a rare instance where the former President could face concrete consequences for the insurrection.

But Mehta's opinion, essentially melting away the protections of the presidency and the First Amendment because of the context of Trump's speech and specific words and actions that day, could have further implications, including creating a new avenue to subpoena Trump and ask him questions and establishing where immunity for presidents ends.

At this time, there are no public indications that the Justice Department's criminal investigation into January 6, which includes several sets of conspiracy charges and a sedition case, has reached Trump. And after Republican lawmakers blocked Trump's impeachment conviction, the GOP has largely fallen back in line behind the former President. The two House Republicans now serving on the committee to investigate the insurrection have faced calls for their ouster from the party, and Trump may very well be Republicans' 2024 nominee for the White House.

The decision, Friday, however, sets in motion a path to the judge weighing the factual allegations and evidence against Trump in the cases as well as possible civil trials months or years from now, where Trump is at the defense table.

Lawyers for the Democratic lawmakers and police were elated with the ruling Friday, though they likely face a long road of additional court tangles ahead.

"Today is a major victory for the rule of law, and demonstrates just how important the courts are for ensuring accountability," said Joseph Sellers, who represents a group of Democratic members of Congress that was first to allege a civil conspiracy against Trump in court.

The NAACP, working alongside Sellers, also applauded the ruling, and the group's president Derrick Johnson called for accountability for Trump and the right-wing groups.

Matthew Kaiser, a lawyer for Democratic Rep. Eric Swalwell, called it a "great ruling" to potentially be able to take Trump to trial.

And Patrick Malone, representing the police officers, called it a victory for democracy.

"It's good to see that no one is above the law. Everyone should be held accountable for their actions," Malone's client, the Capitol Police Officer James Blassingame Jr., said in a statement.

Swalwell said in a statement that he would seek to depose Trump and gather evidence about January 6.

Mehta wrote that it's plausible the lawsuit could prove Trump entered into an agreement with far-right groups the Proud Boys and the Oath Keepers, who are criminally charged for conspiracy and also named in the lawsuit.

The judge noted how Trump told the Proud Boys to "stand back and stand by" at a debate before the election, and that he likely was aware of the Oath Keepers attending his rallies and of violence planned because of his election loss.

The cases will proceed against the Oath Keepers organization and against Enrique Tarrio, the recently incarcerated leader of the Proud Boys. They sought to get the case dismissed but the judge concluded that the allegations -- of a conspiracy between Trump and the extremist groups and leaders -- were plausible enough to allow the litigation to move forward.

Partial victory for other Trump allies

Some of his allies who were named as co-defendants succeeded in getting the civil suits against them dismissed.

This includes his eldest son and his former attorney, who were named as defendants in some of the cases, but successfully argued that the lawsuits should be thrown out.

The judge indicated he would also eventually dismiss the case against Brooks, an Alabama Republican.

They have all denied wrongdoing related to January 6.

In the ruling, Mehta said the case against Brooks was weak enough that he would simply dismiss it if he asked him to do so, teeing up the congressman for a victory.

"Brooks's remarks on January 6th were political speech protected by the First Amendment for which he cannot be subject to liability," Mehta wrote.

But Mehta on Friday sidestepped the question of whether Brooks should have been protected in the litigation by the Justice Department -- because, according to the congressman, he was acting in his official duties as an elected official when he spoke at the Trump rally before the riot.

The Justice Department so far has refused to protect Brooks, a revealing position for the agency that is conducting its own sweeping investigation of January 6.

The Department argued that Brooks' role at the rally was "campaign activity" and not related to his official duties. Still, Brooks had asked Mehta to rule that he was acting as a government official and thus shield him from liability. Mehta said on Friday he would defer deciding on that issue.

Regarding Giuliani, the judge said "there is little doubt" that he "was involved in a conspiracy" to peddle disinformation about the 2020 election -- but that he couldn't be held liable for the laws at issue in this lawsuit.

Democrats and police officers who filed the lawsuits "fall short" of establishing that Giuliani directly conspired to stop Congress from certifying the election on January 6 by force or intimidation, Mehta ruled.

Even though Giuliani spoke at the "Save America" rally before the riot, and told the crowd, "Let's have trial by combat," the judge ruled that those comments weren't strong enough to establish a conspiracy.

"Critically, Giuliani uttered no words that resembled a call to action. 'Trial by combat' was not accompanied by a direction to do anything," Mehta wrote, calling it "constitutionally protected speech," and pointing out that Giuliani didn't know Trump would direct his supporters to march on the Capitol.

The judge said the allegations against Trump Jr. were even weaker, and thus should be dismissed.

"The allegations against Trump Jr. are insufficient to make him a co-conspirator in a plan to disrupt Congress from performing its duties," Mehta wrote.

That situation was much different than Trump's -- who not only spoke about the crowd marching to the Capitol and fighting, but also failed to tell his rioting supporters to stand down as the violence unfolded. Instead, Trump criticized then-Vice President Mike Pence, presiding over the electoral college certification, on Twitter, 12 minutes into the attack.

"When the President said to the crowd at the end of his remarks, 'We fight. We fight like hell and if you don't fight like hell, you're not going to have a country anymore,' moments before instructing them to march to the Capitol, the President's speech plausibly crossed the line into unprotected territory," Mehta wrote.