Judge says 'there appears to be intentional discrimination' in Arbery jury selection, but allows trial to move forward with 1 Black juror 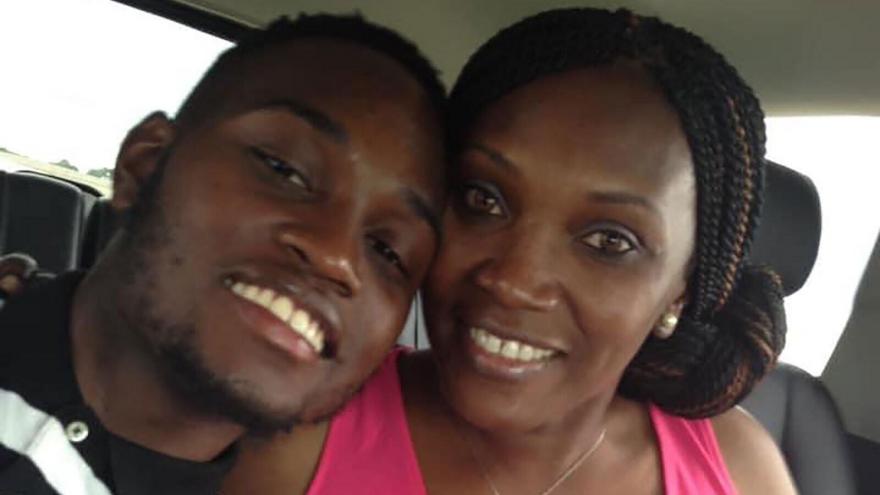 The judge in the Ahmaud Arbery murder trial says the defense appears to be discriminatory in selecting the jury but that the case could go forward. Arbery is seen here with his mother, Wanda Cooper Jones.

(CNN) -- After a long and contentious jury selection process in a coastal Georgia county in preparation for the trial for Ahmaud Arbery's killing, a panel of 12 people was chosen Wednesday -- consisting of one Black member and 11 White members.

The jury was selected after a two-and-a-half-week selection process that ended with prosecutors for the state accusing defense attorneys of disproportionately striking qualified Black jurors and basing some of their strikes on race.

Judge Timothy Walmsley said the defense appeared to be discriminatory in selecting the jury but that the case could go forward.

"This court has found that there appears to be intentional discrimination," Walmsley said Wednesday.

The court heard arguments for more than two hours about why defense struck the potential jurors before Walmsley ultimately denied the state's motion and ruled there were valid reasons, beyond race, for why the jurors were dismissed.

"One of the challenges that I think counsel recognized in this case is the racial overtones in the case. ... This is sort of the continuation of a conversation that I think will continue for a long time, with respect to this case," the judge said, but added that in Georgia, "all the defense needs to do is provide that legitimate, nondiscriminatory, clear, reasonably specific and related reason," for why they struck a juror and he said the defense met that burden.

Of the 16 total jurors selected -- including the four alternates -- five are men and 11 are women, according to the pool reporter inside the courtroom.

Wanda Cooper-Jones, Arbery's mother, said as she left the courthouse Wednesday she was "shocked" there was only one Black juror.

"I mean, that was devastating," she said.

The jurors must decide whether Gregory McMichael and his son, Travis McMichael, along with their neighbor William "Roddie" Bryan Jr., are guilty of malice and felony murder. They have pleaded not guilty. The defendants also face charges of aggravated assault, false imprisonment and criminal attempt to commit a felony.

Lee Merritt, an attorney for Arbery's family, wrote on Twitter about the number of Black potential jurors who remained, saying in a post, "Only one of the 16 potential jurors is African-American."

Jason Sheffield, an attorney for Travis McMichael, called the selection process "exhaustive" but said he was pleased with the outcome and felt the selected jurors would be fair.

"We are very pleased that we have been able to select now 16 members of this community," Sheffield said as he exited the courthouse. "Where this community can now decide the pending issues of this indictment, and we truly believe that they will do so fairly and in keeping with what we all understand justice to be about."

The selection process was a long one

Arbery's killing sparked national outrage after a video of his shooting was made public. The 25-year-old Black man was out for a jog in Brunswick on February 23, 2020, when he was fatally shot.

The McMichaels said they were conducting a citizen's arrest on Arbery, whom they suspected of burglary, and that Travis McMichael shot him with a shotgun in self-defense. Bryan, who recorded the video, hit Arbery with his truck after he joined the McMichaels in chasing Arbery, a Georgia Bureau of Investigation agent has testified.

It wasn't until video of the shooting surfaced that the men were arrested.

Finding people to sit on the panel that will deliver the verdicts was a challenging and lengthy process that the judge himself seemed to grow frustrated with last month.

From the roughly 1,000 people who were summoned as part of the jury selection pool, fewer than half turned up.

No official reason was given for the low turnout, but among those who did come, many said they had already formed strong opinions about the case, knew the defendants or were scared to sit, pointing to the potential consequences the outcomes of the case could have on the Glynn County community.

"I think it would be naive to think there couldn't be real-world repercussions," one woman told attorneys last month in the early days of the selection process.

The jury will be impaneled just before opening statements. The judge told jurors to report Friday morning at 9 a.m.

Defense attorneys previously expressed concern over not only how many people didn't show, but also who was missing among those who did.

"It would appear that White males born in the South, over 40 years of age, without four-year college degrees, sometimes euphemistically known as 'Bubba' or 'Joe Six Pack,' seem to be significantly underrepresented," defense attorney Kevin Gough, who represents Bryan, told the court Friday.

"Without meaning to be stereotypical in any way, I do think there is a real question in this case whether that demographic is underrepresented in this jury pool," Gough added. "And if it is, then we have a problem with that."

Sheffield, the attorney for Travis McMichael, brought up demographics again this week, stressing that the low turnout of people during the jury selection process meant the pool didn't "fairly reflect the accused in this case, where the accused can't look across the courtroom and see persons that are similarly situated to themselves."

But a jury needs to be representative of only race and gender, not socioeconomic background, said CNN legal analyst Page Pate. There usually tends to be diversity of economic backgrounds among those who are summoned, Pate said.

"Participation in the jury pool is important, but only so much to establish diversity of race and perhaps gender, but not 'Bubba' background, whatever that may be," Pate said. "I've represented doctors who have gone on trial. Now, was my jury made up of a bunch of doctors? Of course not."

"Even if there were no 'Bubbas,' as long as the lawyers are not removing people solely because of race, there's really no problem," Pate said. "You have no legal right to a 'Bubba'-rich jury pool."